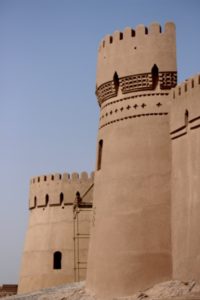 The ancient citadel of Bam is nothing like what it used to be, before th 2003 earthquake, but there are many other unknown, yet interesting things to do in the desert around this lovely town

For the first time in five weeks we had made a hotel reservation. We had called ahead to the guesthouse of Mr Akbar, in Bam, just to make sure we had a place to sleep. Bam doesn’t have many hotel options. But when we got to the guesthouse, the place was abandoned. Well, the door was open, there was a kettle on the stove, boiling water, but there was absolutekly nobody around. Hmmm. Bam doesn’t have many hotel options, as I said. But a little patience paid off. We used the boiling water to make ourselves a cup of tea, and waited. Fifteen minutes later, Mr Akbar turned up. 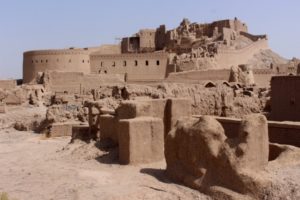 the citadel of the Arg-e Bam 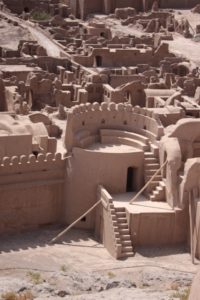 view from higher up 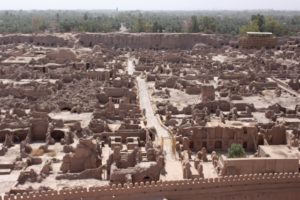 sadly, this is still mostly an earthquake site 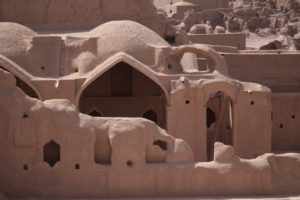 some buildings have been restored 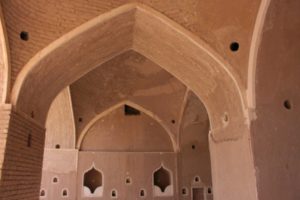 and these niches are original

We had come to Bam to see the Arg-e Bam, touted as the biggest adobe structure in the world, and until the devastating earthquake of 2003 one of Iran’s top tourist destinations. The earthquake put an end to that, put an end to pretty much everything in Bam; it killed more than 25,000 people, it destroyed 80-90% of Bam’s infrastructure and houses, and predictably, destroyed most of the ancient mud-brick built citadel. Thirteen years later, a lot of effort has gone in restoration, still in full swing. But having seen photos of the original, pre-earthquake Arg, it is clear that it will never be the same again. Much of the site just looks what it is, the result of an earthquake, whilst parts of the old bazaar, some of the walls and watch towers, and much of the inner citadel, look too new to be real; the materials used are the same, mud and straw plaster, but they are too obviously recent constructions. Unlike in Rayen, you are not free to walk around, but forced to follow a fixed route, fenced off by metal bars. The higher part of the citadel is off limits; putting up our most innocent faces, and using a discontinuity in the fencing as excuse, we try to climb our way to the top anyway, but we are friendly, but decidedly, told that we are not allowed here.

The impression that remains is one of sadness; something that used to be so beautiful, unique really, is now mostly rubble – despite all the hard work. 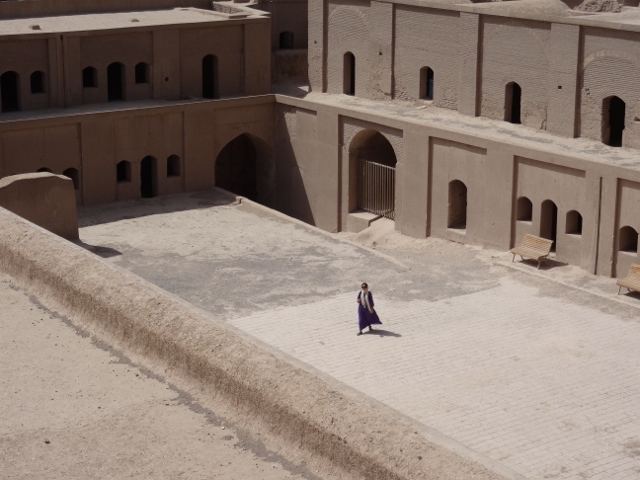 the barracks belonging to the citadel 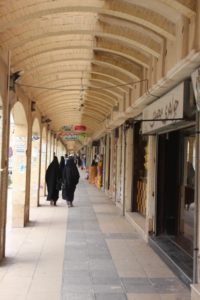 the modern Bam bazaar, entirely built after the earthquake 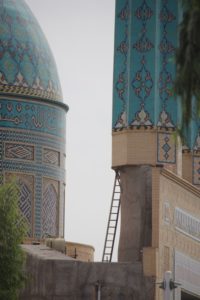 The town itself is a bit the same. Here and there, an old compound remains, totally destroyed, with seemingly no effort to rebuild, but almost everything wlse is new, the bazaar, the houses, the offices. Yet, the people themselves are upbeat, welcoming, friendly. Obviously, everybody older than 13 years has suffered, but their resilience is remarkable.

And, quite unexpectedly, Bam had more to offer. The day after we arrived Mr Akbar asked us whether we wanted to join him, to see a few things in the desert, because he had to go to a meeting in nearby Narmashir, anyhow. Why not, so we got in the car. 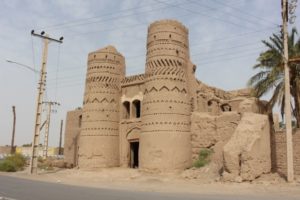 the Qale Shahid, in the village of the same name

The first stop was in Qale Shahid, a small village built around a Safavid castle, some 500 years old. Decrepit, falling apart, and not much restored, it was nevertheless a nice place, with an impressive gate – although much of the area behind the gates had suffered from villagers who had expanded their own plots at the expense of the old castle grounds. But this turned out to be a gathering point only, where we were picked up by some others, who drove us to what is localy known as the Sassanid Castle. Sassanid means the Second Persian Empire, some 1500 years old, which was evident: not much of the mud-brick walls of the castle remained. However, around the castle had been a settlement, probably originating from the same time, and inhabited until Qajar times, perhaps 150 years ago. And these buildings had been much better preserved. Many still had roofs, some even the remnants of ancient badgirs, the wind towers we have seen in Yazd, designed to capture the slightest breeze. Alltogether a very interesting site, where we would have loved to spend more time. 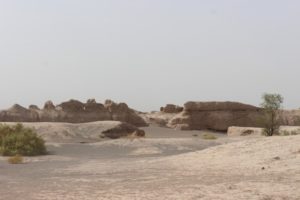 view of what is known as the Sassanid Castle 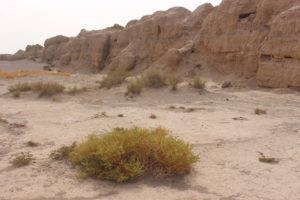 castle walls are an upward extension of steep sandstone outcrops the castle used to have an extensive palm plantation 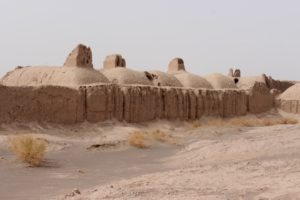 houses from the ancient settlement, with early badgir towers, to catch the wind and cool the house 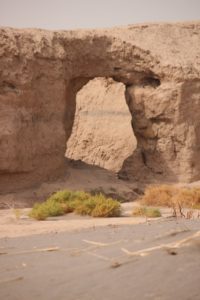 man-made gate in the sandstone wall 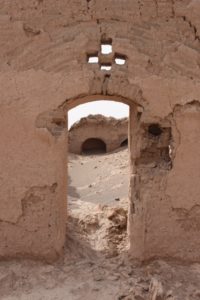 remains of walls and doors in the settlement 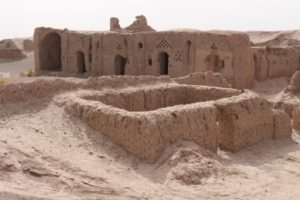 Which we didn’t get, because we now had to head to the meeting. This turned out to be a meeting with the local governor, where a representation of the tourist industry of the region – some 10-12 people – came to plead for investment for developing the Sassanid Castle as a tourist destination (or at least that’s what I understood). Together with the various tour guides and operators we were ushered into the governor’s office for a meeting that lasted well over an hour – and of which we understood nothing, of course! But the meeting in itself was a cultural experience, several of the men – all men – got time to speak, and did so quite coherently, for 10-15 minutes each, without Powerpoint, without notes, and without ever loosing the line of their argument, or stuttering ‘eh, eh’ or similar expressions. And without being interrupted. Sure, it took a while, but the respect and politeness of everybody in that room was something I haven’t experienced often in our Western meeting culture. 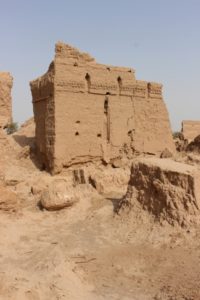 part of a building in the caravanserai

The meeting over, we all – except the governor – headed to the house of one of the men, where we spent two hours having lunch, delicious home-cooked food. After which, another surprise, we all got back in cars again, and drove off into the desert, to an old caravanserai, called As Adiye. An impressive structure in the past, inside an enormous walled area, this building, or group of buildings, had also largely collapsed, but there was enough left to imagine what it must have looked like: crennulated towers in the corners, six different enclosures, several of those with two floors – downstairs for the animals, upstairs for the traders and the merchants who used these places on their travels between east and west. 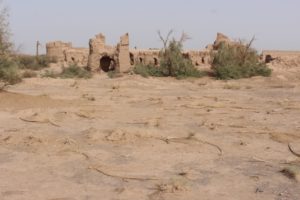 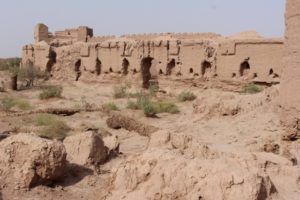 a significant part of the walls still in tact 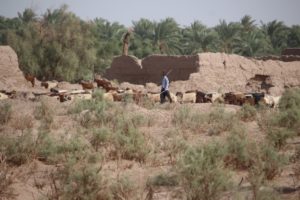 the current users are shepards and sheep, only…. 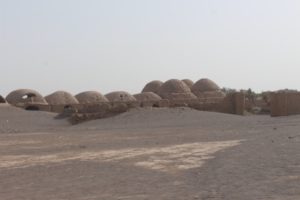 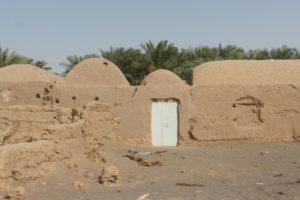 same village, door in the front and dade palm plantation in the back

Oh, and to get to the caravanserai, we had to walk through a dade palm plantation. This is harvest time, but luckily, not all dades had been collected from the trees yet. There is nothing better than eating fresh ripe dates straight from their trees. Even after lunch. Great day, great experience, great entertainment.

next: all the way back to Kashan 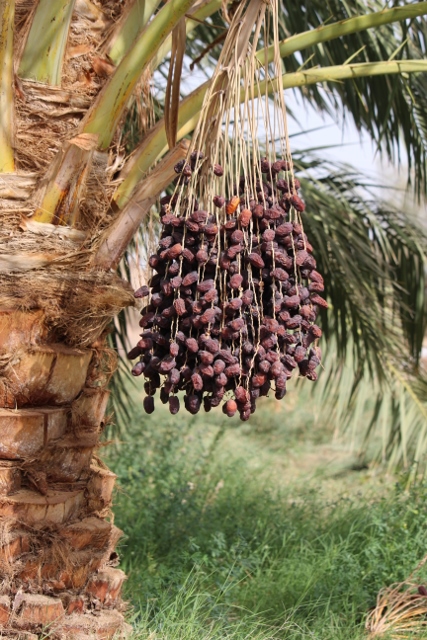 they don’t come any fresher, these dades