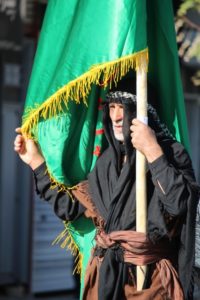 a man leading the procession in Bijar

We witnessed the processions for Moharram, and for the final day, Ashura, in Bijar, which was a unique and deeply moving experience.

Every city, town and village in Iran will commemorate the slaying of Iman Hossein in 680 AD, with a ten day mourning period called Moharram, culminating in the one-but-last day, Tasu’a, and especially the last day, Ashura. In almost all these places, people express their sorrow by thumping their chests, or self-flagelating their shoulders and their backs with short chains. (In the past, they would even cut their heads, so that blood was steraming down their tunics.) Just in a few places in Iran, they do even more, they cover themselves with mud. Bijar is one such place. Which is why we went to Bijar for Ashura. 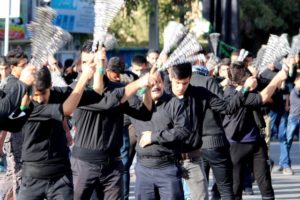 chains are being used for self-flagelation 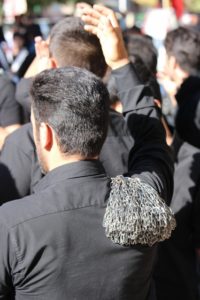 they are real chains, no doubt about that 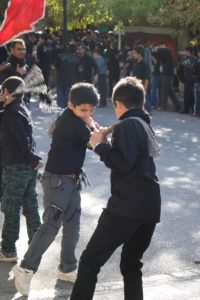 and the children – boys – have smaller chains, but still… 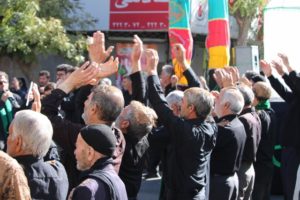 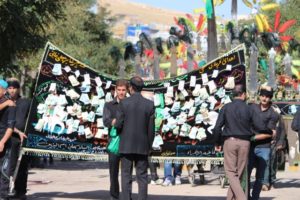 during the procession, donations are being collected 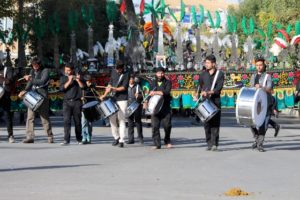 the drum band, or one of the many 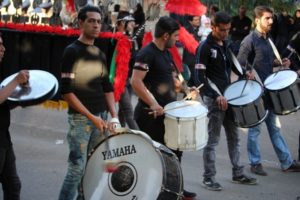 providing a solemn rythm to the procession 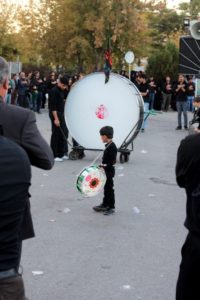 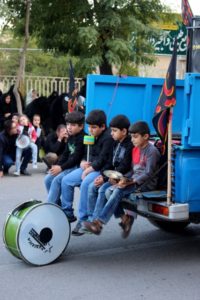 and the boys, too, in for a break 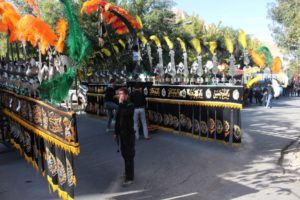 the metal structures, all decorated with plumes and feathers 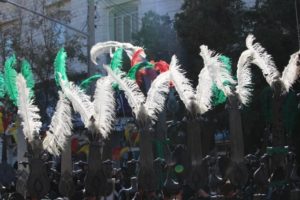 feathers and plumes, in close-up 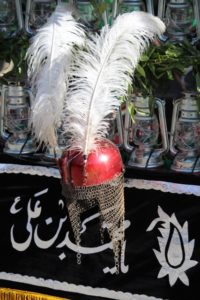 one has a helmet mounted, for later use 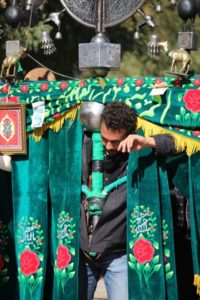 and carrying these things is a real effort, that’s obvious

We arrived the evening before Tasu’a. Heading into town, we weren’t the only ones, lots of people went the same direction. As it turned out, the first procession had already started. A procession consists of many different groups of men – only men, at least for now -, some big, perhaps 50 people or more, others small, maybe ten or less. Everybody is dressed in black. Many of the groups have a car accompanying them, with a huge loudspeaker, blaring out chants about Hossein. Certain chants are picked up by the men in the group, as sign to collectively beat their chests, or their backs and shoulders. There is something very impressive in seeing so many people, at the same time, hit themselves, at the beat of a drum, at the rythm of a chant. Smaller groups push the heavy metal sculptures that we have seen in the previous days, now decorated with colourful feathers and flags, forwards, at certain times lifting the sculpture from is carriage, and hanging it onto one individual, who will single-handedly carry the weight, for a few meters, or as many as he can. Also, a very impressive sight. Then there are the drum bands, about ten men with various sizes drums which move in between the other groups; often, there is one other instrument, mostly a flute, but I have also seen a saxophone, playing a sensitive melody as a contrast to the drums. The highlight of the procession is the group that plays out the battle of Karbala, a few men, some of them on horseback, in red and yellow representing the bad guys, and another, in green, representing Hossein. Hossein is accompanied by a couple of children, also in green, who are invariably beaten by the bad guys every time the battle is re-enacted. Most of the play is actually the exchange of words between the bad guys and Hossein, words that, despite the microphones, are often drowned out by the sounds of the other groups, the car-mounted loudspeakers, the chanting and all the other noise – to the effect that alongside the procession a normal conversation is impossible. 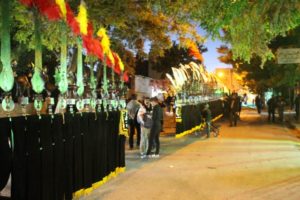 the procession continues to well in the evening 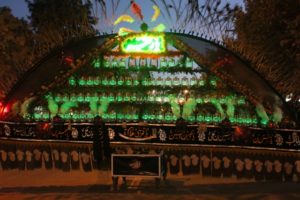 lights go on, on some of the participating structures 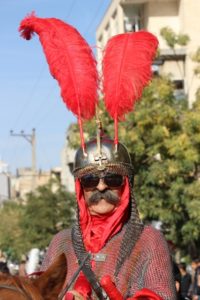 this is the bad guy 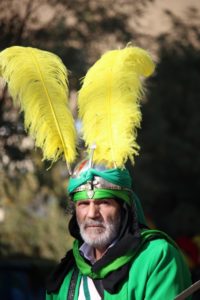 and this is the good guy, Hossein 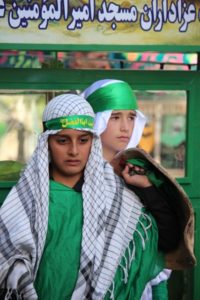 and some of Hossein’s child soldiers who invariably are being beaten by the bad guys 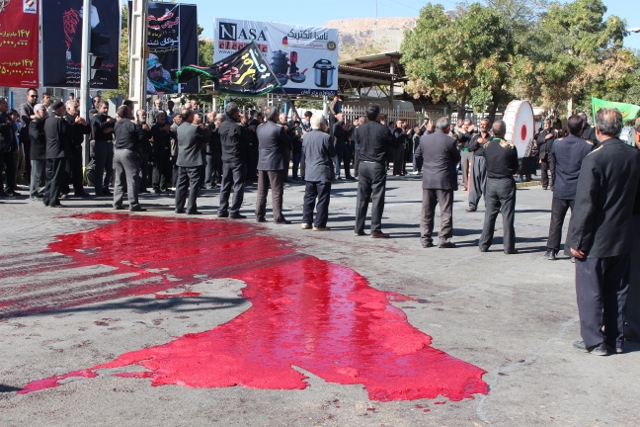 here too, a large group of men collectively mourning 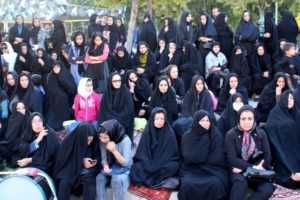 the spectators along the route, many rows thick

The whole thing has something of a carnaval parade, except that the atmosphere is – despite the noise – introvert, humble, sombre, in line with the idea of mourning. The moving forward goes very slowly, every so many meters the whole caravan stops and repeats their activity, whether on horseback or with the chains. For the side of the street is packed with spectators: the women and children (although plenty of small boys walk in the parade, too, complete with their own, smaller and lighter, chains). Some have brought chairs, other have spread a carpet; they are here for the long haul, so much is clear. And they are actively participating in the mourning, too, I have seen many women cry along the route, like I have seen men cry, genuinely cry, whilst performing their rituals in the parade. And something else: Bijar has about 45,000 inhabitants, and they seem to be all here, the size of the parade and the number of spectators is, once again, really impressive. 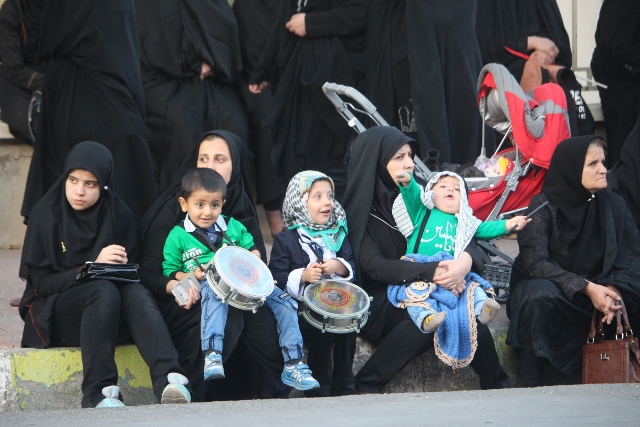 and some young spectators, too 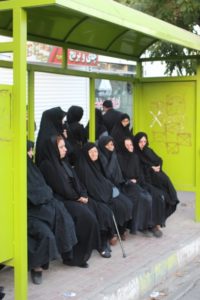 some of the spectators have occupied the bus stop 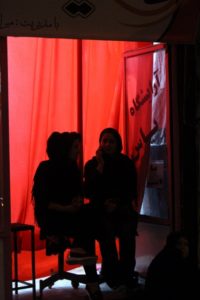 others brought chairs outside 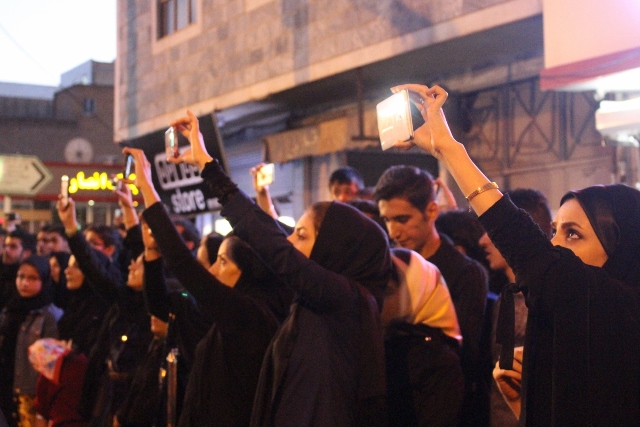 and I am not the only one taking photos…. 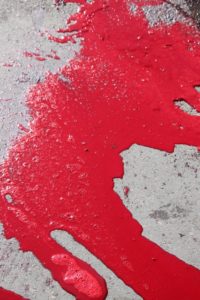 the result of a sheep slaughtered 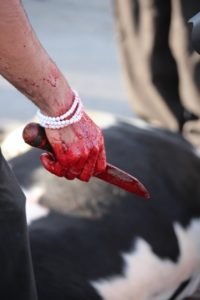 somebody has to do it, I presume 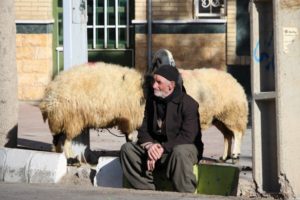 some sheep are awaiting their turn

The procession continued for hours on end, into the evening. The lights go on, which adds to the atmosphere. And the next day, Tasu’a, the entire town assembles once again, and continues where they left the day before. Only now we were present for the beginning of the parade, at around three in the afternoon, and witnessed some of the preparations. Which include the slaughtering of several sheep and cows, and drain the blood in rivulets across the streets. Obviously part of the ritual, as well, and something nobody winks at, really; small children find it one of the more exciting parts of the happening, and need to see every gory detail, before the rush to the next sheep ready for the knife. And indeed, paying more attention, we now notice sheep tied up all along the route, awaiting their turn. Every culture has their own ways, their own rituals.

In the mean time, people go round with tea, or cold drinks, or sweets, or dates, which are being presented to the spectators and the participants alike, and to us outsiders, too. At various locations along the route tents have been erected where tea is being prepared, but individual people, too, carry trays or boxes with food which they give away freely. Which is equally part of the culture. We are some of the very few foreigners around, and quickly become an attraction in its own right, people want to know where we are from, what we think of the ceremony – they ask whether we know about Hossein, and whether they need to explain it to us. But in a genuinely sharing way, friendly, trying to be helpful. There is never a hint of animosity.

(this story continues here, with text and photos of the mud-rich final day of Ashura)

One Response to 36. Bijar