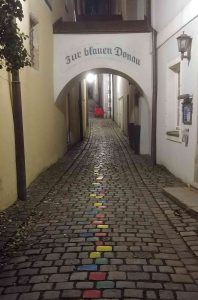 a little alley in Passau, on the Danube River

On the way to Slovakia we stopped in Passau, on the Danube – a river we will encounter more than once this trip. Which started less than ideal.

We had planned to leave early, on Monday morning. It is some eight hours drive to Passau, in Germany, where we planned to overnight. But I didn’t sleep well, the night before, and in the end we left much too late. And the drive took forever, as we needed to stop frequently. No good.

So when we finally arrived in Passau, just before the Austrian border, it was already late in the afternoon. By the time we had checked into our hotel – the adventurously-called Hotel Wilder Man, a beautiful old building which, according to the hotel info, has played host to many of the rich and famous over the centuries -, and were ready to explore, the town was empty, deserted. And it was cold, and overcast. Which doesn’t help when taking photos. No good.

Many of the restaurants are closed on Mondays, and some others had decided to have a rest day, too. Luckily, even though it was a bit early for dinner, we found the Altes Brauhaus, with good beer and solid food. Afterwards we took a stroll through town, still deserted, still cold. Around eight o’clock most coffee bars had already closed. No good. 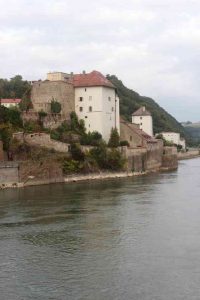 the type of castles guarding the river, to extract toll 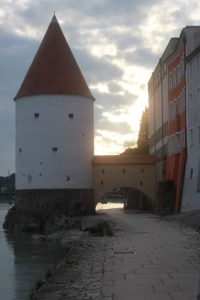 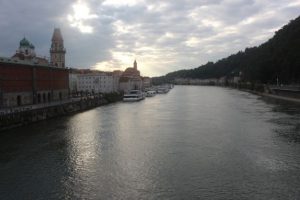 the Danube in Passau

Yet, between the late afternoon and another walk the next morning we did enjoy Passau. The Altstad, the old centre, is located on a peninsula, where the Inn River empties in the Danube. And the smaller Ilz River does the same from the other side, which was the sign for local power brokers in the Middle Ages – we would call them war lords, these days, a bit like the ones in Somalia and Afghanistan now – local power brokers, thus, to build castles on the various river banks, to control trade. Control, in those days, was a euphemism for charging exorbitant amounts of money for no other reason than financial gain of the warlord in question. Except that some of that money was invested in reinforcing the castles, of which we still see the impressive results today. 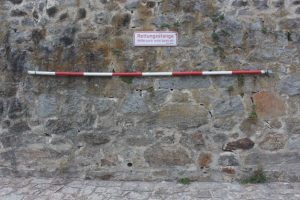 along the water, just in case someone falls in, there are poles to hold on to! 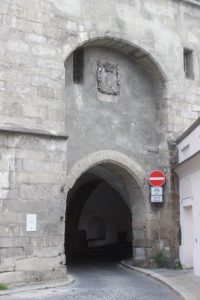 the old town with its arches and gates 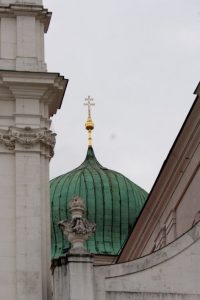 part of the cathedral 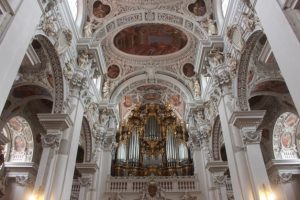 which, inside, looks a lot more impressive

As empty as it was late afternoon, so busy had it become during the morning. Passau is a favourite stopping place for Danube river cruises, and everywhere we saw the results thereof, groups of tourists tagging along with a guide, who would sometimes be dressed up in Middle Age attire to create even more atmosphere – which contrasted somewhat with their microphone mouth pieces, tied to their heads in order to reach the whole group. 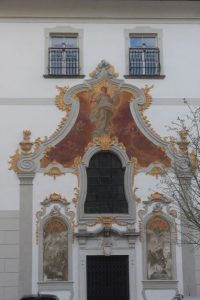 frescos outside one of the buildings 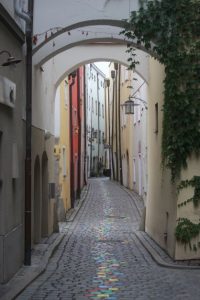 another alley in town, quite picturesque in fact

At the end of the morning we left for Bratislava, another four hours, or so, down the road. Of which about two of those through Austria. For which we had to buy an Autobahn vignette, of course; the shortest one is for ten days. And two hours later we bought another one, this time for Slovakia. For no less than thirty days, more than enough to cover our expected two weeks in the country. We are still a long way away from a united Europe. 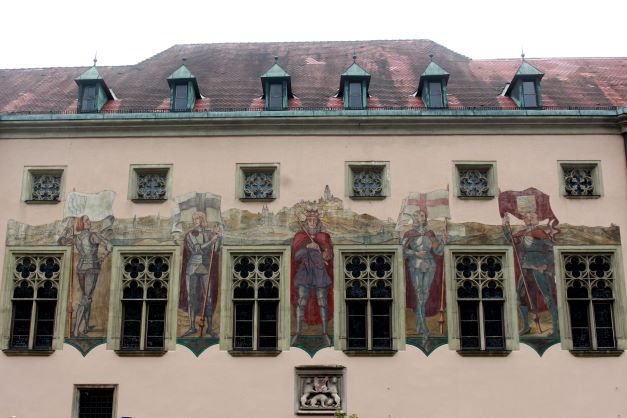 and the frescos on the outside of the town hall, impressive local power brokers, no doubt.

One Response to 03. Passau