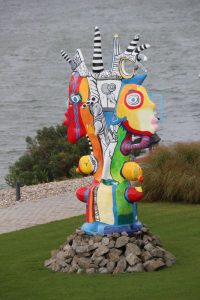 the sculpture Smiling Faces (2004), by Bilio Nic (Belgium), taken from the roof off the Danubiana Museum

What a fabulous modern art museum! After not the smoothest of starts, this trip, the Danubiana is the first thing that blows us away. 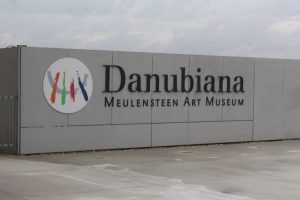 Some 20 km outside Bratislava, on a small peninsula in the Danube, the Danubiana is perhaps one of the most exiting modern art museums of Europe. Established in 2000 by collaboration of Slovak gallery owner Vincent Polakovič and Dutch industrialist and art collector Gerard Meulensteen, the museum has been extended in 2013 to create a unique architectural gem, with inside space for lots of paintings and some installation and sculpture work, and outside not only an extensive sculpture garden, but also a sculpture roof. And all of that in an unbeatable setting of the Danube river landscape – according to the museum staff an essential element of the art experience, or rather, of an art clinic, the interaction between art and nature; the ‘wow!’ element. 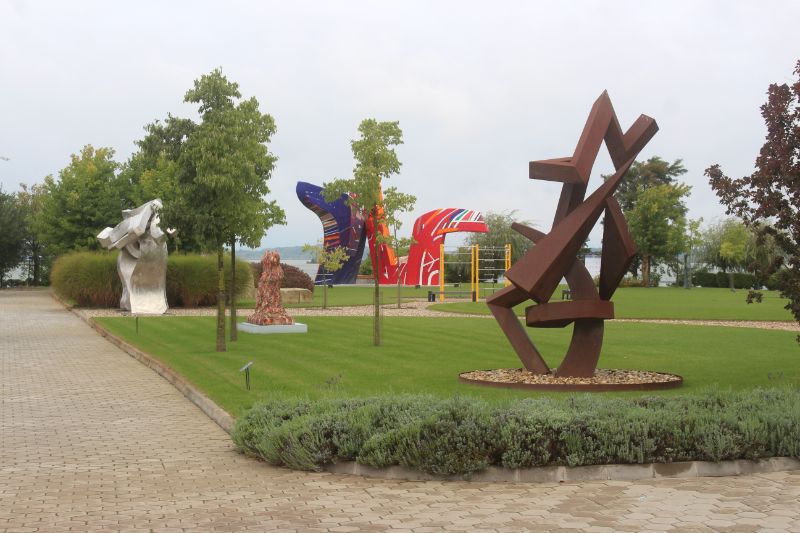 the sculpture garden, or part of it, with the river in the back 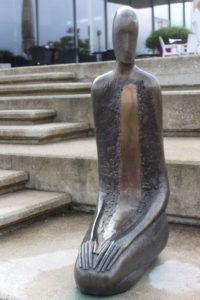 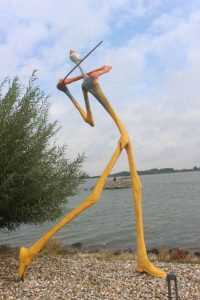 I had to include this one: Golf Player (2007), by Svetozar Ilavsky (Slovakia) 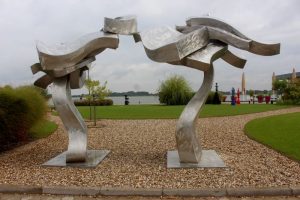 And it is. No matter the building, we were immediately drawn into the sculpture garden, along the river banks, and to the roof, where we enjoyed a fabulous collection of sculptures against the background of the river, mostly with a grey overcast sky, and an occasional ray of sunshine. Which, really, is part of it – and does encourage us to come back some other time, some other season, or some other weather, no doubt creating a different impression.

Only after an hour, or more perhaps, we got inside, where we were immediately overwhelmed by the explosion of colours. Both Meulensteen and the Danubia’s own collection, enhanced by quite a few works donated by artists themselves, have a pendant for colour, which works extremely well in the way the museum has been designed, with open spaces and broadly interconnected rooms. Wherever you look, you have colours coming at you, mostly from paintings of both well established and lesser known (to us at least) artists, and occasionally of installations and sculptures. Obviously local artists are well represented; it is amazing how many great works of so many different Slovaks have made it to the walls, and rightfully so. Of course, art appreciation is subjective, but yes, this is the type of art we both enjoy very much, and in a setting that brings out the best of the combined power of the collections.

I have been to many museums in my life, and many exhibitions, but this one ranks close to the top. 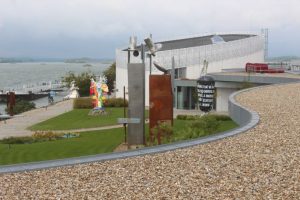 more sculptures, from the roof and on the roof 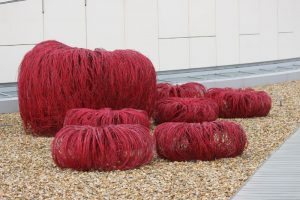 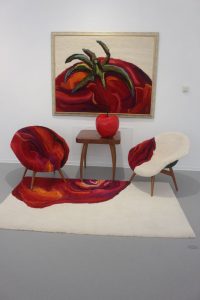 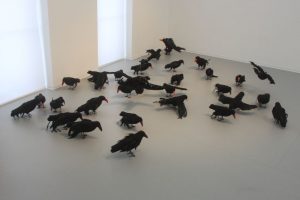 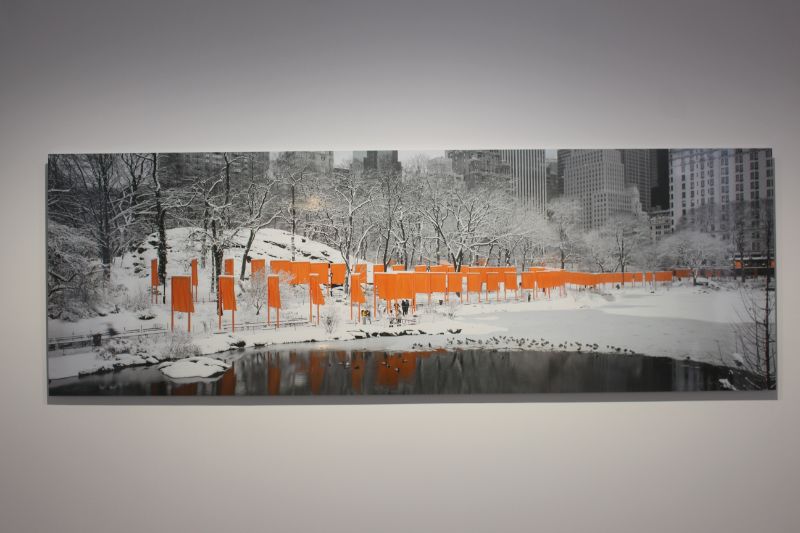 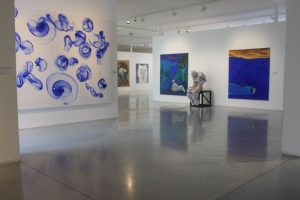 the open connections between rooms, 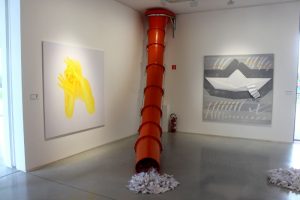 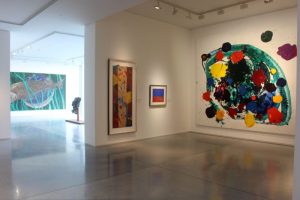 no matter where you look, it is a feast for the eye 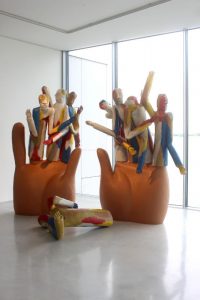 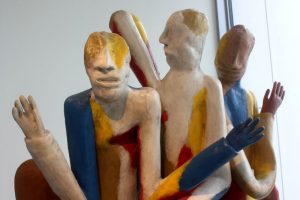 by Jozef Jankovic (Slovakia); and the same work, in detail 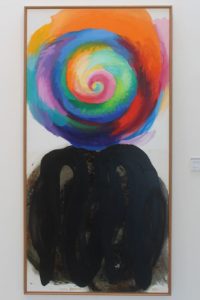 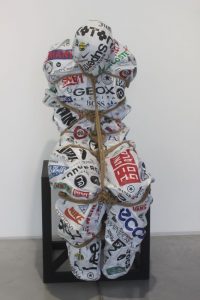 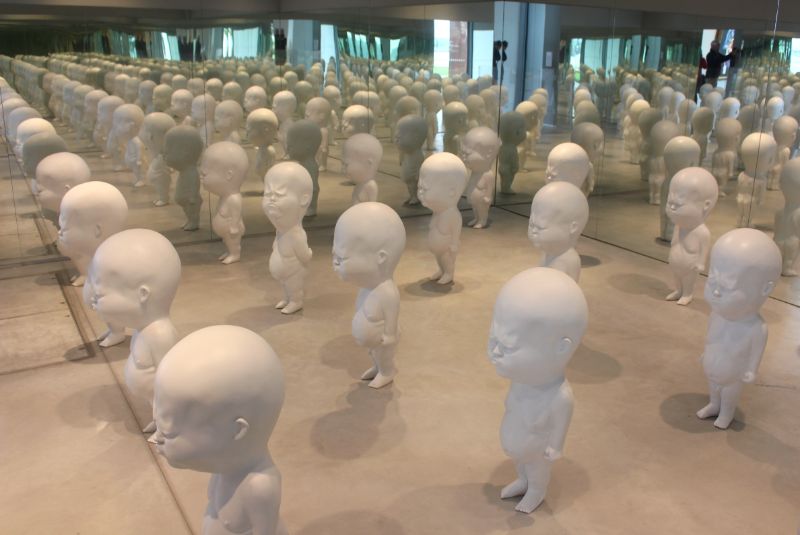 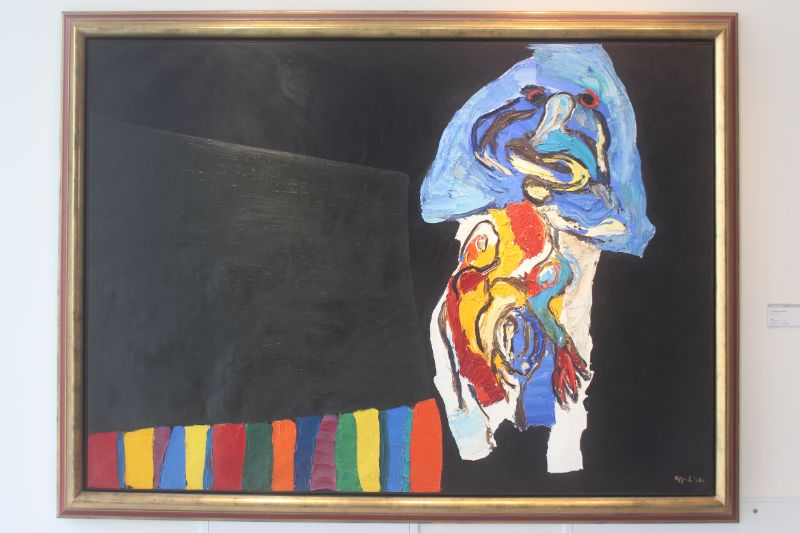