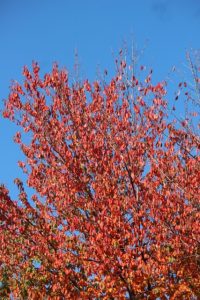 bright red autumn colours in the Zemplen area, on the border between Slovakia and Hungary

Driving into Hungary, we visit two small churches with frescoes, in Abaujvar and Vizsoly. 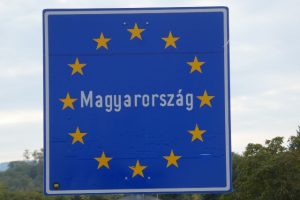 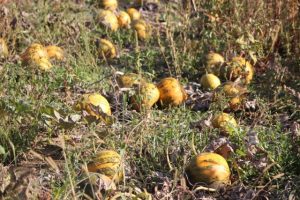 Kosice is quite close to the Hungarian border, but rather than driving straight to Tokaj, we linger in what is known as the Zemplen Hills. Instead of blasting across the border on the motorway, we find a small road that leads to Abaujvar. We end up in a village, with a rather chaotic road pattern, narrow tarmac strips – not much more than that – seemingly endlessly returning onto themselves. Small houses with ample gardens, fenced off but with open gates, and colourful flowers outside, it all looks very peaceful. And yet quite different from just a few kilometres north. 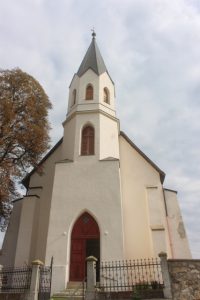 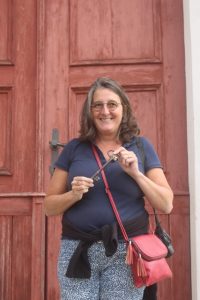 my travel companion has collected the key to the church 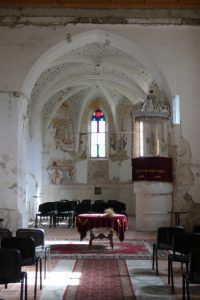 inside the church, some of the frescos have been restored, but most is still whitewash 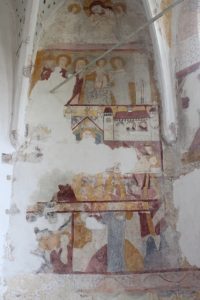 a fresco panel, or what is left to recover 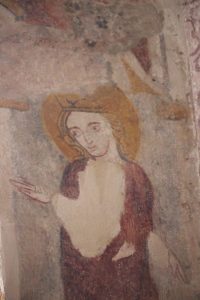 detail of a fresco 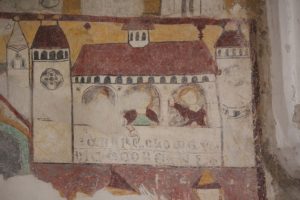 a detail of the main fresco panel

We have come to look at the local Calvinist church. The church itself probably dates from the 13th Century. As Calvinist churches go, there is little decoration, but of course, Calvin post-dates the establishment of the church. So when the village turned Protestant in the 1550s, the precious frescoes inside the church were white-washed, only to be rediscovered late 20th Century. Efforts are underway to restore the frescoes, of which some evidence is already visible. To be honest, they are not great works of art, but what’s impressive is that they are so old, apparently from around 1332. Of course, the church was closed when we arrived, but – other than in Slovakia – somebody living nearby just handed over the key to my travel companion, and we could explore the church by ourselves, at our leisure. 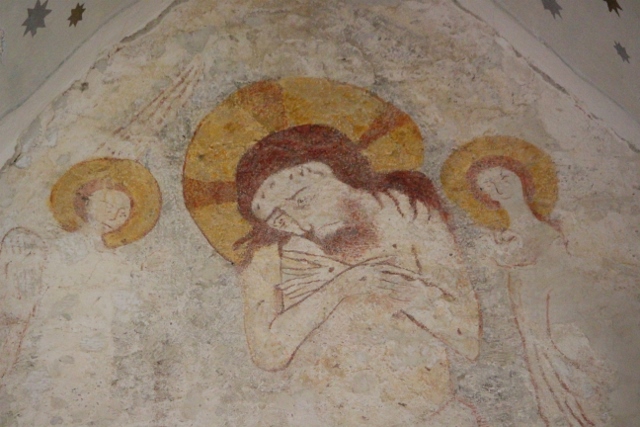 and another one, familiar subject matter 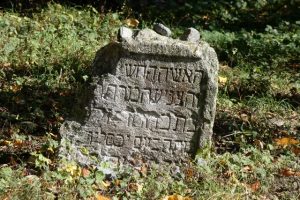 near Fuzer we stumbled on a Jewish cemetery 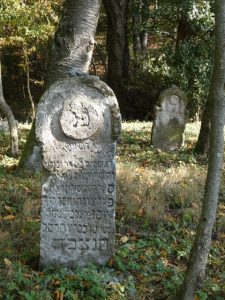 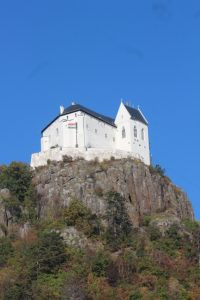 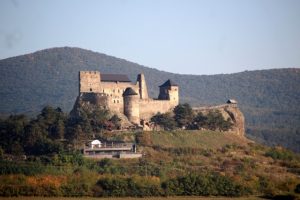 the castle at Boldogkovaralja looks a lot more authentic

Continuing our exploration of the Zemplen Hills yielded the occasional castle on top of a hill, like the much restored one near Fuzer and a more authentic looking one at Boldogkovaralja, and more small, humble villages and the hills themselves, sometimes given over to agriculture, other times densely forested. Pleasing to the eye, without being fabulously impressive. 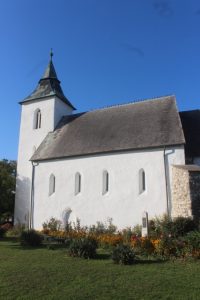 the church at Vizsoly 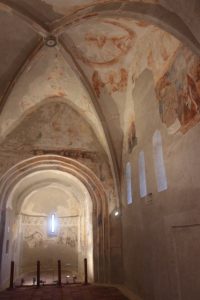 inside the Vizsoly church, once again rescued frescoes 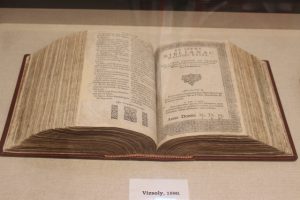 the famous Vizsoly bible, the first translation in Hungarian, printed next door in 1590

The second church of the day is in Visoly. Same story, of a 13th Century church with rich frescoes, 16th Century white-washed, and now being re-discovered, and restored. We are generally quick to point at the Turks, who whitewashed the Hagia Sophia in Istanbul, but our Protestant converts did exactly the same. The frescoes are more extensive than the ones uncovered in Abaujvar, and although they appear artistically better, they are equally, or even more, vague.

And then, by the end of the afternoon, we drive into Tokaj. Tokaj? Isn’t that name somehow familiar? 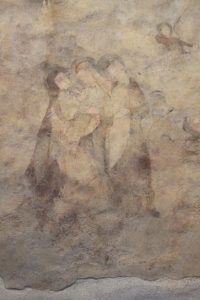 most frescoes rescued have lost their vibrant colours 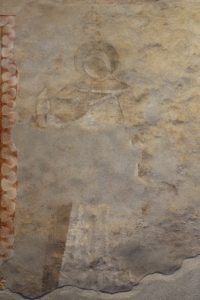 another faint fresco, of a person reading 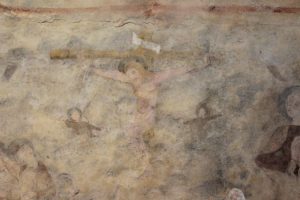 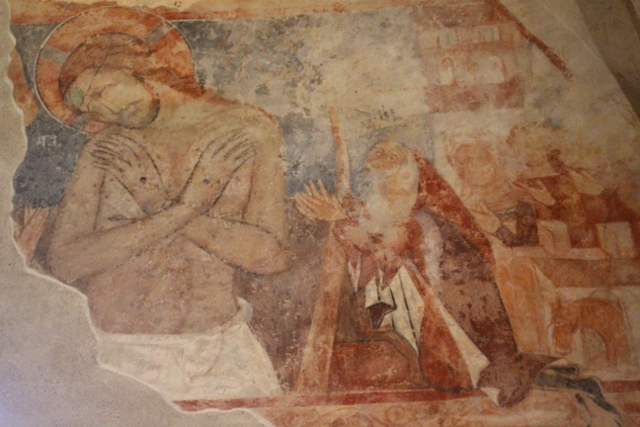 this one is more colourful 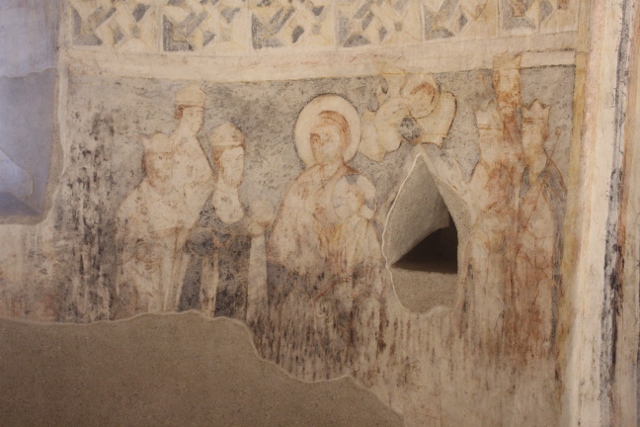 another panel, quite detailed 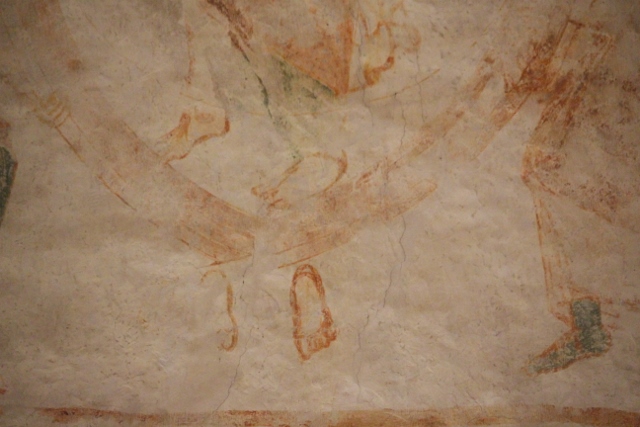 and the most famous one in the church, Christ’s ascension, leaving his footprints behind