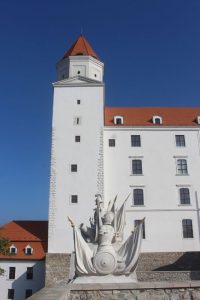 the Bratislava Castle towering high above the city

We are a bit lost in Bratislava, which fails to really impress. But look deeper, and there are plenty of things that we do enjoy, from hidden places and original art to the architecture, and the friendly people.

Many European capitals do have something unique. Be it a building, or the atmosphere, but you do have the distinct feeling of being in London, or Amsterdam, or Paris, or Prague. Bratislava? Hmm, perhaps the UFO observation desk I referred to earlier, but for the rest there is little that gets us enthusiastic. Perhaps it was the weather, which didn’t want to clear – on the contrary, on our last afternoon is was pouring down. Or perhaps it is just that there isn’t anything specifically defining in Bratislava.

Of course, the Danube – the Donau – runs through town, but there is little in terms of an attractive boulevard. Along both banks hospitality ships are moored, some obviously bars or restaurants, others just flat decks that, perhaps, can be rented to put a tent up. But all were closed, there was no life whatsoever along the river. 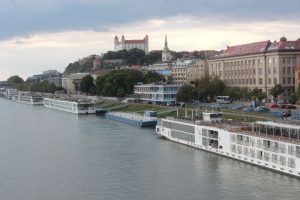 along the Danube, lots of party ships, but little partying 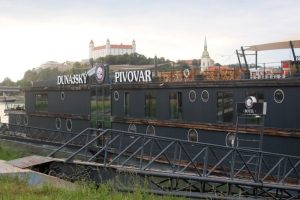 another party boat, with Saint Martin’s Cathedral and the Castle in the background – pivo is beer, did I tell you already? 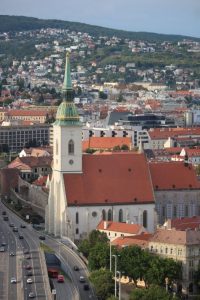 the sterile Saint Martin’s, just about surviving next to the motorway into town 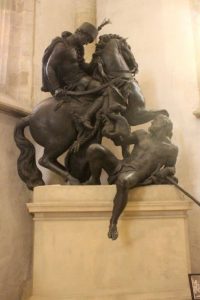 the only work of art inside Saint Martin’s cathedral, the saint himslef sharing his cloak with a beggar 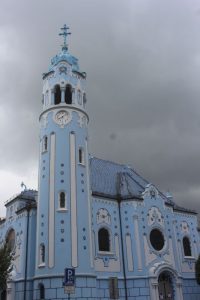 the Blue Church of Saint Elizabeth 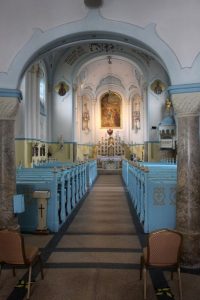 closed, we managed a peep inside – also blue

The old town, the Stare Mesto, has been patched up quite a bit, and several buildings, old palaces, look quite nice. But perhaps a little overdone. The big monuments? well, Saint Michael’s Gate was in scaffolding – so there is still hope; or not, because the city walls have already been patched up, to the extent that there was little recognizable Medieval left. The Saint Martin’s Cathedral, where emperors have been crowned for hundreds of years, has been restored, and looks rather sterile. The Blue Church of Saint Elizabeth?; temporarily closed until further notice. The Presidential residence, a grand 18th Century Summer Palace, yes, that looks brilliant, no expense spared. But look a little further, and equally many buildings are falling apart – or have not yet been refurbished, who knows? Most of the Slovak people we talked to were adamant that conservation only works by private contributions, there is no government effort to speak of these days. And graffiti, the ugly kind, disfigures the town further. 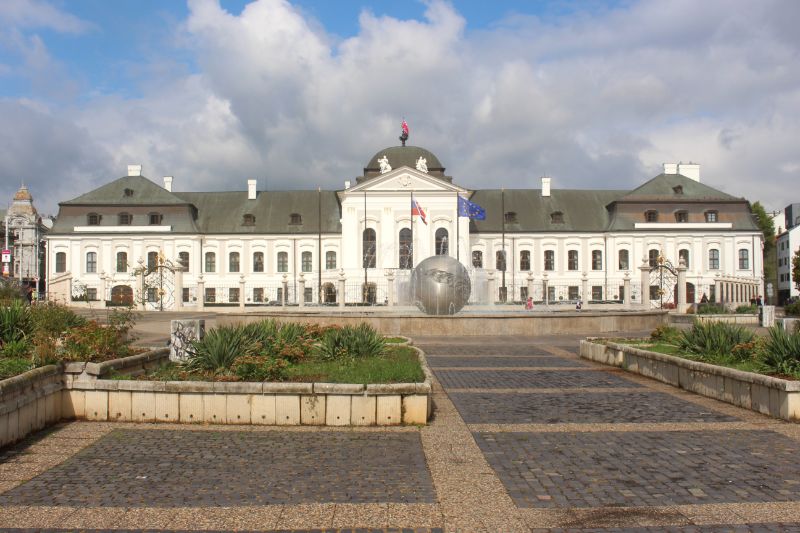 the presidental palace, all spendor, of course 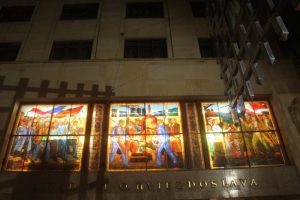 and in town, we found some stained glass windows 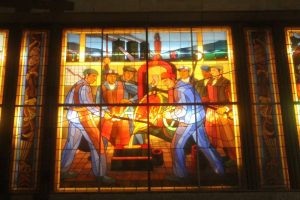 from an obviously communist past; one of them in detail, glory to the workers! 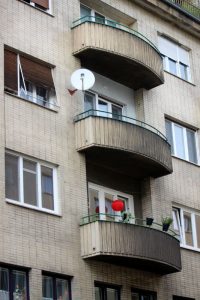 and this is just an apartment building in town 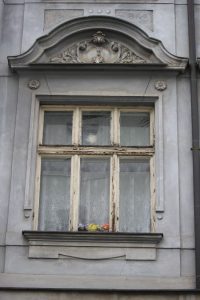 not all city elements are equally well maintained 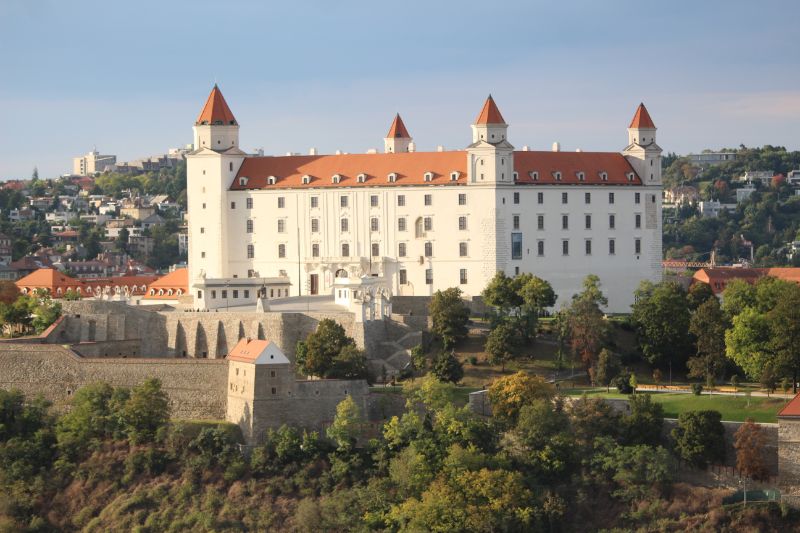 the Brtaislava Hrad, or castle, a huge sterile white box 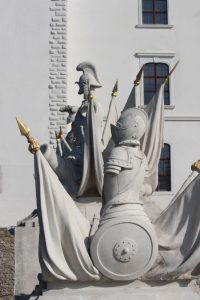 and the sculptures have been restored, in concrete! 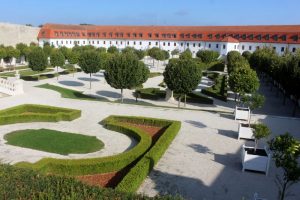 Obviously, during communist times this was different. The Bratislava Hrad, the castle high on a hill overlooking the old town, was patched up in the 1960s. And was turned into a sterile white, monstrous box, with sterile, isolated arches, sterile, concrete sculptures, and sterile grounds surrounding it. It is a museum, now, that’s all that can be said about it. 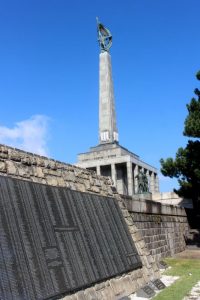 the Slavin monument, with some tomb stones, and a much bigger black marble plates, with names and dates 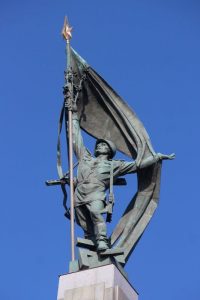 but the monument itself, very militaristic indeed, complete with Soviet star and Kalasnikov 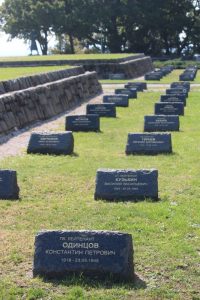 some of the fallen have their own place, with sober black tomb stones 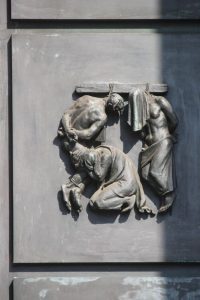 and the metal door of the monument has these strange, harrowing decorations…

On another hill, visible from all over town, is the Slavin monument, another creation from Communist times, honouring the Russian soldiers that died in the liberation of Bratislava in 1945. I always find these places impressive, even though this one has so clearly a militaristic connotation. But beautiful, no. 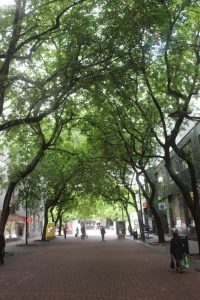 a leafy square, they do exist in town 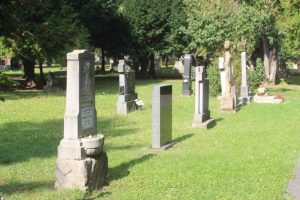 the cemetery, more a park, really 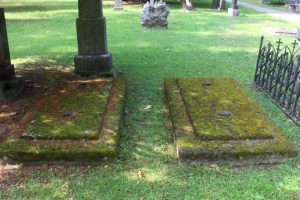 And yet, wandering through Bratislava, even in the rain, does have its charms. There is obviously a whole tourist infrastructure, with tours, terraces, touts. But there are hardly any tourists. And the touts are not insisting. And there are little, humble treasures, too. The occasional, hidden leafy square, or an old fashioned – or call it traditional – restaurant with wood panelling and crystal chandeliers. The old cemetery – I am a sucker for cemeteries! – Ondrejsky cintorin, established in 1784, yet not very crowded, with its mostly Hungarian and German graves, many well over a hundred years old. The headstones are so weathered that you often cannot read the names, let alone the dates, anymore. And I mentioned earlier the modern architecture, even though its style is a bit dated, like in the Slovak Radio Building, a rusty inverted pyramid. And what about the art everywhere in town, sculptures on many corners, and even improvised installations of a more temporary character. 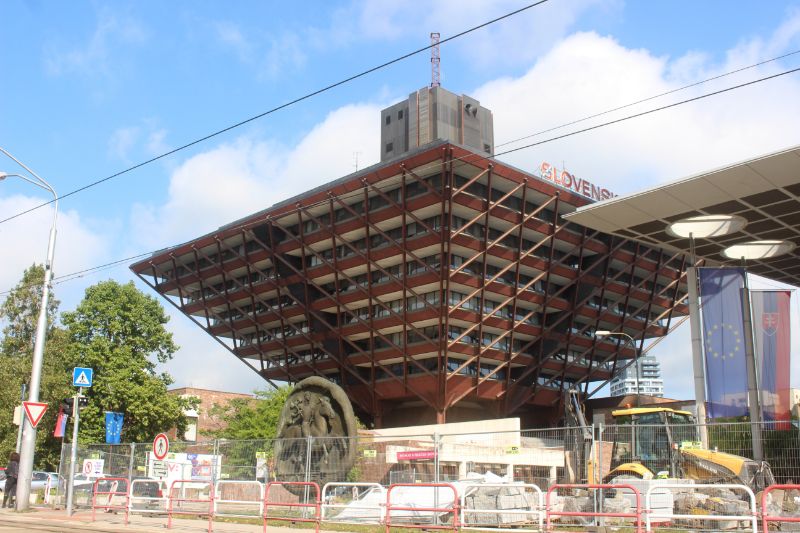 the inverted pyramide of the Slovak Radio Building 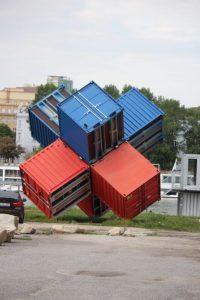 modern art, along the Danube 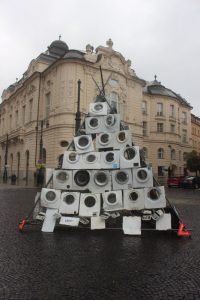 a spontanuous expression of art, based on wahsing machines, in the city centre 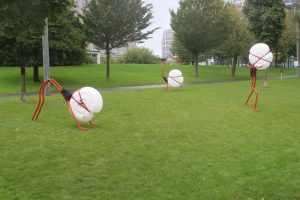 Or would it just be the people, unassuming, unpretentious?  Most of them fluent in English, always friendly, polite, helpful? Dare I say, so much nicer than the locals in London, Amsterdam, Paris or Prague. You know, a not so very special city does have its advantages.

Oh, and just outside Bratislava, there is the Danubiana! A reason in itself to come to Bratislava.