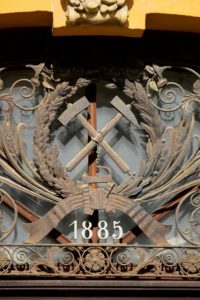 mining is everywhere in Banska Stiavnica, as in this symbol on the townhall

The UNESCO listed town of Banska Stiavnica is beautifully restored an booming from tourism, yet, the memory of mining – the source of its ertswhile wealth – is still everywhere.

Banska Stiavnica’s history is classical one of boom and bust. Located in the caldera of a huge volcano, the surroundings of the town were recognised early as rich in minerals, especially gold and silver. There are some traces of Neolithic settlements, and of 3rd Century Celts, but the earliest ‘modern’ town with fortifications really only developed in the 10th and 11th Century. The first boom, however, occurred when the Slovaks were joined by skilled German miners in the 13th Century, who began the exploitation of gold and silver in earnest. To the extent that during the Middle Ages Banska Stiavnica was the main producer of the stuff for the entire Hungarian Kingdom. In the 18th Century, it was even the third largest town in Hungary. 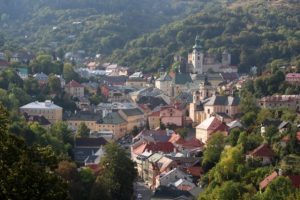 view of town, from our guesthouse up the hill 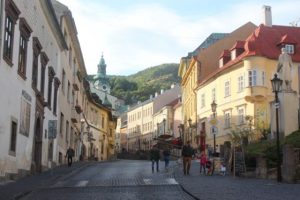 and the main street, from right inside town 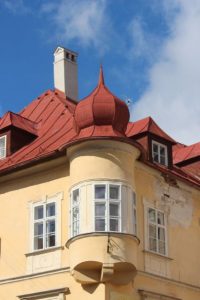 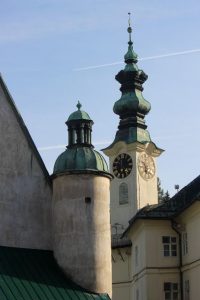 multiple church towers in the centre

And than bust set in, with the decline of the mining output. Gold and silver had already been joined by lesser-value zinc and copper, in ever deeper mining levels, and by the second half of the 19th Century Banska Stiavnica began to lose its importance. And not only mining declined, the city itself, too, buildings falling in disrepair. The last mine closed in the early 1990s, but that was more an administrative affair, mining itself had died long before. the town hall, a large and stately building, from important times back then 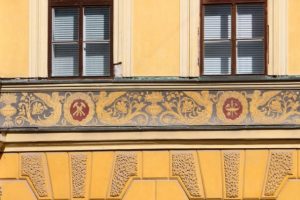 decoration on the town hall, also represents the mining symbol 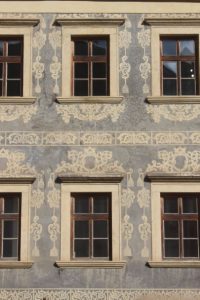 a sgrafittoed house – the only one – on the town square 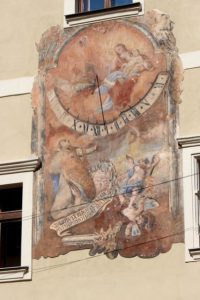 a sun dial, along the main street

Until UNESCO decided to include it on its list of World Heritage sites. Suddenly money became available, and restoration of the magnificent Middle Age buildings – churches, the town hall, the various castles built to defend the town against the Ottomans – could be financed. Boom again, not in the least because of the tourist interest, both local and international. Although the old miners have not taken the tourist-related jobs, there is a new generation in town, that has introduced swanky cafes and bars, hiking trails in the surroundings – for which guides are needed, of course. And, last but not least, there is the more recnet refurbishment of the Stiavnica Kalvaria, an 18th Century Jesuit initiative. 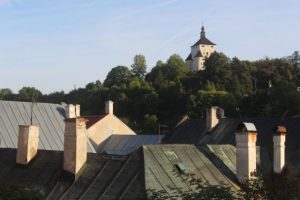 the new castle, in the distance 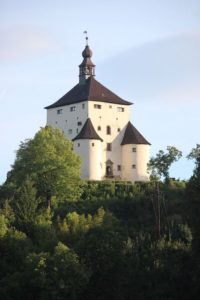 and in close up 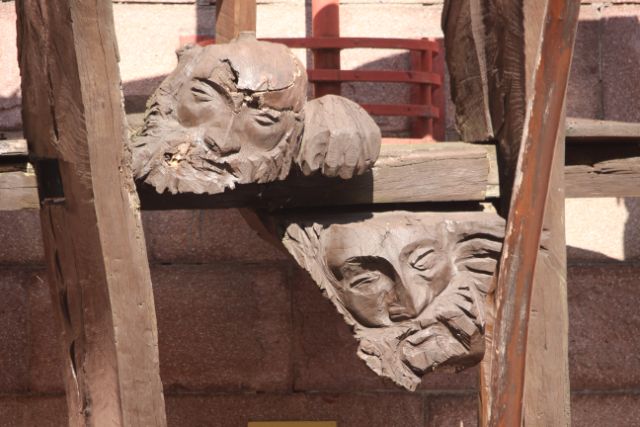 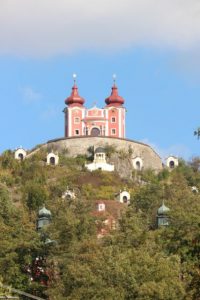 the Calvery, lots of little chapels and the main church, on top of the hill 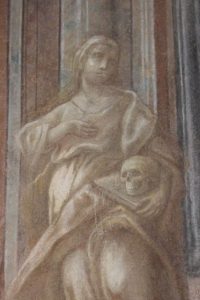 one of the frescoes, restored, in a chapel; bizarre handbag 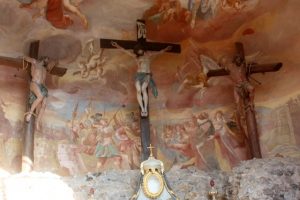 and the cricefixion, in the church up the hill

Kalvaria? Calvary, in English – I admit I had to look it up, as well – is an open-air representation of the crucifixion of Jesus. And the one in Stianvica, a Baroque version with three churches and 22 chapels, is possibly one of the most important in Europe. But here, too, boom and bust alternated, boom starting with its inaugural blessing in 1751. Bust came at the end of WW II, with extensive damage by Soviet troops which were pushing de Nazis out of Banska Stiavnica. But perhaps even more bust was caused by vandals and art thieves, in the 15 years or so after the fall of communism in Slovakia. To the extent that decoration and furnishings had to be removed to protect them. Until in 2008 serious restoration began, with outside funding. Boom restored, and now the complex is visited by more than 70,000 people a year – who all contribute to the tourist industry in Banska Stianvnica, as well. Good for them!

Never mind that I, myself, found the whole Kalvaria thing a little tacky; not all the frescos have been equally artfully restored, some of the stuccos are all too obviously not original anymore. But if it makes people happy? As I said, good for them! At least from a distance it looks impressive.

Oh, and the main thing for me in Banska Stiavnica was, of course, the mining. 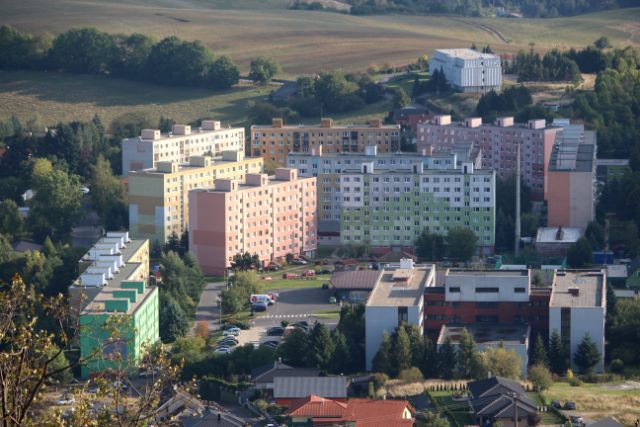 of course, not all on Banska Stiavnica is nice and old, there are also the obligatory palatis, monoblocks from communist times.

One Response to 09. Banska Stiavnica