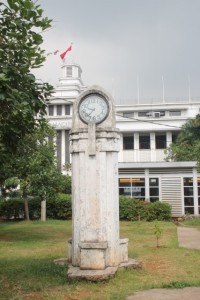 Dutch clock near Kota station, close to the heart of the old Batavia

The Kota neighbourhood of Jakarta was were the centre of the old Batavia was, and it shows. Even the harbour of Sunda Kelapa fits in the image of the colonial past. 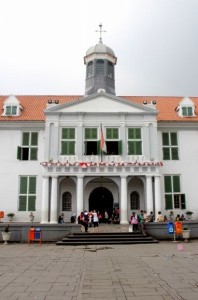 Batavia doesn’t exist anymore, of course. The former Dutch colonial capital became Jakarta at Indonesian Independence. But in the Kota neighbourhood the old Batavia is still visible, albeit in the form of mostly dilapidated buildings. Some are no more than a roofless shell, others are about to reach that state, but obviously there has been some restoration going on. The museum-turned old town hall, dating from 1627, stands splendidly at one side of the old cobblestone square. At another, housed in a well-maintained old colonial house, is the wajang museum, showing a wide variety of puppets used in the traditional Indonesian shadow puppet play. 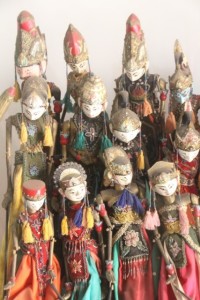 puppets in the Wajang Museum 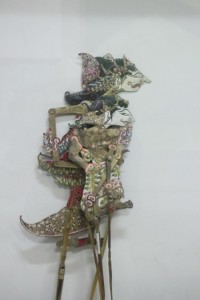 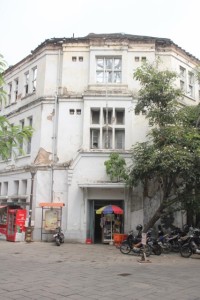 another colonial building at the cobblestone square in Kota, old Batavia

Other buildings, in various stages of need for repair, nevertheless help to imagine how it must have been, so many hundreds of years ago, and the creation of a pedestrian zone for once keeps the cars and busses away. Saturday afternoon is busy, mostly with young people, artists selling their handicraft, entrepreneurs renting out fancy-coloured bicycles – how Dutch can you get? – and there is a really nice atmosphere. Perhaps this should be made the centre of Jakarta again! 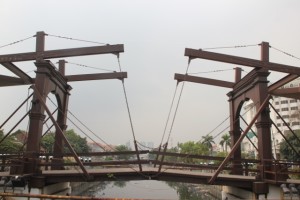 the only Dutch draw bridge left in Jakarta, the Chicken market Bridge in Kota 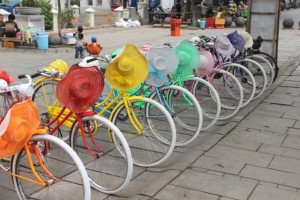 jolly-coloured bicycle rental, complete with coloured hat or helmet: you cannot get more Dutch, neither colonial! 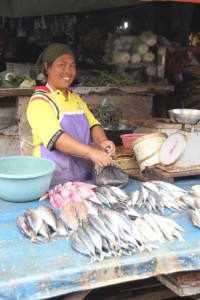 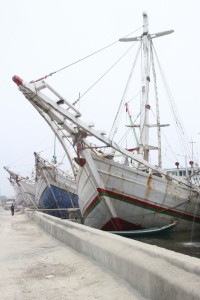 the tall ships, Makassar schooners, although without sail these days, in the Sunda Kelapa harbour 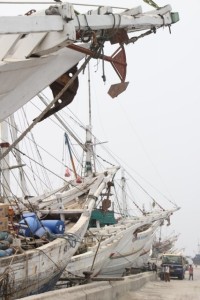 more ships, stacked along the quay of the harbour 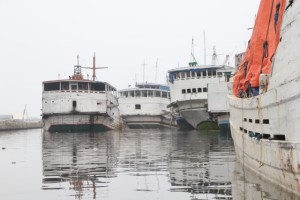 at the back, there are many a ship waiting for space at the quay; business is obviously booming 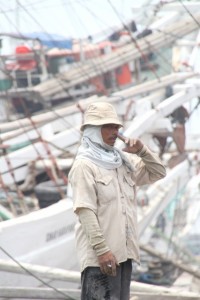 A little further on is the fish market, in a low key neighbourhood with narrow alleys, and the original harbor of Batavia, Sunda Kelapa. Along the quay a string of wooden ships are moored, not alongside but with the bow to the quay, as to fit as many as possible. And still, there is not enough space: when we take a boat ride with an old gentleman in a canoe, there turn out to be many more ships behind the ones moored. Loading is going on not stop, trucks driving on and off, cranes moving pellets, and harbor workers carrying boxes onboard, balancing on the narrow planks. Only the sails are lacking, these boats are powered by engines, but one can imagine Batavia harbour as is was.

We’re back in business. Where Jakarta was somewhat disappointing in general, this area is the place to be, full of character, full of life, and slightly less full of cars.

next: we’re off to Bogor neatly stacked cement bags ready te be taken on board