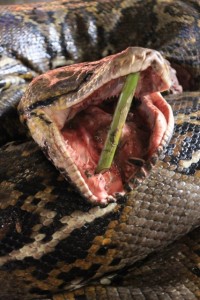 A market with a difference; not everybody may enjoy the content or the pictures, but do not judge by your own norms and values alone.

North Sulawesi is home to the Minahasans, an ethnic group of seven clans that dominate this peninsula. It is a relatively affluent and predominantly Christian area, perhaps due to its close relationship with the Dutch colonial powers in the past – the area was sometimes called the 12th province of The Netherlands (in the days The Netherlands had only 11 provinces). But Christianity, Catholics as well as several Protestant communities, seems to be overdoing things a little. What Pulau Madura had with mosques – every 500 meters one – North Sulawesi has with churches. At one stage I counted eleven in the timespan of five minutes, perhaps three to four kilometers driving, the one even more monstrous than the other.

Tomohon, kind of self-appointed cultural capital of Minahasa, would be like any other Indonesian small town in Indonesia. Granted, it has its share of churches, but for the rest the town has its network of streets, neat houses with gardens full of flowers, and not a lot of rubbish around. The usual shops, a bus terminal, a market. Nothing special. 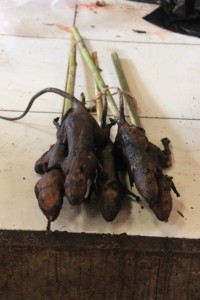 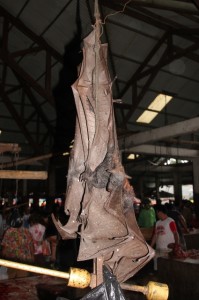 full-size bats in the Tomohon market 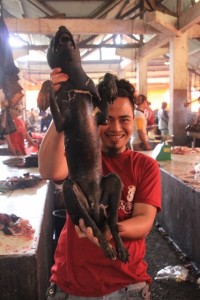 dog seller – in Minahasa culture there is nothing wrong with this 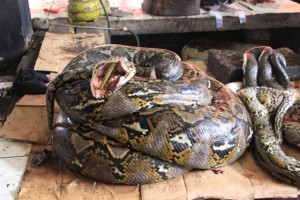 a sizable one, for sure

Except that the market is the prime gathering spot of the Minahasa clans, and where they do their shopping. Still nothing special, you would say, but Minahasans tend to have a specific taste when it comes to food. The market has a special section, referred to by one of the local people we asked as the extreme food section, and indeed, I have never seen bats and rats sold in such quantities. The highlight, however, undoubtedly was a huge snake, easily 4-5 meters long, which when it was ultimately bought by someone, had to be carried off by three people. The part rather more difficult to swallow, figuratively speaking as well as literally, is the dogs section, where dogs of all breeds, but mostly skinny ones found in the street, torched black to take away any fur, can be, and are being purchased to eat. You can even select one, from the cages outside, a truly sad-looking affair. Different culture, I suppose, and distinctly different from ours. Yet, people here keep dogs as pets, too, and the other side of the market is full of well-fed dogs roaming around to get even better fed, no signs of any threat of being killed. I wonder what determines the future of a Minahasan dog, or whether ultimately each dog’s future is the same. The people we asked about it remained somewhat vague. 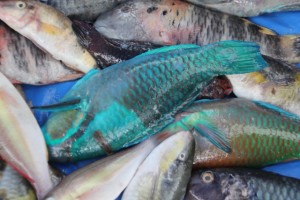 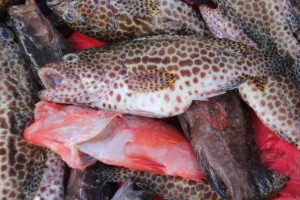 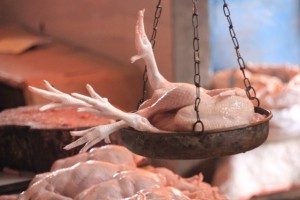 there is also other food for sale, chicken for instance

We had intended to walk up one of the volcanoes near Tohomon, too, to get acquainted again with bubbling mud and sulphur smells – although some of our cloths still have the smell from Papandayan and from Ijen. But when we left the market, it started raining again, buckets, so we took the bus back to Manado, for an iced cappuccino in the mall, instead.

next: the beach and the National Park at Batiputih 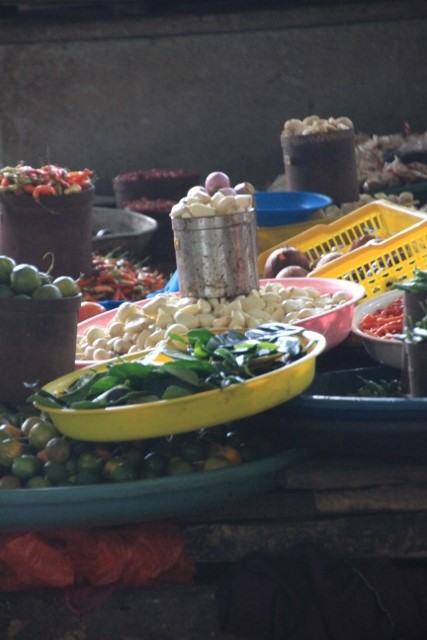