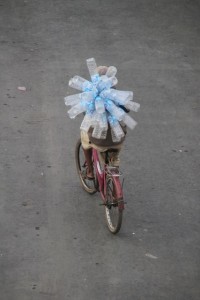 a cyclist clearing the harbour area of plastic bottles

An uneventful, long and slow ferry crossing from Java to Sulawesi, the closest we may come to a cruise.

It was time to move on, after four weeks on Java (and a day on Pulau Madura). Sulawesi was the next island destination. One can, of course, take a plane, but part of exploring Indonesia, with its 1000s of islands, is exploring other forms of its inter-island transport system: the ferry, which is largely in the hands of the national shipping company, Pelni. Pelni owns some 40 ships, that have sort of standard fortnightly or monthly routes, connecting ports of many islands.

There are many different experiences with Pelni ships described in various blogs and other internet and hard-copy sources – funny, scary, horrible, frightening, you name it -, largely depending on the individual ship, and on the class of travel. We didn’t have a choice of ships, but we could control the class of travel. Although no doubt economy class is the more adventurous, packed with hundreds of people in huge, hot and stuffy dormitories, or even better, moving your assigned matrass – if you are lucky enough to have an assigned matrass – outside on one of the decks to get some fresh air, together with everybody else, we opted for first class, instead. Our own air-conditioned cabin, private bath room, and a table in the elite dining room, with superior food. 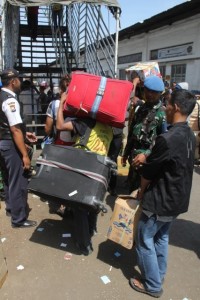 our stuff being carried on board 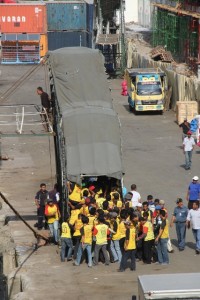 porters vying for position to board at a just arriving ferry 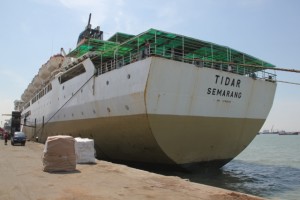 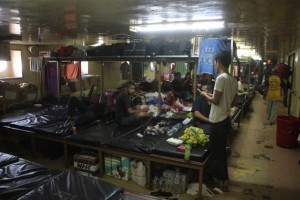 the economy class dormitory, or one of them

Our boat, the Tidar, a bit of a rust bucket, was scheduled to leave at 2 pm from Surabaya, and reach Makassar some 24 hours later. So we turned up at the harbor an hour early, to quietly check in, and settle in our cabin. We were berthed at deck level six, for first and second class. All the doors to the outside areas were locked, to keep the overflow of economy passengers out, I suppose; only through some convolute ways down and up several stairs, through long corridors, and economy class dormitories, did we managed to get outside again. Where we watched the loading of the last freight into the front bay. We thought. Six hours later, the loading of the last freight was completed, including the front deck having been stuffed with onions. We left at seven, five hours later than scheduled departure. In the meantime, we had seen two other Pelni ferries arrive, and leave again! 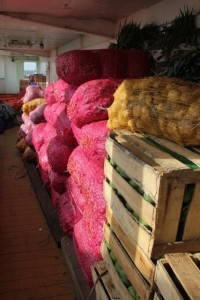 the front deck packed with onions and other vegetables 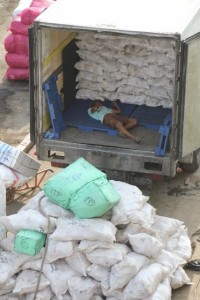 The next 24 hours were possibly the nearest we will ever get to a cruise. Food was served regularly, at our special table in the dining room – there were four other first class passengers, and a splatter of second class passengers, with whom we shared the huge diner. Entertainment was provided, in the form, first, of what I think was one of the crew members, in a neat white uniform – we dubbed him the singing sailor. He was not very good, but managed some English language songs. Next was a woman singer, in a glitter outfit, no doubt the reason that the dining room cum theatre had by now filled up with Indonesian male youths for the occasion (for different reasons, both Sofia and I didn’t fit the standard audience profile). We left early. Apparently, we missed the dancing. 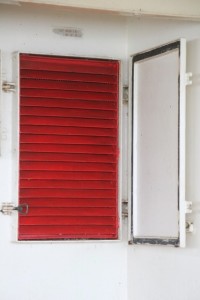 a window on the ship

The next day – the whole of the long next day – we spent on board. Our cabin was, shall we say, somewhat Spartan, and not very clean, although no doubt far superior to a matrass on deck (except, perhaps, for the breeze on deck, which was far superior to our aircon). So we alternated between a stroll outside on the decks in between the matrasses of other passengers, whenever we managed to find an open door, and the dining room cum theatre, where more entertainment was put on, this time including a singing soldier – really! -, and food was served at irregular intervals, announced by the ship’s intercom in Bahasa Indonesia, but largely un-understood by us, which meant that getting food was somewhat of a chance encounter.

What can I say? Thanks to our own choice of class, there was not a lot of adventure involved, and the Pelni experience so became a rather mild, not uncomfortable, but endlessly long experience. Not very exciting. 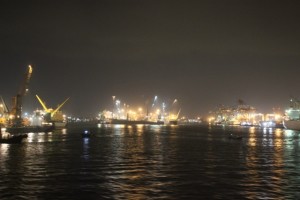 Next time, we’ll take a plane. We have never been that keen on cruises, anyhow.

2 Responses to 29. the crossing