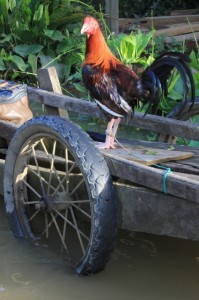 On our final stretch on the Mahakam, from Tering to Long Bagum, life along the river and in the villages unfolds.

The advantage of having rented a car to see the Dayak villages around Melak also means that we can cut off a long bend in the Mahakam River, and get to Tering by road in a little over an hour, instead of five hours. 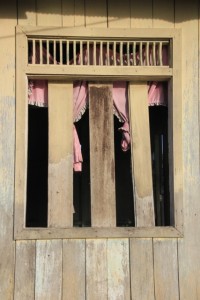 Tering is actually a collection of three settlements, a mostly Muslim one on the south bank, a Christian one on the other bank, and a third one we have never been able to localize, somewhere up or down river. Arriving in the Muslim part, we found ourselves the usual losmen, back to the basics after the relative comfort of the hotel in Melak. To reach, we had to change to flip-flop mode again, slippers, as large parts of the village were flooded. Not so much the houses, they were high enough, on their usual stilts, but roads and gardens were inundated. Great for the kids, of course. 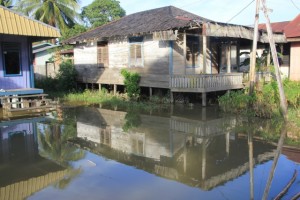 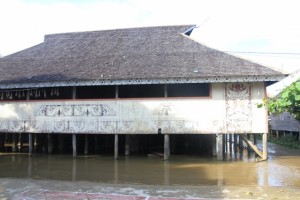 the meeting hall in Tering Lama, still above the water 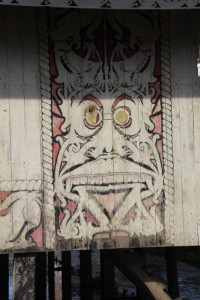 decoration of the meeting house 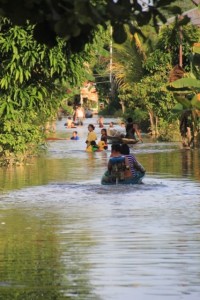 a street in Tering Lama under water, calling for canoe use

Tering Lama, the Christian part, was even deeper under water, on our little visit we frequently waded up to our knees through the water – anything deeper, and we would turn around. There is a nice meeting hall, here, second best thing to a longhouse in a Dayak village. Despite the floods the village looks neater than the other side: almost all wooden houses, flowering plants of which at least part is still visible. But as so many of the villages we have seen here, after a while you have seen it all. We made our way back across the river in a very small canoe, which only just stayed upright.

Later in the evening a group of five men, all dressed in black, checked into the hotel; no “good evenings”, no communication at all, not even eye contact. Weird, and a little unsettling. They went out again, only to return in the middle of the night. Had we missed the flesh pots of Tering? Or was this some sort of gang on a mission? I don’t know, for the same token they were members of a chamber orchestra who had been performing, but it did feel rather uncomfortable. 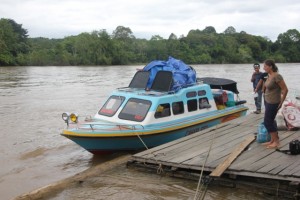 our speedboat (to the right, the only other bule on the river) 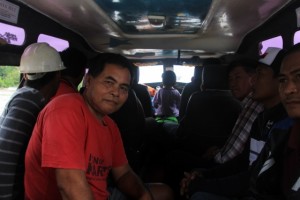 To our relief, the next morning we found out that we not been murdered in our sleep. So back to the dock, further upriver. Our ultimate target on the Mahakam was Long Bagum, at well over half of the length of the river from Samarinda. We had reckoned on hiring another ces, to take us first to Long Iram, and then slowly further up, visiting villages on the way. But with the observation that all villages are, in the end, very similar, and that the river scenery is changing rather slowly, we jumped at the opportunity to join a speedboat, which was just preparing to leave from Long Bagum directly. 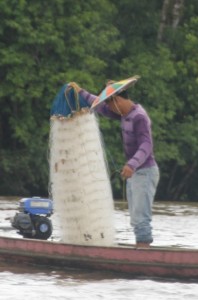 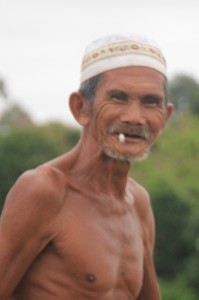 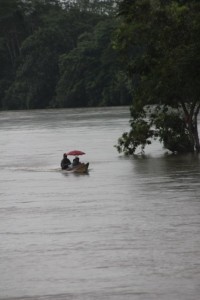 canoe on the river 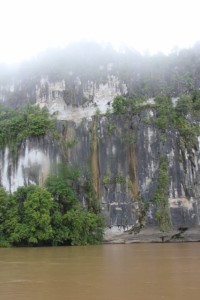 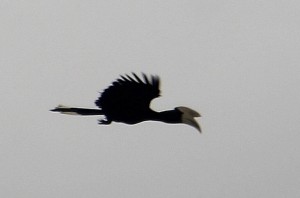 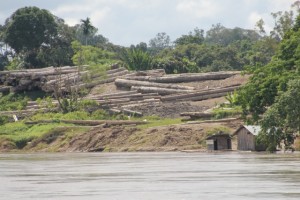 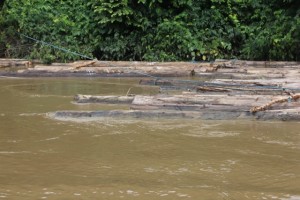 logs being transported by raft 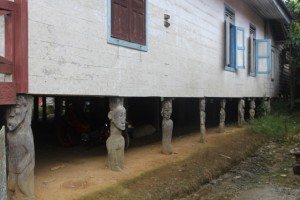 a house in Datan Bilang, on poles 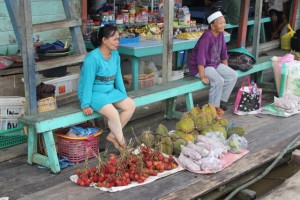 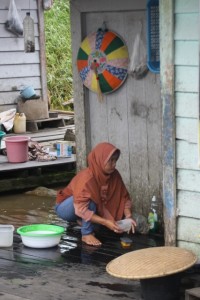 woman and her hat 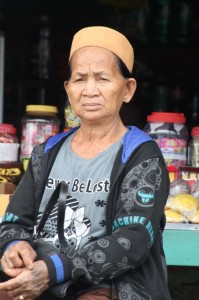 The river narrows considerably on this stretch, and becomes more attractive, with more hills and even some real rocky outcrops. The occasional bird, a hornbill at the top of a tree, but for the rest little animal life, and neither a lot of human activity on the river. Few boats, certainly no big barges anymore, but lots of evidence of logging, scores of chopped trees on the shore and tied together as rafts in the water, for transport. But entertainment is provided by the villages we encounter along the banks, at many of which we make a stop to drop people, or take on more. Mostly take on more, actually, and the small speedboat does fill up. 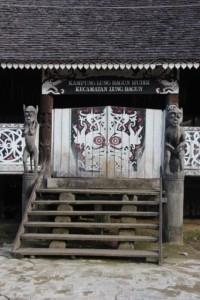 the entrance to the meeting hall in Long Bagum

Long Bagum is another one of those charming villages – which are nice for a while, but really very small, and not capable of keeping my attention for too long. The next stretch upriver, to Long Apani, would take another 8-10 hours in a speedboat, and the tiny sum of 1 million Rupiahs per person, about US$100, one way. And I also found that there is, after all, a limit to what my wife is prepared to put up with. Fair enough. So having reached this far, it was time to start heading back. Because of the high water levels, the regular ferry, the kapal biasa that we took on our first river day, reaches all the way to Long Bagum, and would leave the next morning at 7 am, a few minutes’ walk from our guesthouse – everything is a few minutes’ walk, in Long Bagum. To make sure we wouldn’t miss it, we left at 6.30, to find that the boat wasn’t there anymore! It had left more than half an hour early: unprecedented. Rather than stick around for another day, we chartered a ces, to try to catch up with the ferry. Which we managed, two minutes later, the ferry being tied to a jetty on the other bank to take on more passengers. Lucky we!

Silly we! Inexperienced amateurs, even after more than two months travel in Indonesia! The ferry, just like any public bus, spent the next 45 minutes cruising from one jetty to another, picking up people and freight wherever she found it – quite impressive, in such a small village. The concept that everybody comes to one place is totally alien, people expect to be picked up and dropped off at their front door. We could have just waited a little longer, and waved, and the boat would have come back for us.

Anyhow, we were back on the river, for a 24 hour long haul downstream to Samarinda.

next: we move elsewhere in Kalimantan, to Banjarmasin 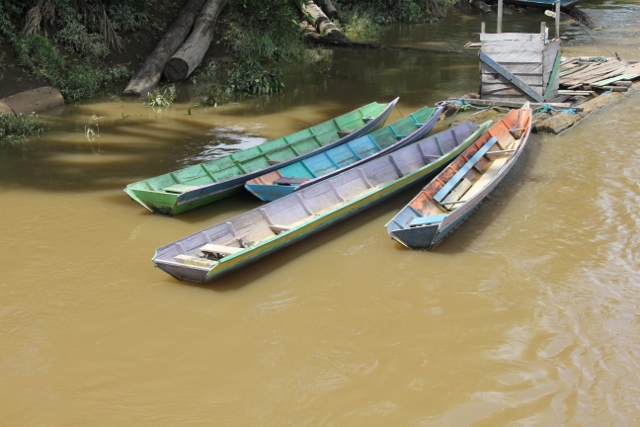 colourful canoes moored along the river 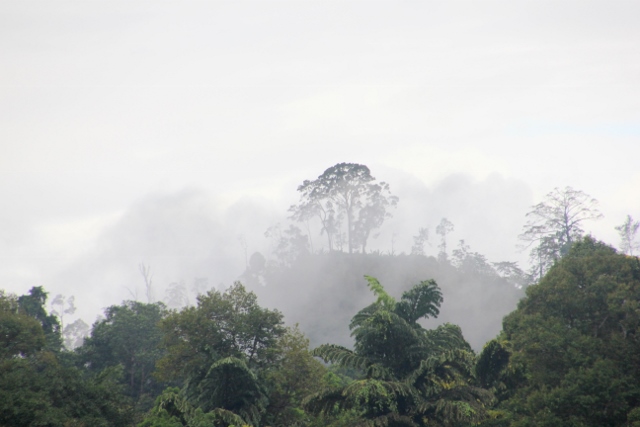 jungle in the early morning mist

2 Responses to 60. the Upper Mahakam River