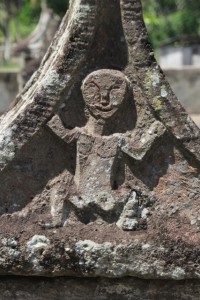 A cemetry with a difference, bringing together an impressive collection of pre-Christian, synonymous with pre-Dutch colonial, sarcophagi.

In between Manado and Bitung is Airmadidi – “boiling water”, in Bahasa Indonesia, referring to a hot spring – and its suburb, or adjacent village, Sawangan This is where the Minahasans have brought together the tombs of their forefathers, those that still existed in the surroundings, to protect this part of their cultural history. 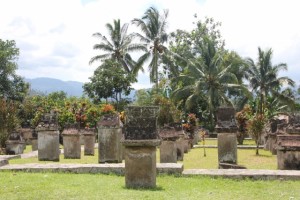 sarcophagi in the Minahasa cemetry in Sawangan 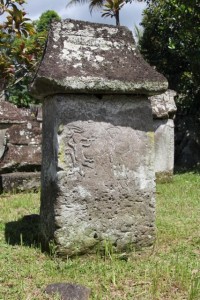 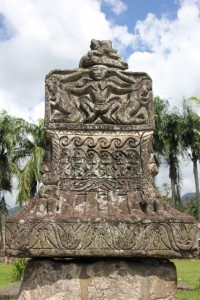 Before the Dutch, staunch Protestants as they were, with little room outside the dogmas of their religion, banned the practice in 1823, the Minahasans buried their dead in large, stone sarcophagi, hollowed out rocks in which the bodies were placed upright, in the fetus position, accompanied by rich offerings. Most of the contents has disappeared, by now, grave robbers you’ll find everywhere, but the sarcophagi and their covers remain, often intriguingly decorated with carvings of men and women, or other symbols. Seeing them all together, realizing the amount of work that must have gone into creating them, such a long time ago, is in fact quite impressive.

next: we move to Kalimantan, starting in Samarinda 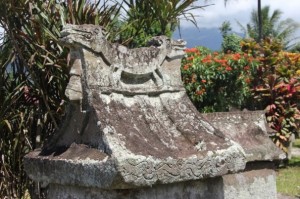 a double dragon, or crocodile, perhaps 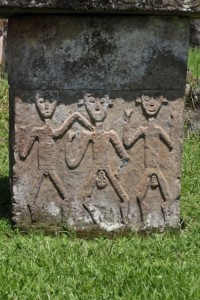 sometimes, the sarcophagi are also carved, like this one depicting a man and two women, giving birth