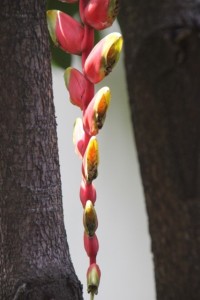 one of the many tropical flowers in Bogor Botanical Gardens

Bogor is home to the more than 200 year old brilliant Botanical Gardens, a spectacle of trees, plants and flowers, especially its orchids. Getting there is a whole different story.

Bogor is less than an hour’s drive from Jakarta – if there is no traffic, which almost never happens. With traffic, for instance on Sunday mornings when all of upper-middle class Jakarta takes off for a day in Bogor, it easily becomes a three hour ordeal. We could have rented a car, of course, the easy solution, and become part of the ordeal, but to defy the notion of using public transport so early in the game, would be tantamount to admitting defeat even before the battle had begun. So we enquired about public transport, to learn that busses leave from a bus station on the outskirts of Jakarta, almost halfway Bogor, whilst Express trains – according to our hotel receptionist – depart from the centrally located Gambir station every hour. 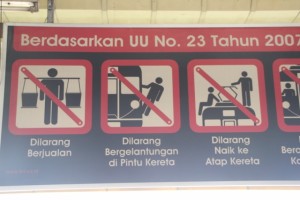 in the train station it tells you NOT to hang out of the train, and NOT to get on the roof; in fact, along some of the platforms metal frames with barbed wire are placed to avoid people climbing on top of the train – perhaps these do get busy on weekdays 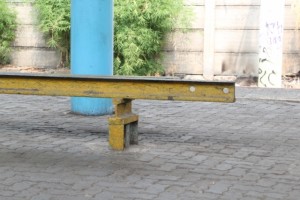 benches on the stations are a really simple affair, just some track welded toghether

That sounded attractive. Only to be told at the Gambir station that Express trains don’t run anymore, already for a year or two, and Ekonomi trains depart from another station. Most guidebooks and internet sources speak horrors of the Ekonomi trains, overcrowded and full of criminals, but how busy can a commuter train – because that’s what they are – be on a Sunday morning? Not. In the end the whole exercise, two short taxi rides and a train trip to Bogor, was completed in well under two hours, and we had our first experience of the Indonesian train system under our belt.

Bogor is famous for its Botanical Gardens, started by Sir Stamford Raffles in the time the treacherous English had conquered the Dutch Indies during the French occupation of The Netherlands, and they were greatly expanded by the Dutch – after they had somehow convinced the English to surrender the Indies again – to include a research center in 1817. This is where many of the successfully introduced commercial cash crops were first tested, to see if they would prosper in the Indonesian climate and soil. 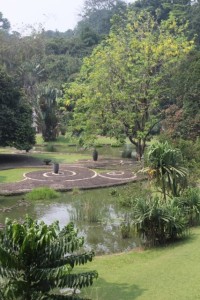 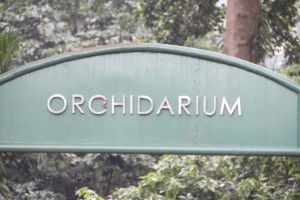 I thought I had made up this word, until I saw this! It exists! 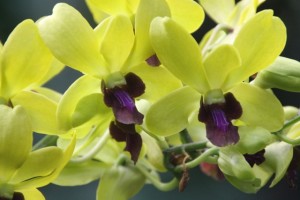 I could posts 100’s of flower photos; this is one of the brilliantly flowering orchids

The Garden comprises a huge area, with various special collections: there is a Mexican garden, an aquatic plants collection, a palm tree collection with over 400 species. There is a palace, a tennis court – who on earth would want to play tennis here? -, a restaurant. And best of all, there is the orchidarium (a word I thought I had dreamt up myself, but later saw confirmed as actually existing). One section is inside, in a dedicated building where several types of orchids grow in pots, displaying superbly beautiful flowers. The other part is outside, where a lonely gardener lovingly nurtures the orchids that have been relegated to this section because their flowers are much smaller, much less expressive. To the extent that we would probably have left soon after entering this part, but for the same old gardener who, for the next hour or so, took us, full of pride, from one hidden little flower to the next. And then on to the medicinal plant section, also his baby – including a stone path designed to stimulate reflexes under the soles of your feet, a painful experience!

I didn’t know that wandering through a Botanical Garden could be so much fun. And I am sure we didn’t see half of it, yet.

next: to Java’s south coast, Pelabuhanratu 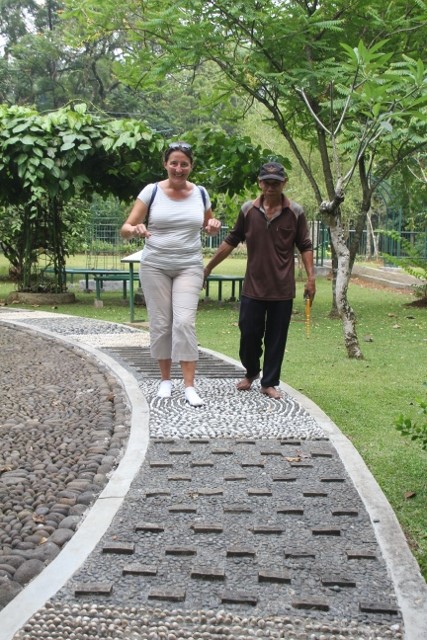 the specially designed path to stimulate reflexes under the soles of your feet, and the old gardener helping some haphazard tourist along