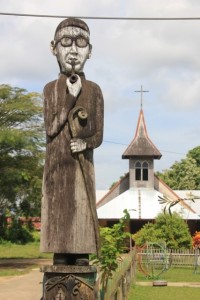 the patong of a Dutch priest, in Barong Tongkok

Comfortable base for exploring genuine Dayak longhouses and mausoleums.

Another ces (engine-powered canoe) brings us from Muara Paho to Melek, a fairly large mining town. Under normal circumstances, this would be a 2-3 hour affair, but thanks to the high water we take a short-cut, which cuts of a significant bend in the river, and reduces the travel time to a little more than 1.5 hours. Which is quite enough, because the river here is still quite wide, and not a very exciting scenery. 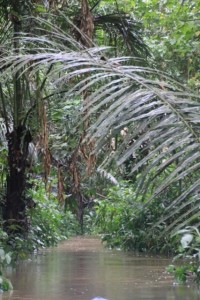 the shortcut, a really narrow channel 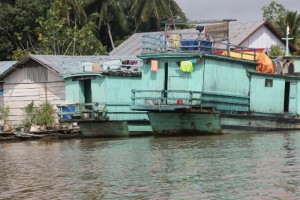 some boats moored along the river bank, on the way to Melak 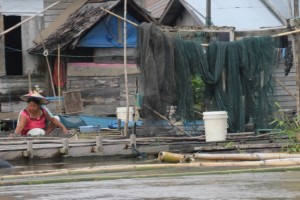 a woman and her husband’s nets 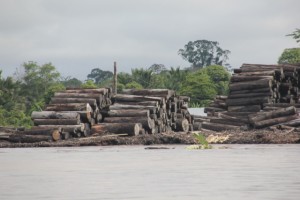 logging is a big thing, here

The river near Muara Paho is, supposedly, home to the freshwater Irrawaddy dolphins, but with so much debris, and rubbish, in the river, it is impossible to spot which hump on the surface is a dolphin’s head, and which is not. I take it that none of them were, as the Irrawaddy dolphin, like in so many other places where they occur, have a tough time surviving, partly from getting entangled in nets, but also because of the pollution from boats and from mining. 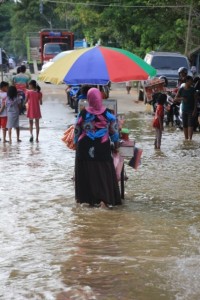 high water in Melak, inundating part of the street along the river

Getting off in Melak, we set foot again on terra firma, no board walks here – yet parts of the town are flooded, due to the high water levels of the river. The town itself is standard fare, not particularly attractive, but – to our delight – we find a hotel with large, comfortable rooms, AC and hot water, as well as satellite TV and fast internet.  Quite a change from the previous days.

Melak is a good base for exploring the surrounding Dayak villages and their longhouses, by car. On the way, we come across the Kersay Luwak Forest Reserve, a stretch of forest with, reputedly, more than 50 types of orchids. But once again, we find ourselves in a bind, the only person present at the entrance wants an exorbitant amount as an entrance fee – something like three times what we paid in Bogor Botanical Gardens – but cannot issue an official ticket. And is not prepared to negotiate. As it is still raining, anyway, we give it a miss.

We admire the longhouses at the villages of Benung and Eheng, claimed to be 76 and 53 years 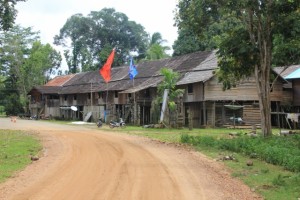 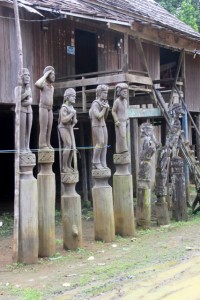 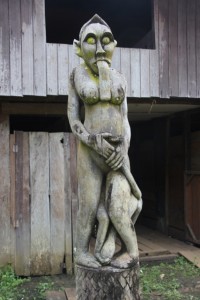 patong of a woman outside the Benung longhouse 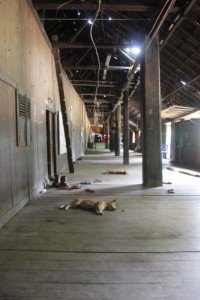 inside the longhouse, clearly being used 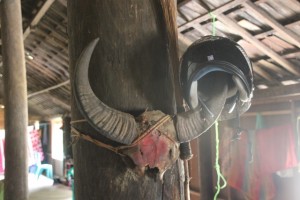 and buffalo horns come in handy 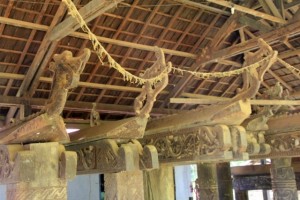 coffins in the mausoleum outside the Benung longhouse 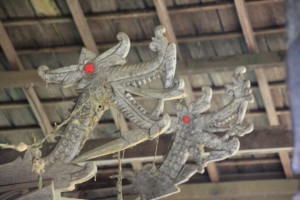 the coffins are nicely decorated with dragon heads 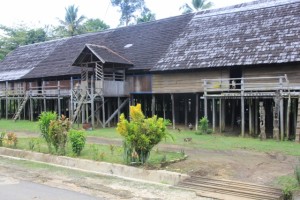 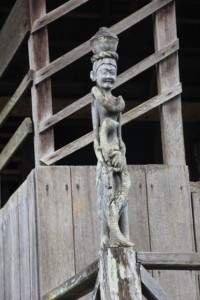 the entry to the longhouse

old, respectively, and both decorated with patongs, the wooden sculpted totems. Having seen a few longhouses now, they are in fact mainly impressive because of their size, but they are not particularly beautiful. Architecturally, the houses in Tana Toraja and Mamasa, but also the Rumah Adats in Flores and the Batak houses in Sumatra are for more advanced. And the same counts for the wooden sculptures, the patongs, which are mostly big and tall, but aesthetically not very special, and rather coarsely carved. They are often funny, though, like one with a mustache looking very much like a Dutch colonial officer – although judging from the state of the sculpture, this is probably a copy, in this climate not much of wood will have survived from colonial times. Other great examples are the patongs outside the Catholic church of another village, Barong Tongkok, depicting two Dutch priests, apparently from around 1965.

next our final stretch of river upstream