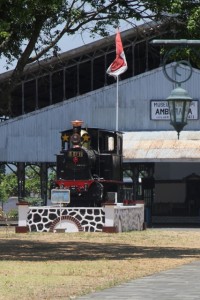 the pride of the museum, in front of the station (taken from behind the fence)

The story of a closed railway museum in Ambarawa and a simple lunch in an institution in Magelang.

The only reason to come to Ambarawa, a not particularly attractive town on the busy Semarang-Yogyakarta road, is to visit the railway museum here. I am not a particularly keen railway enthusiast, but I do appreciate train travel, and the charm of old railway stations, which in Ambarawa is the Koning Willem I station of 1873 and happens to be the center of the museum around which the ancient rolling stock has been set out. And since we were in Bandungan, very close to Ambarawa – no, we didn’t come specifically for the museum – we decided to give it a try. 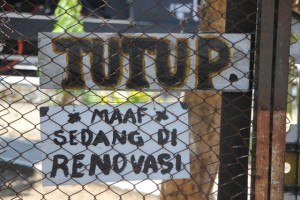 Three ankhots further, having negotiated the main through-road twice, we arrived at the museum, to find it closed for renovation. But, eh, the rolling stock – an impressive collection of railway engines – is outside, visible on the other side of the fence, and the station is an open building. Having walked all around the fence, we found the weak part; in fact a lady showed where we could climb in, which we did. Once again, illegally! Only to be spotted within five minutes, by the security guard, who threw us out again. At least he did so through the main entrance. Arguing that my grandfather had been the station master in Ambarawa, and we had come all the way from Holland to see the place, didn’t help. If we wanted to visit, we should write a letter to the head office in Semarang, and patiently wait for their response. And that was it. 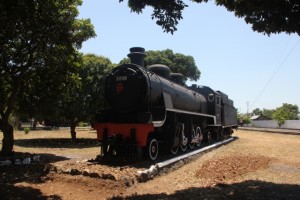 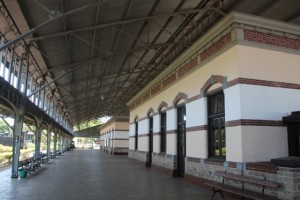 the Koning Willem I station 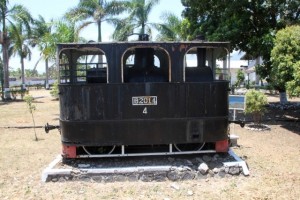 some of the rolling stock look somewhat weird 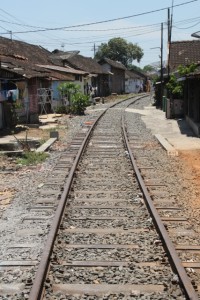 the train tracks pass right through the kampung

The good thing was that, to recover from our mild disappointment, we ended up in the restaurant of Pak Edi, who also has a car rental agency – he has a car, and he rents it out with himself as the driver. As we were heading for Yogyakarta that afternoon, this was an opportunity not to be missed, avoiding the ankhots and the busses, especially the changes. And best of all was that Pak Edi also took us for lunch in Magelang, a place about halfway, where he insisted on the Pelopor restaurant. Obviously an institution, along the main road through town, an ever so simple warung as there are so many all over Indonesia, but this one was packed, cars and motorbikes blocking part of the road and all of the pavement outside, every table fully occupied. One dish only, Tahu Kupat, which is fried tofu with lonton – sticky rice – and bean sprouts, swimming in peanut sauce. Comes in three varieties, spicy, medium spicy or non-spicy. And is absolutely fabulous!

next: back to Yogyakarta 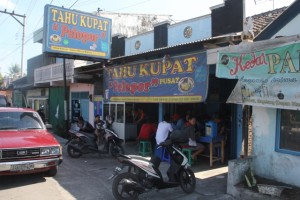 the front of the restaurant, an institution 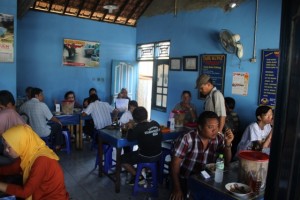 the inside, not different from any other warung, except that it is full 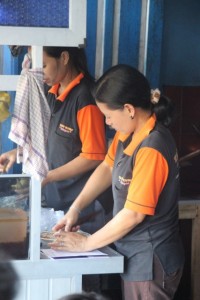 the staff, at work 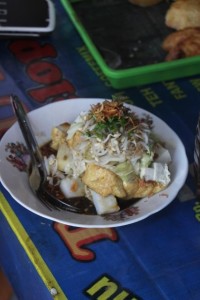 and this is what a plate of Tahu Kupat looks like

One Response to 20. Ambarawa