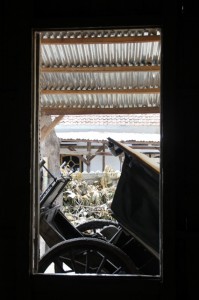 Sleepy capital of one of Indonesia’s poorest islands, with a pleasantly laid-back atmosphere.

Wainga-what? Waingapú. Capital of Sumba. And where on earth is Sumba? Sumba is one of the Lesser Sunda Islands that make up a large part of Eastern Indonesia. But Sunda is a bit out of sync in that it is located further south, more or less in line with Timor. It has no volcanoes, and geologically it is actually more a piece of Africa – adrift, to be sure – than of the Indonesian island arc. 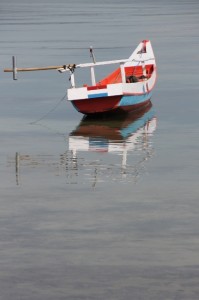 fishing boat in the old harbour

Of course, politically Sumba is an integral part of Indonesia, and ethnologically it also fits well in the Indonesian melting pot. And yet, landing in laid-back Waingapu, it seems as if we are stepping into a different world. Tiny airport. Just a few cars outside, to transfer people to town, five minutes down the road. A couple of hotels and guesthouses, no tourists, so easy to find a room, one would say. Wrong! Every hotel in town – all six of them –  is fully booked, some sort of government meeting going on, and that it is. In the end we found a small guesthouse somewhat out of town that still had a free room, but for a moment I thought that our luck had ran out. 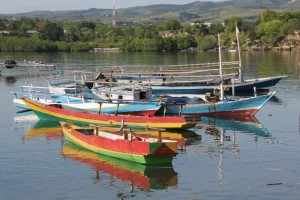 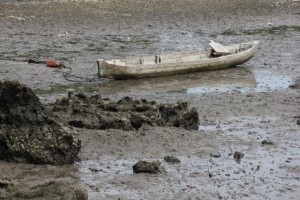 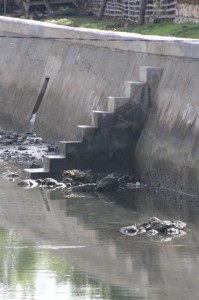 quay of old harbour in Waingapu 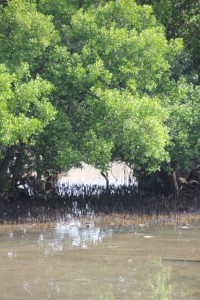 mangroves outside the harbour

A short ojek ride – the pillon of a taxi motorbike – into town brings us to the old harbor, where colourful fishing boats – mostly canoe type – are waiting for higher tide to take to sea. A couple of bigger boats are being loaded, including some of the local schooners we saw in Makassar and Surabaya. A few stall sell fresh fish outside the harbor, and for the rest, not much is happening. And that pretty well describes Waingapu: not much is happening. It is hot and humid, people hang around in the shade, or inside their small fan-cooled shops. We are about the only idiots walking, first exploring waterfront, dominated by mangroves, and the old town around the harbor, with the occasional old Dutch house, then towards the new town, slightly further inland, where the hotels that are full are, and the government buildings, the market, even a bus station. All along, rather wide streets, low bungalow-type houses with gardens, all very unpretentious, relaxed. It makes me think of Wewak, the small town in Papua New Guinea where I began my expatriate career some 30 years ago. 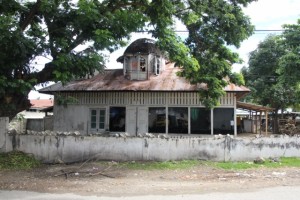 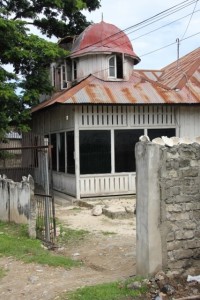 although parts, like this tower room, seems still OK 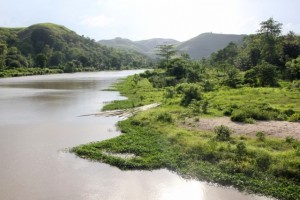 the Kambaniru river, just outside town

Late afternoon, when it is a little cooler – just a little – we take another ojek, to the dam in Waingapu’s main river, the Kambaniru. The dam itself is nothing special, at least not for us spoilt Westerners – yet it is likely to be the most impressive modern construction in Sumba, I would think -, but the drive past villages, through low hills and inundated rice paddies, is another nice experience. Waingapu never gives the impression of being a city, and five minutes out, you are indeed back in rural neighbourhoods, pigs roaming the courtyard, goats nibbling whatever looks the slightest green, and cows occupying the tombs people keep next to their houses. Perhaps not the most picturesque, but definitely thoroughly authentic. And so different from Bali!

next: a bit more on Sumba, the island 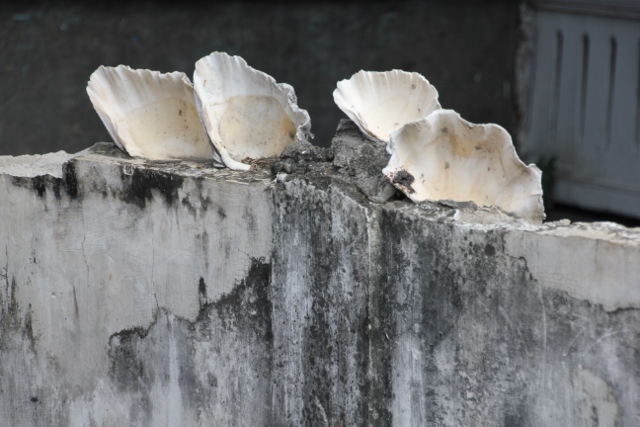 the fence of the house, how much nicer than glass shards