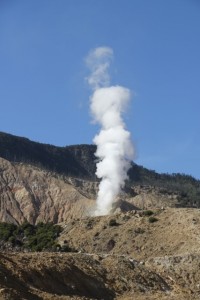 gas plume from the Papandayan volcano

A village around a hot water spring, which is being exploited by the local hotels, and close to one of the most spectacular volcano craters of Java, Papandayan.

Cipanas means hot water. There are many Cipanases in Indonesia, this one is close to the provincial town of Garut, which lies nestled in a valley surrounded by volcanoes. Volcanoes were the main reason for coming here, but we are not averse to hot springs, of course, so we booked ourselves into a really nice hotel, not only with spring water swimming pool, but also with spring water piped directly to the bath and shower in your room. I am still trying to get rid of the sulphur smell, after an indeed invigorating bath. 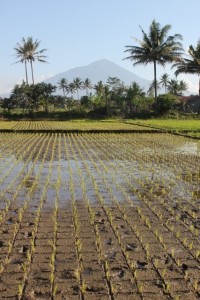 Gunung Cikuray in the distance 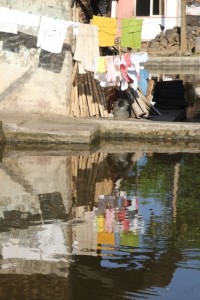 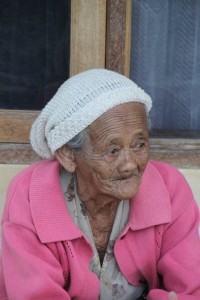 old lady in the village behind our hotel

Behind our hotel, Gunung Gunther was towering above the village, and the surrounding rice paddies. A little further down the road was another volcano, Gunung Cikuray, perfectly shaped as you would expect it. But the real target was Gunung Papandayan, one of the most active volcanos on Java. 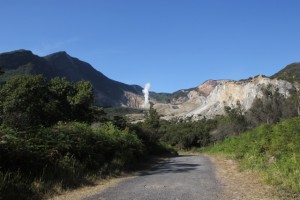 the crater of Gunung Papandayan

As with many volcanoes in Indonesia, you can drive up quite a long way, usually to within less than an hour’s walk of the crater. We had hired a car and driver for the occasion, yet the road was in such atrocious condition that I found myself wandering more than once whether walking up wouldn’t actually be quicker. In the event, having left early, we reached the parking still well before any officials, and we, and a local guide, had the mountain entirely for ourselves. Well, almost entirely: even here we were disturbed by the occasional noise of a motorbike, negotiating his way up the track to reach some unspecified location on the other side of the mountain. 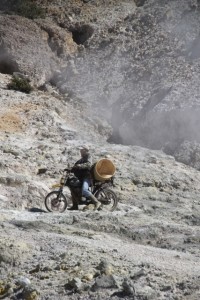 and even here, motorbikes 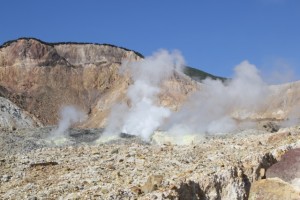 fumes and vents where the 1976 eruption took place 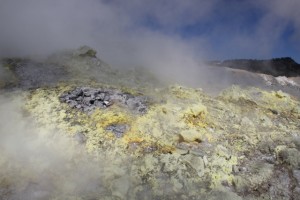 the fumes play games with the sun light, creating a very spooky atmosphere 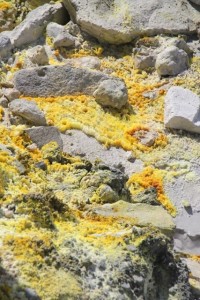 Papandayan has an ancient crater, of which about three-quarter of the rim is still intact, and in which smaller craters have formed, linked to smaller, later eruptions. The two most evocative ones are the place of a 1976 eruption, where sulphur vents and hot boiling water are still reaching the surface in several different spots, colouring the surrounding rocks orange and yellow, in a clearly very active zone with a continuous expulsion of grey smoke and an sometimes suffocating sulphur smell, and the location of the 2002 eruption, which, in contrast, consists of a serene green lake, above which just one plume of sulphur smoke reminds you that this volcano still has more in stock. Just so your forget, burned trees along the slope on the way down are another proof of the most recent activity. 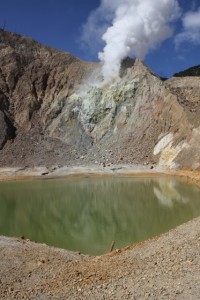 and a little further, the serene green lake of the 2002 mini-crater, with plume 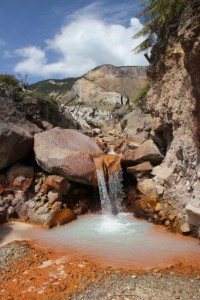 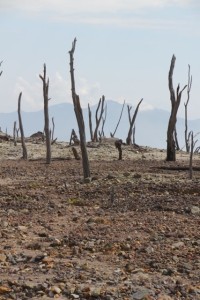 and burnt trees on the slope down

Back in the car park, a couple of hours later, the officials had arrived, and we duly paid our entry tickets, after which the usual discussion arose about how we could be made to pay yet more. We just left, not wanting to spoil the memory of a fabulous experience.