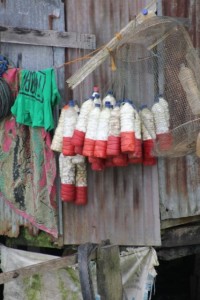 Starting point for trips on the Mahakam River, Samarinda has little else to offer.

Our arrival in Kalimantan was by plane: having learned from the Pelni experience – boring, in first class – we flew from Manado to Balikpapan, the so-called gateway to Eastern Kalimantan, and got a taxi to Samarinda, a two hour drive.

Kalimantan (the Indonesian part of Borneo) is, once again, different. Here no rice paddies, no neatly kept gardens, no densely populated countryside. Instead, there is this frontier atmosphere. Except for the main Balikpapan to Samarinda highway – still a two-lane affair -, roads are rough and unfinished, tracks disappear into the jungle, to mines. The general driving style is what you would expect here, maniacal. Many houses seem to have been constructed in a hurry; many are still being constructed. The rubbish is back, along the road, and in the kampungs and the villages. 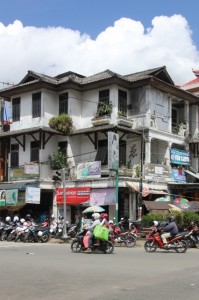 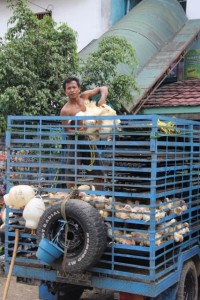 chicken seller in the Pasar Pagi

Samarinda fits the picture. Apart from a few fancy hotels and the inevitable malls, the town is mostly two-story buildings, run-down. Not much has changed: Carl Bock, who traveled in Kalimantan in 1879, and about whom more later, said of Samarinda “this is the most miserable place I have ever seen, the natives and their buildings correspond in squalor”. The town will have grown since Bock’s time, but the main activities still happen in a small center, next to the river. This is where the Pasar Pagi, the morning market that lasts the whole day, is, and where the main shops are, as well as the banks, the hotels and the rather few restaurants. People are generally non-communicative. 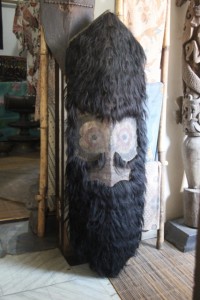 Dayak shield, allegedly decorated with human hair, in the antique shop; we need to establish a bruno&sofia foundation accepting generous gifts to facilitate the acquisition of this piece

And yet, appearances deceive. On our second day in Samarinda, we also meet some extremely friendly people, the travel agent and her husband who help us find tickets, and a whole lot more, the antique dealer who happily spends half an afternoon talking to us even though he knows we are not going to buy anything, the cook who takes the initiative and buys fresh bread especially for the only two foreigners in the hotel.

The only reason to come to Samarinda is to commence a trip up the Sungai Mahakam, the Mahakam River, an over 900 km stretch of water into the Bornean interior. There are tour operators, of course, and one can use comfortable house boats to visit the more accessible parts of the river. Not us. There is also public transport in the form of what is called the kapal biasa, a river ferry that runs as far as the water level allows it to run, and for shorter excursions away from the main river you can hire a ces locally, a wooden canoe with outboard engine. Plenty of villages along the way, for accommodation and food. The one key requirement is that we travel light; luckily we identified an old colleague of mine who now lives in Samarinda, and he agreed to look after our suitcases. view of the river side in Samarinda 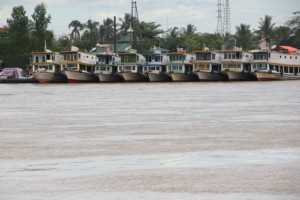 the place where the kapal biasas leave

Ah, and the other key requirement, of course: finding out where and at what time the kapal biasa leaves. For this, we need the advice of Bock’s natives. The Samarindans hadn’t stuck us as particularly forthcoming or helpful, rather indifferent to foreigners, but now they showed their true, shall we say, entrepreneurial side. The hotel receptionist flatly denied that there was anything like a ferry, and began to organize a car for us – on which he would no doubt earn a commission. We walked to a more upmarket hotel, which would perhaps have a travel agent, but they didn’t, and they claimed not to know about the ferry either. They were equally happy to organize a car, or even a speedboat – no doubt for the same reasons. We asked the police. They proposed to rent out their patrol car to bring us upriver. After insisting that we wanted to go by boat, they admitted that there was a ferry, but they didn’t know where it left from, only that it left at 4 am. In the end three men in the street, who could not possibly generate any business interest from us traveling upriver, told us what we needed to know, and the next morning, just before 7 am, we boarded the kapal baisa to Muara Muntai, our first target – a place where even with the best will of the world, you cannot get to by car.

but first, a little explorer’s history, and the first part of the river journey 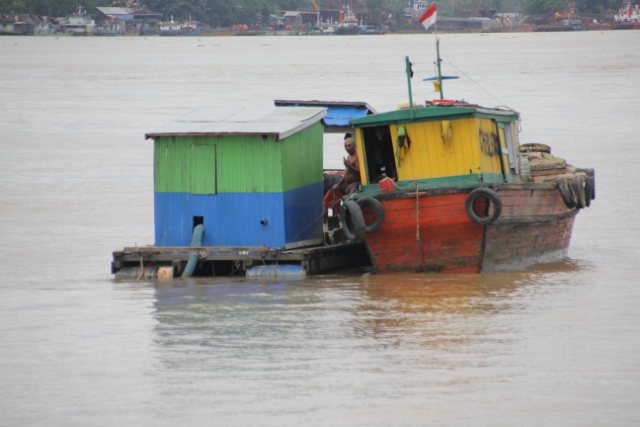 two barges in the Mahakam River outside Samarinda