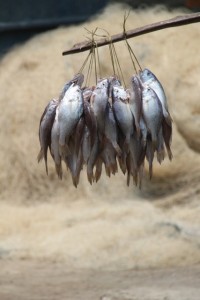 fish drying in the Palabuhanratu harbour

An attractive fishing town on the South coast of Java, with a colourful harbour full of large and small boats, and an active fish market.

On the southern side of Java, south of Bogor, is the fishing town of Pelabuhanratu. We took a bus to get there, fairly comfortable, air-conditioned, that’s all OK. It is just that there are no traces anymore of these impressive four-to-eight lane roads we saw in Jakarta. Two lanes, potholed, is all we get, which needs to be shared with frequently overtaking traffic from the opposite direction, and with motorbikes. Along this road we also begin to appreciate how densely populated Java actually is. Whatever there is in terms of countryside – rice paddies on the hills, some patches of coffee, and not particularly well organized rubber trees, not particularly attractive altogether -, is mostly shielded from view by buildup construction on both sides, mainly shops and small businesses. 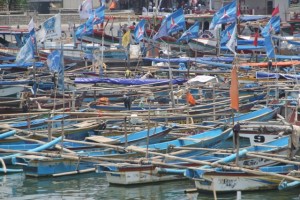 boats stacked in the small harbour 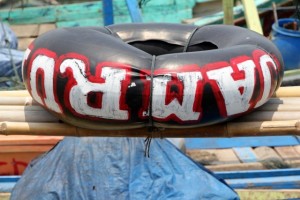 some of the fishing vessels are well equipped, with life boats and all 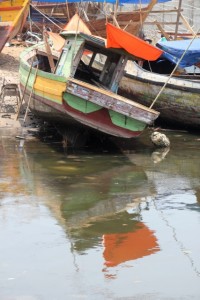 not all the boats will be going far, soon 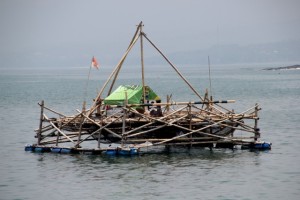 what I would call a fishing contraption

The main thing in Pelabuhanratu is its fishing harbour and the market. A whole range of vessels are moored, or just stacked, in the small secluded port: a colourful, if somewhat chaotic state of affairs. Some of the bigger boats are clearly seaworthy, but from many of the smaller ones I have so my doubts, and the outrigger canoes surely don’t go far offshore, I may hope. Pelabuhanratu is also the place where Nyai Loro Kidul, the Queen of the Southern Sea, a creature that in popular Javanese mythology rises from the sea to take fishermen and visitors, occasionally features – not surprising if these people do get too far away in their contraptions.

Talking about contraptions, some distance offshore are moored a whole range of bamboo platforms, with small huts on top. These are also fishing structures, with nets underneath that are being lowered at night, in the hope that small fish and shrimps that don’t know better are being trapped, and can be retrieved the next morning. Apparently, catches are pretty meager from this process, but people keep on using them, staying offshore for a night, or so – despite the threat of Nyai Loro Kidul. 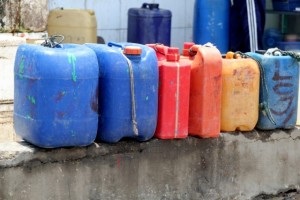 fuel containers waiting to be taken onboard 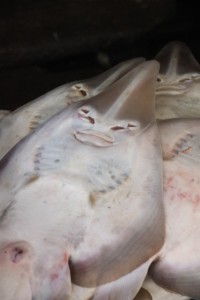 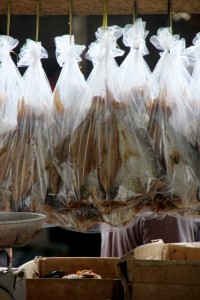 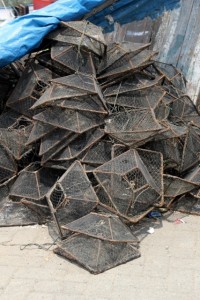 The fish market shows that catch from the boats is more impressive. Huge tuna and blue marlin, eel, even small sharks, the variety for sale is endless. We were late, most of the fish had already been sold, but there was still enough to keep us entertained for a while (seasoned readers know my obsessions with markets). Furthermore, lunch at one of the seafood restaurants along the beach kept us busy a little longer (seasoned readers are equally aware of this returning subject). 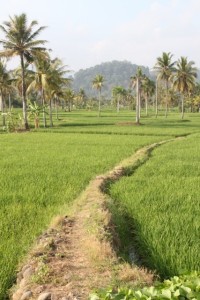 ever narrower dykes between the padis… 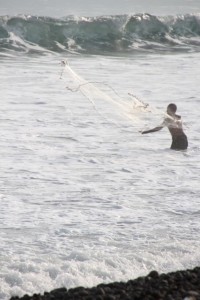 fishing on the beach 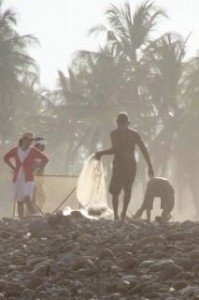 with a minimal catch, but never mind

We had found a nice little hotel in the nearby village of Cimani, which rented out bungalows situated in between the rice paddies, beautiful setting and a short but challenging walk from the sea – challenging as in ever narrower earth dikes in between the paddies, at places a real balancing act. At the pebbly shore, more fishermen. Don’t these people do anything else?