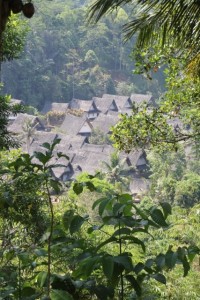 Kampung Naga, down in the valley

An original Sunda village in between picture-perfect rice padis.

What we know as Indonesia, is in fact a collection of different groups thrown together in an ethnic melting pot. The original West Javanese culture is that of the Sunda, one of the biggest population groups, who have historically occupied the highlands. Of course, cultural differences, also in Indonesia, are increasingly disappearing with ever further integration, but there are pockets of Sundanese that remain proud of their heritage. 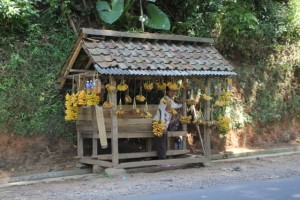 banana stall along the road 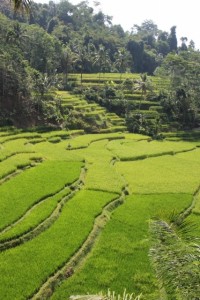 One such pocket in Kampung Naga, a typical Sundanese village between the provincial towns of Garut and Tasikmalaya. The village, situated in between picture-perfect rice padis at a riverbank down a steep valley, consists entirely of original Sundanese houses, tightly packed together. All the houses have been made from bamboo mats, forming the walls, and thatched roofs, and they look well maintained. The villagers, obviously proud of their village, do not allow any modern construction, like corrugated iron or concrete walls. Some recent improvements, like concrete washing basins and stone paths, have been added, but even these have been neatly integrated into the village – rather unusual, I would say, as in most places I have come across, modernity has crept into villages as an ugly, but convenient and cost-efficient replacement of original materials, with little regard for the esthetic consequences. Not so in Kampung Naga, where people have clearly gone out of their way to maintain the original character of their village. 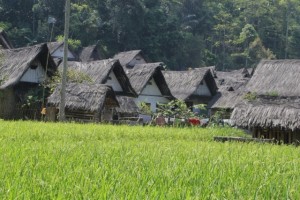 all original houses, built close together 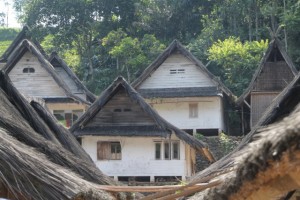 and the houses are well-maintained 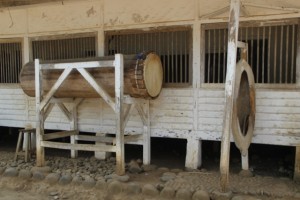 local musical instruments on display – no, we didn’t make an offer, and we are not carrying them home 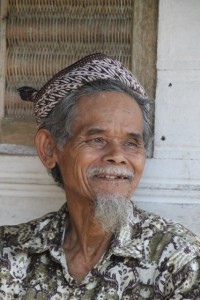 one of the villagers 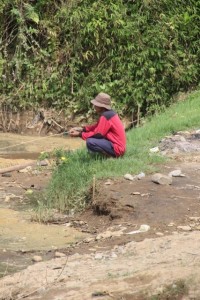 and another one fishing, and oblivious of the visitors around him

There is an eerie atmosphere around the place. Obviously a touristic attraction, there is no entry fee, and the village only seems to benefit through some souvenir production, bamboo baskets and bags and the lot, and perhaps selling some drinks – especially on the way back up, to the car park, a steep climb! Visitors, foreign and Indonesian alike, walking in between their houses doesn’t seem to disturb the villagers, who keep going about their business, largely ignoring the outsiders – but ever friendly, and ready for a chat if you show interest. A bit unreal, altogether. And I don’t get the business model. But a nice enough excursion it was.

Another expression of Sundanese culture we got that evening, in Tasikmalaya (where we were to catch the train to Jogjakarta the next day). In a tiny little garage Imra Nurdin had started her own business, Kampung Tasik, a Sundanese speciality restaurant. We seldom before had such good Indonesian food, so good in fact that we forgot to take a picture of the dishes before we devoured them.

next: by bamboo raft to a little island temple

One Response to 13. Kampung Naga