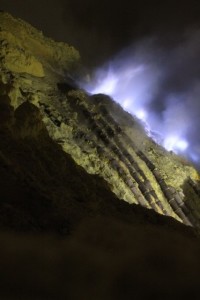 blue fire at night, inside the Ijen Crater

A fabulous night time experience inside the Ijen Crater, followed by a sunrise creating an ever improving early morning view of crater lake and surroundings.

Having had just a couple of hours of sleep during the afternoon and early evening, we were once again driving into the night, towards the Ijen Plateau. The plan was to arrive around 1 am, walk up to the Ijen Crater rim, then down into the crater itself to observe what is being called “blue fire”, the spontaneous burning of sulphur vapour which is only visible at night – the precise details of this phenomenon are still unclear to me. Then climb out of the crater again, to experience sunrise around 5 am at the rim.

For most of the two hours in the car, we drove through forests and plantations, spookily lit by an almost full moon and a sea of stars in a cloudless night. Occasionally, the dark outline of volcanoes showed against the skyline, only slightly lighter. Just after 1 am, we started walking up the Ijen slope, following a clear path, which got steeper and steeper. How did we long for the mountaineering of the masses, every time we stopped to catch our breath again! But in reality the walk, all 1.5 hours of it, was the most fabulous walk we have done so far, illuminated by moon and stars. And it wasn’t that hard, after all. 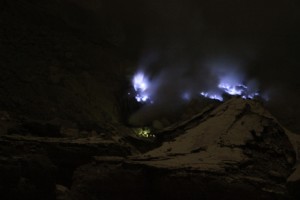 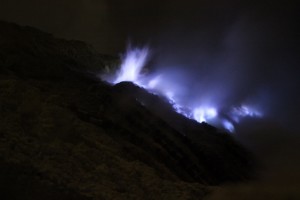 and even more blue fire

No sooner did we reach the crater rim, or we descended again, this time using an ever steeper path, much narrower, sometimes climbing from boulder to boulder, into the crater itself. This is the path used by the sulphur workers, men who mine almost pure sulphur next to the vent where sulphur vapour escapes from the crater floor, and then carry up to 90 kilograms of the yellow blocks on their shoulders out of the crater, and down the slope, day in day out. Some kind of a job! We were aiming for the mining spot, in fact the end of an ingenious ceramic pipes system through which the volcanic fumes are channeled, and from which molten sulphur precipitates. Next to the “mine”, in between the hot clouds of odiously smelling sulphur smoke that occasionally obscure the view, is the “blue fire” that we came to see. And blue fire it is, huge flames, burning in several spots on the edge of the crater floor. A sight I have never seen before, breathtaking – also literally, sometimes when the wind changes slightly, and we are all coughing in sulphur fumes. 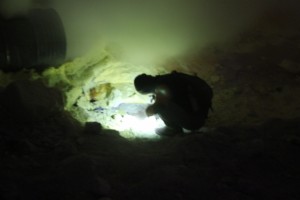 one of the sulphur workers, at the “mine” 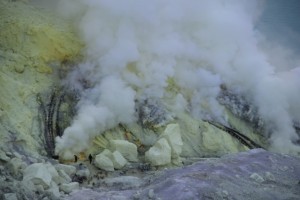 the mining site, by daylight 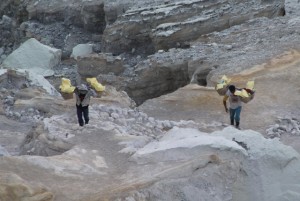 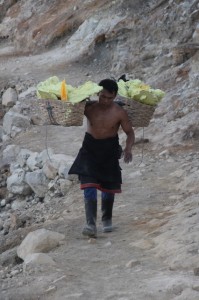 and another one, who just reached the crater rim 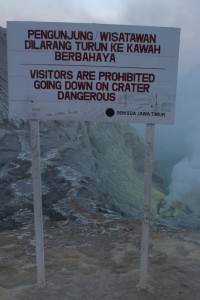 it was only when we emerged out of the crater again, by daylight, that we saw this sign….

By five, we were back up at the crater rim, for the sunrise. Which was rather disappointing, hidden behind one of the surrounding mountains and obscured by distant clouds. But for the next two hours we had been wanting to leave, to go back to the car, only to linger around just long enough, each time, to enjoy more and more of the surrounding landscape. First, some of the smoke from the sulphur site below cleared, to show the lake that covers most of the crater floor. Apparently the most acid lake in the world – which you don’t see, of course –, the colour was a dull grey, only to change to wonderful blue-green with increasing sun light clearing the mountains around us, and reaching the crater. And it got even better when the sun also started to illuminate the side of the crater rim. And when the sun finally reached us, too, doing something about the chilling cold that had almost made us leave far too early. 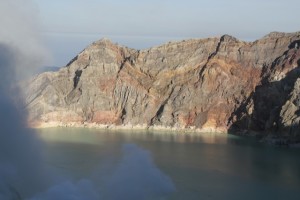 with the smoke somewhat lifted, and the sun up: the acid lake and the illuminated crater wall 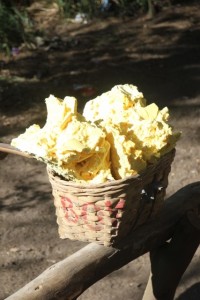 Walking down the steep path, back to the car park, was almost tougher then walking up, and an assault on the knees (which are holding up well, thank you). But the night on the Ijen was worth every piece of effort, and every minute of it. Absolute highlight of the trip, so far!

The downside was, of course, that our driver, although never participating in any of the hiking, also hadn’t slept for two nights, and admitted to watching television in the afternoon, instead. And for driving Indonesian roads, you ‘ve got to be alert, traffic overtaking both on the right and left being the norm, also from the opposite side. In the end we had to force the poor guy to stop and sleep, totally against the prevailing macho attitude of your average driver. But it did improve his alertness significantly, to the extent that he felt confident enough now to increase speed, as well as, let’s call it, road assertiveness. The last few hours’ drive back to Surabaya were even more frightening than the early ones in which he almost fell asleep behind the wheel.

next: the ferry crossing to Makassar, on the island of Sulawesi 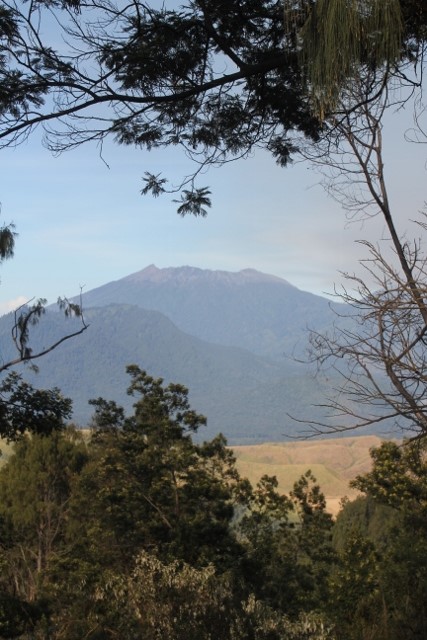 on the way down, we have a splendid view of the Raung Crater in the distance