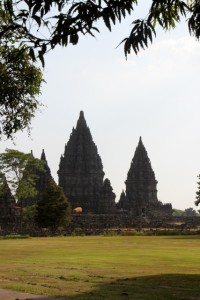 A second impressive temple complex outside Yogya, just as evocative as Borobudur, but more spectacular in its first impression.

The other ancient temple complex outside Yogya is Prambanan. Where Borobudur is a Buddhist temple, built by the Sailendras dynasty, Prambanan, built around the same time, 8th and 9th Century, is Hindu, built by the competing Sanyajas dynasty – an illustration that the kingdoms of that time were rather small. History is rather vague, but they definitively were at each other’s throat, for most of the time, but also may have intermarried to secure power, at a later stage. History is vague, but predictable. 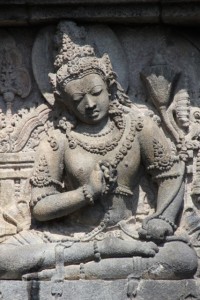 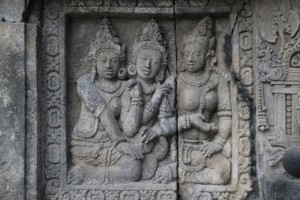 similar type of bas-relief as in Borobudur 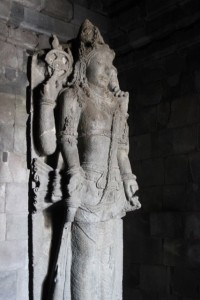 and the occasional statue inside the temple

Architecturally, Borobudur is a big, but rather plumb, broad structure, where you can hardly see the top when you stand at the base, whilst in Prambanan the temples are tall, and visibly impressive, from a distance and from nearby. Once again, the bas-reliefs that adorn the temples are the most attractive part; for relative laymen like me, there is little difference in the carvings, between the Buddhist and Hindu temples. Many motifs from Borobudur are very similar to what we encounter in Prambanan – perhaps thanks to this power consolidation. 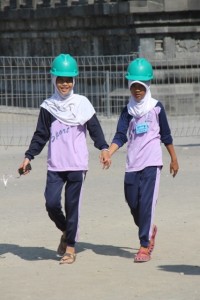 the only colour is provided by the green hardhats 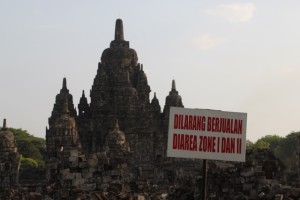 and by the occasional sign board, not sure what it announces

Like in Borobudur, they make you wear a sarong around the hips, to show respect (to the temple, to the Buddha, to the Hindu deities? – this remains unclear). Of course, the guards and cleaners, and any local officials, have been absolved from this ritual, which makes the story of respect a whole lot less convincing, but they do insist (at one stage I tried to walk around without my sarong, and was immediately reprimanded by the ever present sarong police). The area around the main temple, the Shiva temple, may only be entered wearing a green hardhat. After the 2006 earthquake, the temples were badly damaged, but this one has now been declared stable. Hmmm. Hardhats will protect you from small rubble falling, but this temple consists of big blocks of stone only. If one of those comes down, no hardhat is going to save you, so this looks like another useless ritual, but hé, let’s conform, for a change. 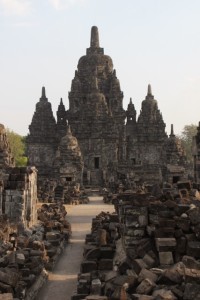 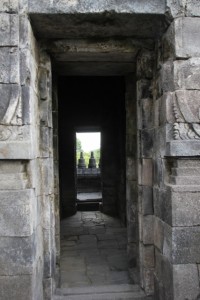 another view of the temple 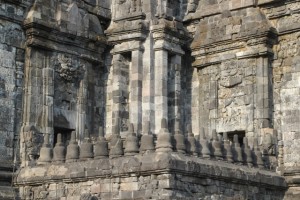 and some of the workings of the outside wall

The main temple area is busy, this is where all the tour groups go, and the groups of school youths. They swarm over the Shiva temple and the accompanying temples around it. Ten minutes’ walk away is Candi Sewu -the Sewu temple -, a slightly smaller complex, somewhat less restored perhaps. There is nobody, we are alone. The Indiana Jones-feeling is back. Altogether a really nice experience.

We take the Trans-Jogja bus back to town, a comfortable 45 minute public bus ride for 20 cents each. The ticket lady doesn’t trust our capacity to find our way, and decides to come on the bus, too, to make sure we change at the right place, to the right connecting bus.

next: on to Solo