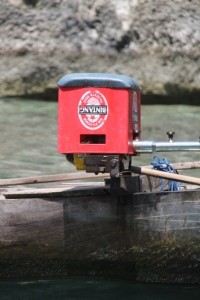 Before you all go out and book yourself your next holiday to the Togian Islands, there are a few things you need to know. I already said they are rather difficult to reach, with the need to either get to Ampana, from which there are five or six ferries per week, or to Gorontalo, with only two ferries per week.

Once you have reached the islands, you need to decide where to stay. We opted for Kadidiri Island, with the choice of three lodges, less than half an hour away from Waiki, euphemistically called the capital city of the Togians. Other islands are further away, and involve much longer travel from Waiki – and presumably still have the same fishes and the same reefs. But it is low season, which also means less effort: some of the people we met on Kadidiri have been elsewhere, too, and mention an overdose of cockroaches and rats in their rooms there. We decide to stay on Kadidiri, instead. 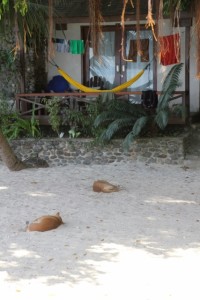 the Black Marlin cabins, and the dogs in characteristic position 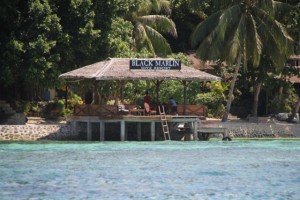 The Black Marlin Dive Resort is the fanciest of the lot, with a thin veneer of professionalism. Rooms, little cottages on the beach, are pretty basic, but come with balcony, hammock, mosquito nets, ceiling fan and flush toilet. But with electricity limited from 5 to 11 pm, fans are of little use, and with water limited to one hour in the morning and one in the late afternoon, the flush mechanism of the toilet is also superfluous. The rooms are not being cleaned during occupancy. When we ask for at least the rubbish bin to be emptied regularly, one of the staff picks up our bin from the balcony, and turns it upside down behind our cottage, just like that. And obviously not for the first time. 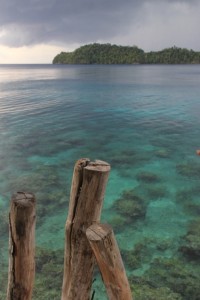 view from one of the lodges on Kadidiri 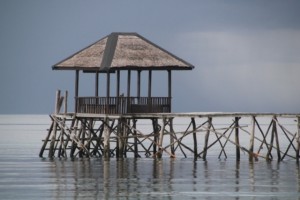 the jetty of one of the lodges, with more threatening weather 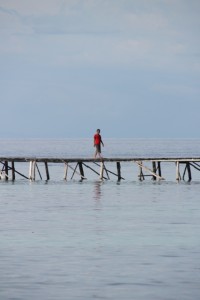 the same jetty at the best of times

There is no internet. Phones are clustered around a the edge of the terrace, where occasionally there is signal reception. Whenever a phone beeps, somebody is running towards it, keen to have some outside contact. Often, it is just advertising, one of those annoying characteristics of the Indonesian mobile phone network. 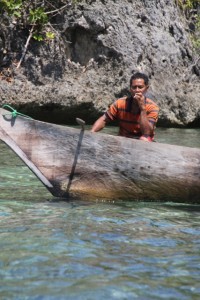 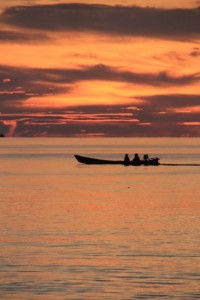 Food is spectacularly variable. One day, we have fresh barracuda, superbly grilled, and fresh vegetables, the next day we have white rice and mie goreng with fish heads, nothing else – my birthday dinner. And no choice. The wine, the sangria, the fruit juice, all on the menu, they are unfortunately not available. Tomorrow? No, not tomorrow either. Day after? They do get fresh supplies daily, from Waiki and further away, right? I give up, it will just be another beer, and a big bottle of water. No choice.

The people are very friendly, and they try. But not very hard.

next: with time at our hands, there is room for a little history, for some examples of crabs, or skip this and continue to Gorontalo