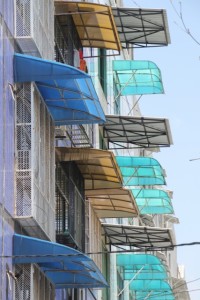 A vibrant city, geared to shopping along the coast or in the market, and to good eating and drinking.

There is precisely one tourist site in Makassar. Fort Rotterdam – indeed, an old Dutch fort built on the remnants of an even older fort – is a rather uninteresting affair, a few of the crumbling ramparts still present, surrounding a heavily restored set of buildings which are being used as equally uninteresting museum. 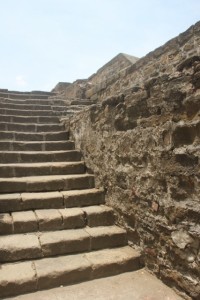 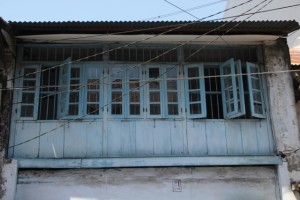 but some nice old houses still exists, with wooden windows 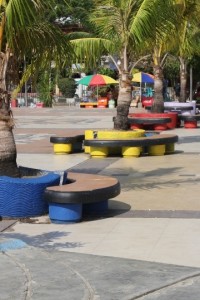 they have started smarting up the boulevard area 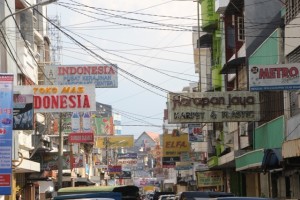 Makassar shopping street near the coast

But Makassar is much more than a lonely tourist site. It is a sprawling city, the biggest on Sulawesi, and the central part – the only part we ever see, of course – is a pleasant, tree-shaded collection of broad avenues, turning into a set of narrower shopping streets closer to the coast. With absolutely fabulous seafood restaurants around every corner – what is it, that Indonesians can present a steamed fish in such a way that you don’t have to worry about the bones? And with friendly, helpful, inquisitive people – but inquisitive in a nice way, curious rather than showing of their three words of English.

Despite the heat, I took a walk on a Saturday afternoon, first trying to locate the Medan Karebosi, according to my 10-year old guide book a scruffy patch of green where youth play the occasional football match, but now turned into a thriving sports complex, with fancy tennis and basketball courts, football pitches, all well maintained – or just very new. It is just that it is not being used, none of it – the heat, perhaps? 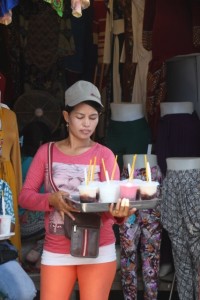 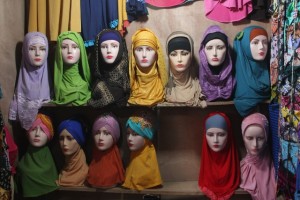 head fashion in the market

The other landmark in town, according to the same guide book, was the rickety Makassar Mall, which, however, has now been pulled down for reconstruction. Around the building site, there is a busy market, mostly for cloth and garments, which may well have been made in the factory – Bangladeshi-style, it looks like, no escape – and in the small sewing ateliers nearby.

A little further Diponegoro is buried, a 19th Century rebel who mobilized an army to fight a five year war against the Dutch on Java, only to be tricked into peace negotiations, where he got nipped in the bud by the treacherous Dutch (you expect this from ancient Chinese potentates, not a European power…), and exiled to Sulawesi to be imprisoned for the rest of his life in Fort Rotterdam. The tomb is nothing special, but it is good to be reminded that not everybody loved the Dutch colonial rule, at the time. 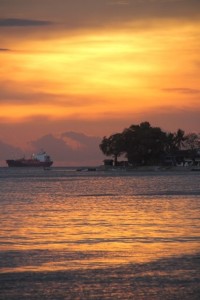 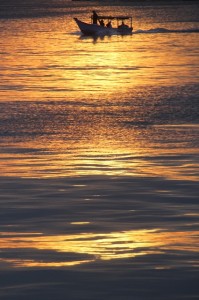 and another Makassar sunset

Back on the coastal stretch, time for Makassar’s famous sunset. The place to watch this is one of the upmarket hotels with sea view, and the one I chose was, coincidentally, also the one that has draft beer, a rarity in the land of bottles. Wonderful, seeing the sun disappear, whilst sipping from a cold beer. Only to be shocked afterwards when it came to paying: beer is always comparatively expensive, in Indonesia, but in a fancy hotel at a prime location, it is really expensive! 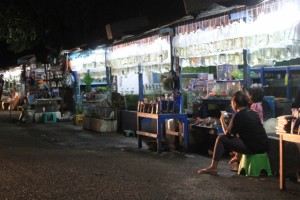 the other fish market 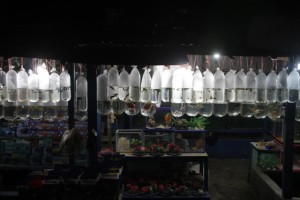 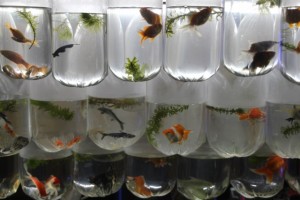 each bag contains another colour

After dark, walking back to the hotel, I came across Makassar’s equivalent of a bird market, the fish market, but not the usual type. Along the street a range of well-lit stands expose thousands of little aquarium fishes, in water-filled plastic bags. Which makes for a nice scene, although I am not exactly sure about animal rights here.

next: there is more on Makassar to come, still!