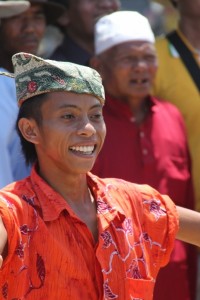 one of the bull span drivers,having fun in the process

An unique bulls’ race festival, which was unfortunately postponed, which left us to watch the bulls’ beauty contest, instead.

Pulau Madura was not initially in the plan. But before we left, somebody told us to go and see the place, because the people were so different – well, we have experienced that. And when I found out that they do bull races on the island, too, there  was yet an additional reason to try to fit in this strangely unique place.

The Karapan Sapi – the bull’s race – is the most prestigious annual event on Pulau Madura, perhaps dating back to as early as the 15th Century. This is where cattle owners can not only show off their animals, but also make a killing: winning bulls are turned breeding studs, with a reputation that pays back. No wonder the bulls are being treated well, for most of the year: they are fed well, of course, including huge quantities of raw eggs, and reputedly they are even massaged, and sung to to get them to sleep at night.

Only at the races, the treatment turns uglier. The bulls race as a span of two, against another pair, over a distance of some 100 meters only, for which they take only some 10-15 seconds. The fastest time is reputedly 9 seconds. Before the race, the bulls are given chillies, ginger, and apparently even a dose of alcohol – quite an intervention, in a starkly muslim society! – to make them go faster (aspiring athletes should take note, this seems to be more efficient than doping; I don’t think Usain Bolt ever ran it in 9 seconds flat!). And just so they don’t misunderstand, the bulls’ tails are adorned with nails, as is the jockey’s whip. The jockey is balancing on a wooden toboggan of sorts, which is being pulled by the bulls.

The annual contest starts with elimination heats at village and district level, every year in August and September. The final, the Piala Presiden (President’s Cup) is somewhere in October, this year planned for the 20th. Which, with a bit of program massaging, suits us very well, thank you. Only to learn that, because of concern about animal cruelty, the Governor, the main sponsor of the Piala Presiden, had, just this year, decided to withdraw his support. Apparently, the final has now been postponed to November. Or has it? One never finds out, in this country. 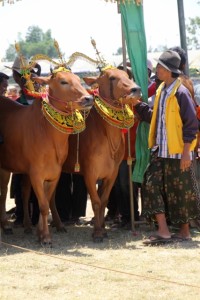 a span, decorated in gold 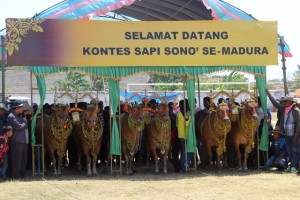 part of the contest, walking a span slowly over a distance of some 50 meters 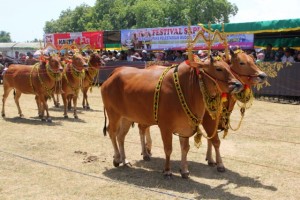 slowly crossing those 50 m, whilst staying in between the ropes, is the idea, I believe

What remains, is the bulls’ beauty contest preceding the finals, the so called Sono Sapi, in the stadium of Pamekasan, Pulau Madura’s capital. On the 19th. Here, the beautifully decorated bulls parade, accompanied by jockey, by gamelan orchestra, by dancers, and by a multitude of hangers-on, for some sort of prize. Speed is not the issue, today – what is the issue, remains somewhat unclear to me, but I think they need to slowly cross a distance of some 50 meters or so, in between ropes laid out in the sand. Whatever, it is an enjoyable spectacle, entertaining for an hour or so, and – although not the real thing, of course – equally unique as the races would have been.

next: to that other big Javanese city, Surabaya 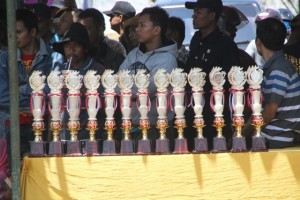 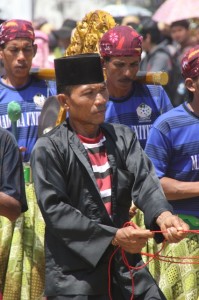 some of the drivers are very concentrated on the job 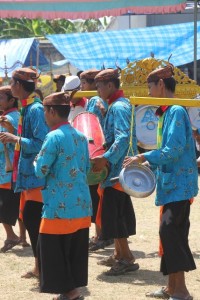 accompanied by the band 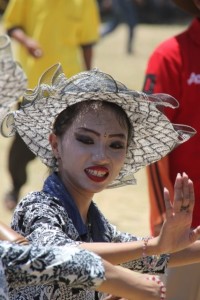 and sometimes, by dancers these bull spans are awaiting their turn, proudly 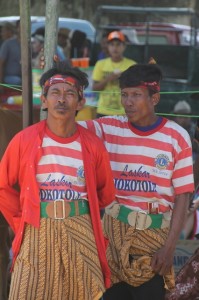 flanked by their owners, possibly even more proud 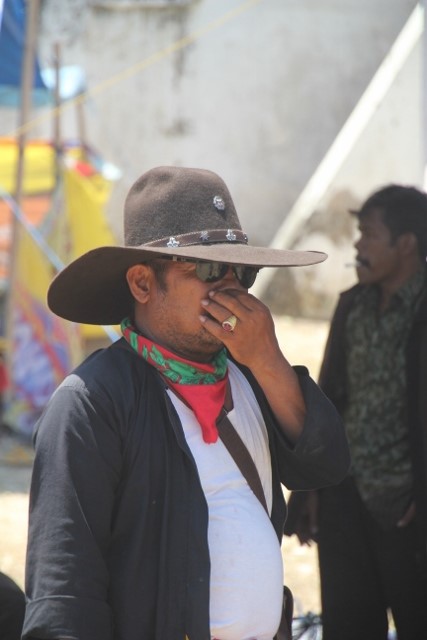 and there all sorts of characters walking around