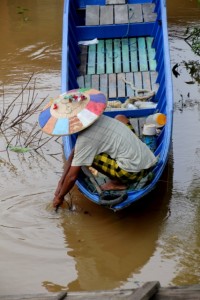 Charming small board walk village along the Mahakam River, but with rather basic hotels.

Past Tanggerong – well past Tanggerong – the industrial level subsides somewhat, there are also less houses, and the scenery becomes greener, and more attractive. We even spot some birds, herons and fish eagles, as well as small sea gull-like birds busying themselves scooping up fishes, or whatever else they find on the river. Occasionally, villages appear, now mostly dedicated to fishing – although coal remains a big issue, witnessed from the impressive amounts of it that are still being ferried downriver. 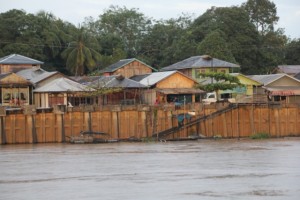 the quay in Kota Bargun

We reach the next big settlement, Kota Bargun, at 5 pm, much later than scheduled. Here there are cars again, on the bank; there is also a spectacular new bridge over the river, including a road through the low lying swamp supported by pillars, which disappears into the distance, but it seems to be leading nowhere, at least there are no cars on the bridge or the road.

The delay means that we will be continuing in the dark, and thus pick up even more delay, as the boat necessarily slows down to avoid possible collisions. If it is dark on the Mahakam, it is really dark!

We finally arrived in Muara Muntai, at 9 pm, still in the dark, of course, although there was some light along the streets. “Streets” is a big word, Muara Muntai is built over a swamp, or shallow lake, something prone to flooding, so everything is on stilts, including the roads, which are in fact raised wooden walkways. Well, walkways, somehow nobody seems to walk here, everybody has a motorbike, the sound of which takes some getting used to in Muara Muntai; every time a motorbike passes, it is as if a tank comes by, the effect of the bike riding over the wooden planks. 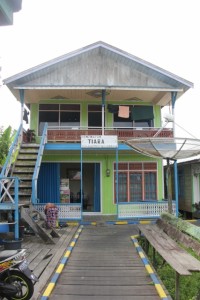 the Tiara Hotel; the satelite dish is a distraction, nothing to do with television in the hotel

We managed, with help of the friendly villagers – back to Indonesian standards, as far as that is concerned – to find a small hotel, with the beautiful name of Tiara. Which was also the only beautiful thing, for the rest it was a pretty basic affair. Our room had a bed and a small fan, nothing else – nothing else would have fitted. Shared toilet was a squatting latrine, shared bathroom was a mandi, a large water reservoir from which one scoops water over oneself, surrogate for a shower, a cold shower, needless to say. When I mentioned mosquito nets, the lady laughed, no, no mosquito nets. Towels perhaps? She laughed again, in a way that clearly indicated that I had not understood the concept of Indonesian losmen, guesthouses. So, no towels, either.

There were also no nails in the walls of the room, so with the help of safety pins we attached our own emergency mosquito nets to the curtain. The bed itself was a thin mattress on a set of hard wooden planks, not necessarily designed to hold the weight of two white Caucasians – and certainly not long enough. So two things could go wrong, during the night: the curtain could come crashing down under the weight of the mosquito nets, and/or the planks could collapse, under the weight of the two of us. Thankfully, none of it happened. After having switched off the light – by undoing the bulb, otherwise all power, including fan, would have gone off – we slept relatively well, despite the continuing sound of tanks moving up and down the village. 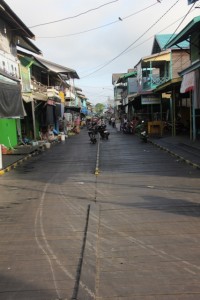 the dual carriage way board walk 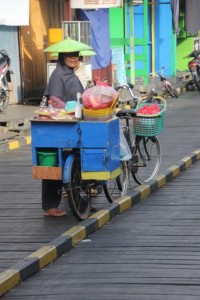 a seller occupying the middle of the dual carriage way 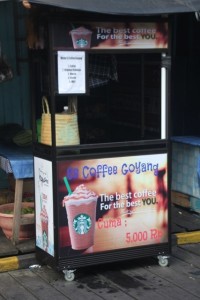 closest to a mall, an iced cappucino, on Muara Muntai boardwalk 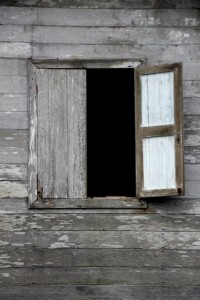 a wooden window; you’ll find that in every village 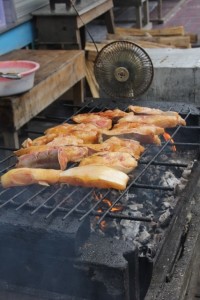 fish being grilled, note the little fan to blow the charcoal

Waking up, and dismantling the mosquito nets, we found we actually had a room with a view: a somewhat distorted view over the river. The village itself, by daylight, turned out a lot bigger than we had expected, all along board walks. The one that also contained all the shops was actually a dual carriage way, although the concept was totally ignored by the villagers. Houses were almost all made of wood, too, often nicely decorated and painted in jolly colours. The place also looked relatively clean, until we realized that all the rubbish is just being thrown off the walkways, in the water and the mud underneath. The river will take care of that, no?

Pleasant enough, Muara Muntai, but not so pleasant that we would stay a full day, we arranged a ces, a canoe with outboard engine, to take us to the next place on our list, apparently touristic Tanjung Isuy. 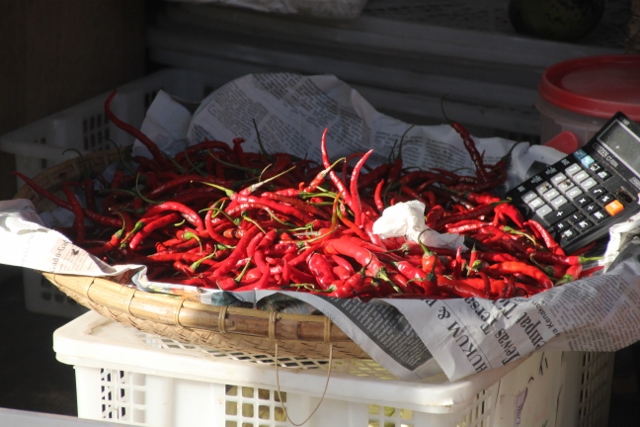 chilli peppers are everywhere in Indonesia 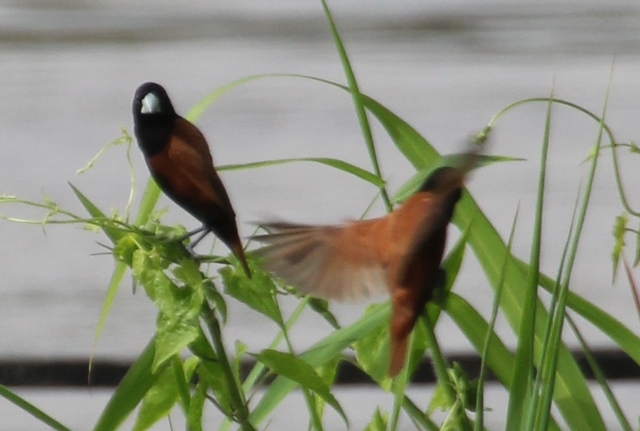 and some birds enjoying themselves along the river bank