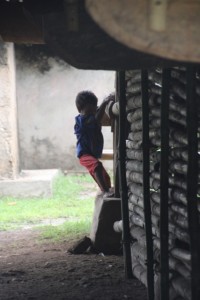 boy climbing down from his house in Wainyapu

The west of Sumba is another beautiful stronghold of traditional villages, with the tallest roofs on the island.

The southwestern-most area of Sumba is called the Kodi district. Many Sumbanese claim that the Kodi people are the original island inhabitants, on account of them being slightly darker coloured, and apparently strikingly handsome – which, I can testify, is not true for all of them. They are also a little more cocky, and a bit more forthright perhaps, than the average Sumbanese – which, I can testify, is at least true for some of them.

To get to Kodi we have engaged our trusted guide and driver again, comfort trumping adventure in the last days of our trip. We drive for an hour or so – distances are small, here –  through well-wooded countryside, initially still adorned by some old, mossy stone tombs along the road, but soon devoid from the traditional villages that have dominated the Waikabubak area. People are Christian, more churches appear, collective cemeteries without the outsized tombs become the norm. And still, the underlying tradition is never far away. Tombs may have a big cross on top, instead of the carvings, but often a buffalo horn is also adorning the tomb, just to make sure. Villages may not have tall roofs anymore, and may include stone houses, and wooden houses with tin roofs, but they are still laid out with two rows of houses facing each other, and a few tombs have slipped into the centre. There is also often a communal house, with benches on the verandah – more often than not with people, too, who don’t seem to have a lot to do, or any intention to start doing something soon. The churches become more and more garish, not as monstrous as in the Minahasa area around Manado perhaps, but still, quite oversized given their humble surroundings. Occasionally, a modern house, stone or cement, perhaps even a second floor, coloured tin roof – obviously a rich, important family – will have a huge tomb in the front garden, with crosses, Jesus-image, the whole lot, decorated with bathroom tiles and plastic flowers, the whole lot, and covered by a traditional, conical roof; corrugated tin, but still, tradition is lingering just below the surface. 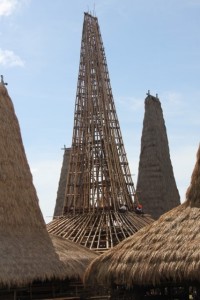 tallest roof in Sumba, once finished, in Ratenggaro 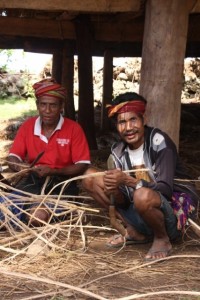 splitting the bamboo, to provide rope for construction – no nails! 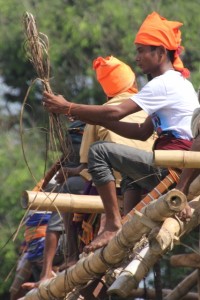 and building the roof 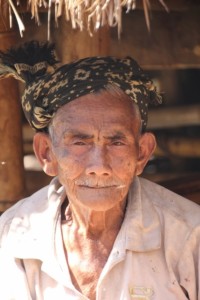 not everybody needs to be involved 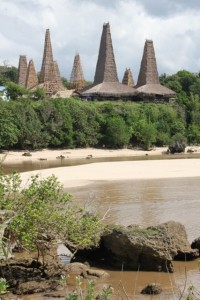 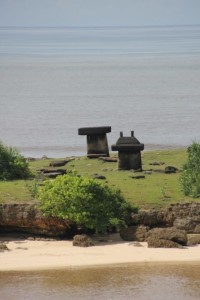 Ratenggaro tombs outside the village 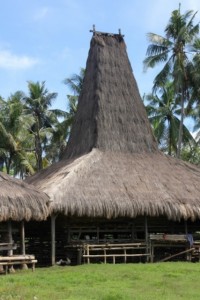 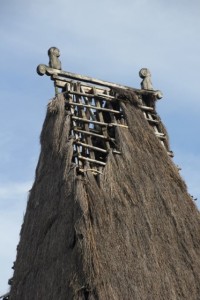 roof in Kampung Rangabaki, in need of repair 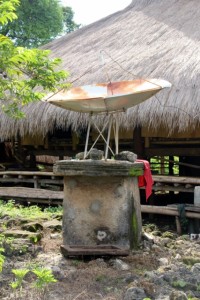 tombs are being used efficiently 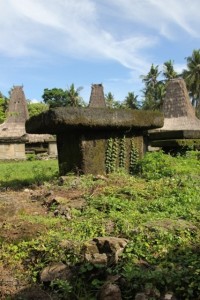 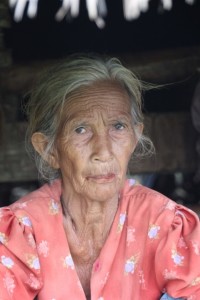 one of the village ladies 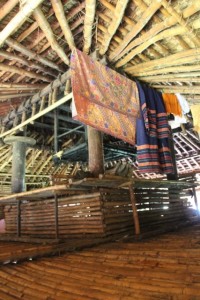 the structure of a traditional house, in Wainyapu 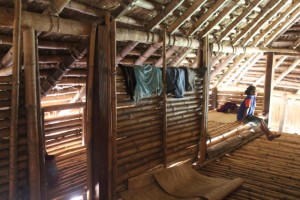 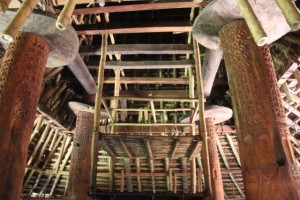 and four enormous, carved poles that form the basis of the house 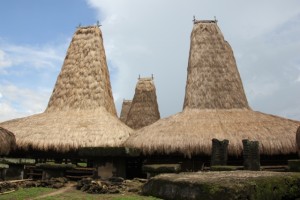 one of the Wainyapu village clans 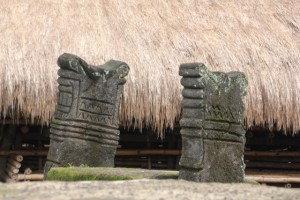 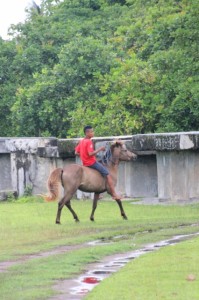 The Kodi district itself is all traditional villages again, with even taller houses than before. The villagers in Ratenggaro claim to be building the tallest of all, 22 meters high; indeed the not-yet-covered roof beats all the surrounding houses. Lots of people are involved, some splitting the bamboo into thin strips to tie beams, others building the roof construction – but there are still plenty of people around to show us their artefacts, and ikat. The village does well, obviously, which is expressed by the number of empty tombs outside. Unlike elsewhere on the island, where a tomb is only started once somebody has died, here they say that as long as they have money, they will build tombs, just to be prepared. They are well prepared!

Part of Ratenggaro’s attraction is its location, along a broad river, close to the beach. From the beach the village is even more impressive. Some tombs, presumably of important people, have been erected here, in isolation rather than in the village center or the cemetery outside.

Wainyapu is just across the river from Ratenggaro, but high water forces us to drive around, and approach the village from the other side. It is interesting in that this village is actually a collection of 12 clans that have put their houses in a circle, surrounding their tombs and an open space used for prayer, and for football. One of the villagers invites us inside, to have a look at the extraordinary structure, a tall house built without any nails or screws, just wood, bamboo and vines. There is a fireplace inside, under the tall roof, and some rooms have even been constructed, but the house is essentially nothing more than one big communal floor with a roof. 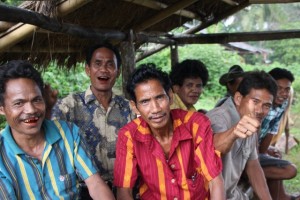 men sheltering from the rain – or maybe they were here long before, and long after the rain stopped 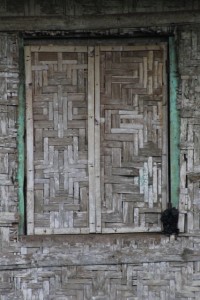 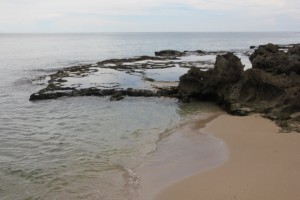 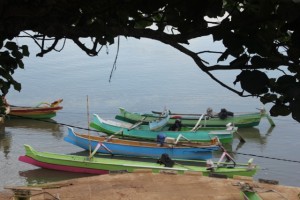 the fishing fleet of Pero 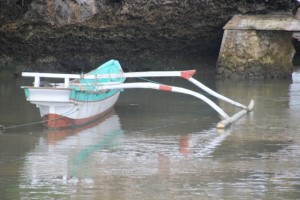 The Kodi area is apparently also a surfer’s favourite, but not in December. We end up in the small Muslim settlement of Pero, with beach and surf, and sharp coral limestones. Pero is also a small fishing village. The Sumbanese are scared of the sea, and are traditionally no fishermen, leaving this to people from elsewhere, like the Bugis from Sulawesi, who have established themselves along the coast. The colourful fishing boats are a welcome change for the predominantly brown and grey of thatched roofs and tombs.

next: the last location, Waitabula