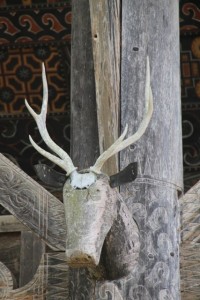 decoration on the pole of a traditional house

A walk in the mountains north of Mamasa, to Taupe and Loko, provides brilliant views and lots of traditional houses.

First things first: the Mamasa Valley is of outstanding beauty, is sparsely populated, and allows for innumerable longer and shorter walks to hilltop villages that have been adorned with traditional houses – rumah adat in Bahasa Indonesia. Given the village locations, we opted for the shorter walks. 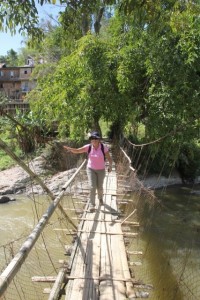 At a relatively early hour – delayed by a change of hotels, and the destruction, to provide access, and subsequent repair of our new room’s lock – we set off for the village of Loko, northwest of Mamasa. Glad we had been so smart to engage a guide, this time, because on our own we would never have found the way. We crossed the Sungai Mamasa, the Mamasa River, by way of a rather flimsy suspension bridge, best to be tackled one by one instead of all together, and after a short track through the rice paddies, we started to climb, along a completely deserted track. Every corner provided yet better views of the rice padis below along the river, and in each and every narrow valley where people could create the slightest flat area. Initially, we walk through fast-growing pine forest, planted to provide for wood, but further up the flora changes into jungle. But best was the silence, no motorbikes – no noise from shortened exhaust pipes that provide a perceived boost to the macho-feeling of young male with a testosterone surplus (Mamasa, and every other town in Indonesia, has many such young males). 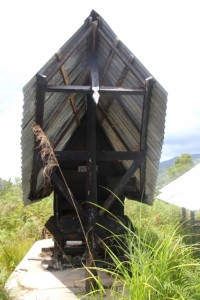 and one of the graves, in the form of a miniature house 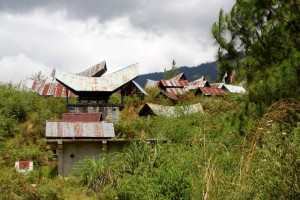 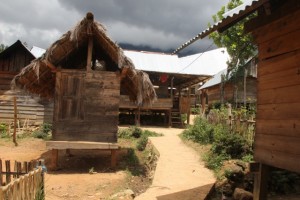 the entrance to Taupe village

Just outside the first village, Taupe, we encountered the local cemetery, spread over two hills above the road. Burial is extremely important in this area, which combines Christianity with lots of local traditions and believes. Graves are lined up in the same direction, and many are covered with a corrugated iron-roof, under which offerings of cigarettes and bottles, and sometimes whole bags with I-don’t-know-what have been placed. When I climb up to take a closer look, one of the roofs, loose at one side, rattles in the wind; it really sounded as if somebody wanted to escape from there, and the look on the face of our guide was priceless. 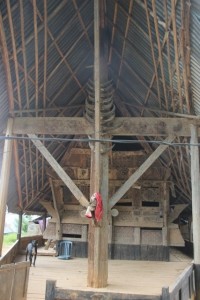 under the cover of a traditional house in Taupe 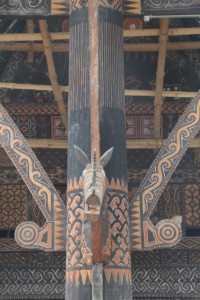 the support pole is extensively decorated 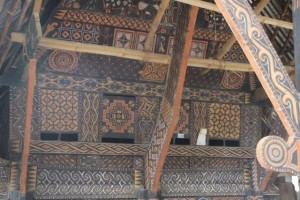 the front of the house is also decorated 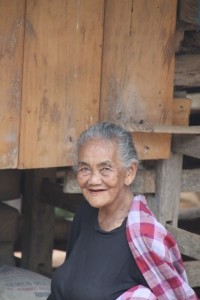 this Taupe lady has seen it all before 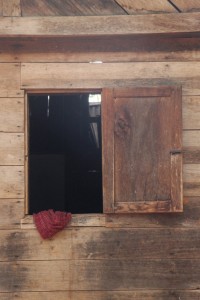 a window in a traditional house

Taupe itself provided us with the first good look at the traditional houses, of which there were a few in the village. A rumah adat is a long wooden construction with tall poles in the front and the back, supporting a roof in the shape of a saddle, overhanging on both sides. Thatched roofs have been replaced by corrugated iron a long time ago, it seems. Opposite each house is a rice barn, a raised smaller wooden house without windows, above a bamboo platform – often replaced by concrete, these days. Apparently, the houses represented class, a carved one being of nobility, a black one, without carvings, being middle class, and the simple, unpainted ones for the lower classes. Wealth is further demonstrated by the number of buffalo horns attached to the front pole, the remnants of funeral celebrations. The more horns, the more important the deceased was, and thus the more buffalos needed to be slaughtered during the burial ceremony. Of course, the older the house, the more burials it has seen, which also adds to the number of horns.

Many people have abandoned the traditional house for a more efficient, and no doubt more cost-effective structure, but it is good to see that there are still quite a few houses around, and that many of them are well maintained, keeping a tradition alive – although not to the extent of Tana Toraja, the neighbouring area. 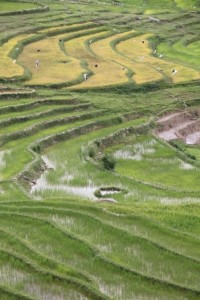 the view from Taupe, rice paddies 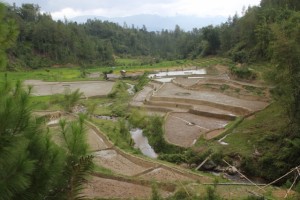 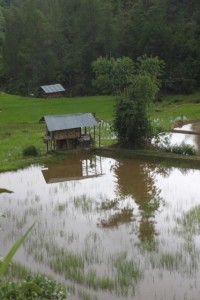 on the approach of Loko

From Taupe we followed a good, broad track, only to be summoned by our guide to leave this path for a steep, slippery scramble down the slope towards the bottom of the valley, where we made our way across rice padis again, and wading through a shallow river too broad to jump, before we were forced up another steep slope, to the village of Ne’ke. Once again, without guide we would have been completely lost. From Ne’ke it was a somewhat easier walk, mostly flat, to Loko.

When we arrived in Loko, the rainy season decided to arrive, too. With buckets. Which somewhat reduced the enthusiasm for exploring the many traditional houses here; instead, we took shelter under one of the rice barns, where the owner of the opposite house served us strong coffee, precisely what our soaked bodies needed. Our guide refused: she was from another village, and she had been told by her parents, who knew from their parents, that the people from Loko applied some form of magic to the drinks they serve outsiders. Really. College degree, fluent in English, nine years working experience in Bali. But scared of inter-village rivalry expressed through magic potions. 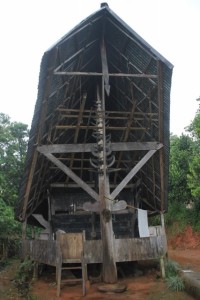 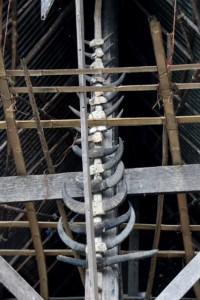 decorated with the horns of slaugthered buffalos 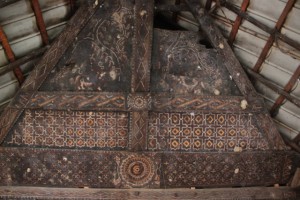 With the rain not showing any intention to stop, we enjoyed the absolutely splendid view from Loko, high above the rice-paddied valley floor below, through a bit of a haze, and made our way down to Mamasa, and into the hot sulphur spring next to our hotel. Brilliant day!

but there is more to the Valley! 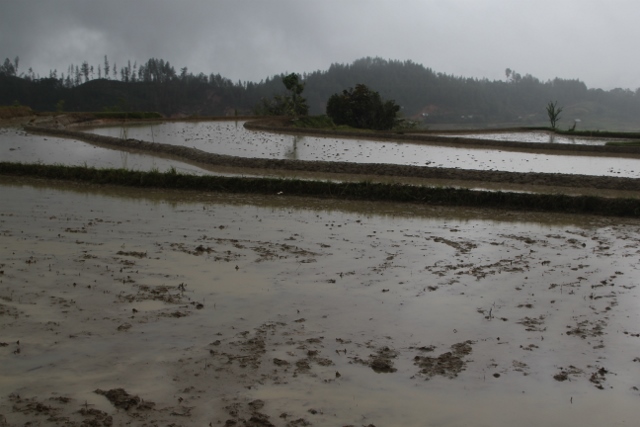 much of these dark clouds had emptied themselves already, but this water is actually for the rice paddies, with new plants

One Response to 36. Mamasa Valley