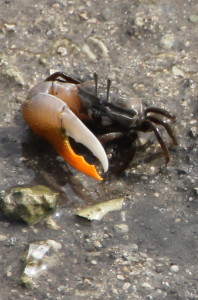 a genuine one-armed crab, they do still exist!

So we made it back home again. Last days were suitably relaxed: from Sumba back to Bali to pick up some left luggage, and enjoy one last day of sun, sand, sea and swimming pool – expertly killed by 24 hours of rain -, then to Jakarta for one last day of shopping and associated iced cappuccinos – expertly achieved to the extent that we now needed an extra bag to travel home -, and then the long haul to The Netherlands.

Looking back at three months Indonesia, there are a few observations that come to mind. Firstly, on earlier occasions I had not appreciated the enormous variety that exists within the country, the differences between islands. People in Java are different from those in Sulawesi or Kalimantan, let alone Sumba. And even within islands, within Java, within Sulawesi, we found people different, in the way they interact with each other, and with us, and not only because of different religions. Yet there are plenty of similarities, too. Almost everywhere people are friendly, and helpful – perhaps with the exception of the most touristic areas, where the approach is, understandably, more businesslike. People walk you to the bus, to make sure you get on the right one, on occasion they even paid, totally unnecessarily, our bus fares for us. People came from behind the counter to walk me to the right shop, if they didn’t have what I was looking for. People would stop their car to ask what we were looking for, and then offer to drop us there, just for the opportunity to practice a bit of English.

Also almost everywhere, people adopt, let’s say, a rather less-than-optimal approach to productivity. If you can make a little money without doing much, than there is no reason to do more. For instance, most hotels, even the more upmarket ones, are rather poorly maintained, there is always something malfunctioning somewhere – again, with the exception of the touristic areas, Bali especially, where more investment and more competition have resulted in a superior hotel scene; so it is possible, it just takes a little more effort. Where the Thai, the Cambodians, the Vietnamese are entrepreneurial, and work hard to get ahead in life, the Indonesians often displays an unbelievable lack of ambition. Negotiating is a way of life, in Indonesia, yet we have been in several situations where a seller just didn’t budge. Perhaps it is pride – I have set my price and I am not going to give in to the foreigner – , even if the seller is ultimately left with no deal. But often I had the impression it was just indifference, in many shops we entered they couldn’t care less whether they make a sale or not, continuing talking to the neighbor seemed more important. No wonder the economy is largely driven by Chinese. 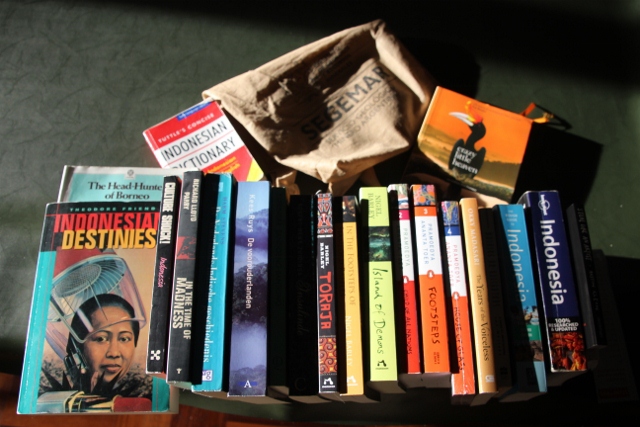 we do not exactly travel light: the library at the bottom of the suitcase, half of which we carried from home and the other half purchased locally

Next question is how much of the Dutch colonial era can be traced back in present day Indonesia. I am sure there exist plenty of scholarly studies on this subject, and my contribution here is no more than shooting from the hip. One of the books I read claimed that, in fact, there is nothing left, and my two observations above – the friendliness of the Indonesian, as well as his lack of ambition – seem to confirm this: both treats one cannot accuse the Dutch of, in general. Yet, I think there are still quite a few traces of Dutch left in Indonesia. One is, of course, the country itself, a completely artificial grouping of islands and part-islands, entirely the result of colonial history. Sumatra, really, would culturally fit much better with Malaysia, and there is no real justification to separate Borneo in an Indonesian and Malaysian part. Likewise, the Lesser Sunda islands have little in common with Java, and there seems to be no other reason for incorporating Papua – Dutch New Guinea – in Indonesia than its common former colonial power.

There are more traces of the Dutch left. And I am not so much talking about remnants of Dutch buildings, of which there are a few, but mostly not particularly impressive – nothing compared to French and British architecture in other parts of South East Asia. Some of the Indonesian refurbishment of those buildings hasn’t helped, either. The Indonesian language has a lot of Dutch words left, some obviously for technological developments that the Indonesian language at the time had no words for – wastafel (washing basin), koelkas (fridge), knalpot (exhaust pipe) -, others, like wortel (carrot) or buncis (in Dutch boontjes, which means beans), perhaps because they did not originally exist in Indonesia? The Dutch introduced other crops, too, of course, like coffee, and other cash crops, now all important export products. The funniest contribution to language, however, was explained to me by a Yogjakartan politician, who claimed that electricity poles are called anems, after the text on the small metal plates that used to be attached to those poles: ANEM, for Algemene Nederlandsche Energie Maatschappij – general Dutch electricity company -, the owner of the poles (in all honesty, I have subsequently tested this with some Indonesian friends, but they weren’t aware of this particular terminology).

But the best prove of lasting colonial influence is that the only two nations that eat chocolate sprinkle, the stuff used to decorate cakes, on their bread, are The Netherlands and Indonesia, and I am pretty sure this is not an Indonesian invention. Pity those nations that have not been colonized by the Dutch!

Looking back on the trip, ours was a fabulous journey, with lots of different highlights, whether old temples, pristine beaches, steamy jungles, or even steamier volcanoes. A great variety of traditional houses, a great variety of burial techniques. A great variety of fish, fish markets, fishing boats and fishing villages. To top it all, theonearmedcrab saw lots of different crabs, and amongst them a genuinely one-armed crab: the port of Waingapu was teeming with them! Many different markets, too, from buffalos and pigs to dogs and snakes, not necessarily all pretty, but definitely interesting. Many forms of transport. And above all, many different people.

I enjoyed every moment of it – or, more realistically, almost every moment. And I enjoyed writing about it – even though not every entry was of the highest standard, not every entry crisp and to the point, I know -, and illustrating the writings with some of the photos I took – even though I often couldn’t choose, and ended up posting far too many pictures. And most of all I appreciated you reading some of it, and posting the occasional comment, just so as to let me know that I have not been writing this blog only for myself. 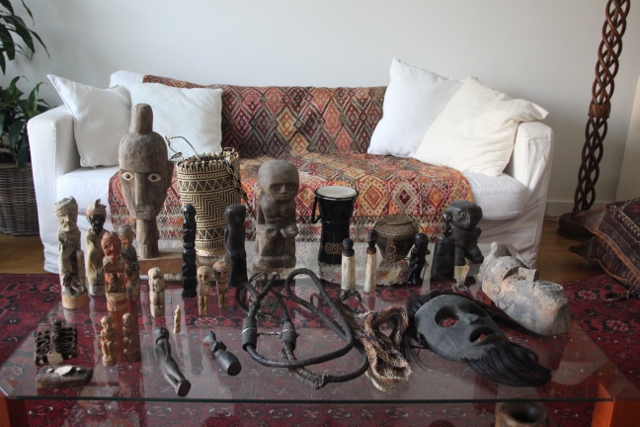 and even worse, the contribution to our collection of artefacts, from this one trip only; no wonder we need extra bags