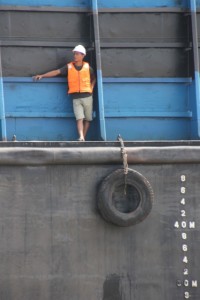 sailor on one of the coal barges on the Mahakam River

The lower part of the Mahakam River is an entertaining stretch of river, densely populated and dominated by extractive industries and busy shipping. 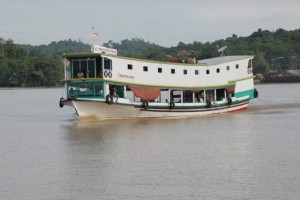 The kapal baisa to Muara Muntai left Samarinda early. Five minutes early. These are large boats, some 4 meter wide and maybe 30-40 meter long double deckers. Below is a sitting area – sitting on the floor -, where also the motorbikes are parked and the freight is stored. On the upper deck are bunks on two sides, perpendicular to the length of the boat, with a narrow passage in between, very low – especially for tall Westerners! The bunks have thin mattresses for those who travel through the night, or just hang around during the day; not us, for most of the time we occupied the tiny front deck, with full view over the river ahead of us. At the back of the boat is a small restaurant, where a lady whips up excellent meals, and tea and coffee, and at the back below are the toilets, essentially a hole in a wooden plank. 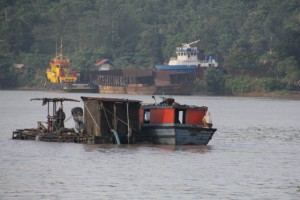 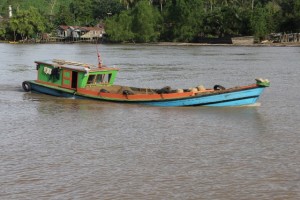 boat loaded with sand from the river

The first part of the river, all the way to Tanggerong and beyond, is very much industrialised, both on the water and on the banks. Numerous small dredging platforms are moored in the river, pumping up sand that is loaded in small barges, no doubt to be sold later. Seems pretty hard work, which proves Bock’s observation that all the natives are lazy wrong – Bock was rather negative where it concerns the local people. 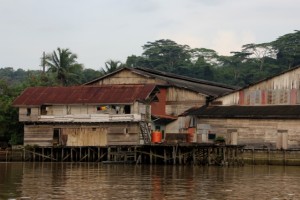 houses along the Mahakam 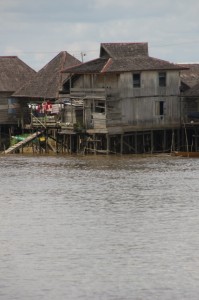 another wooden house on stilts, a quite unusual and beautiful design 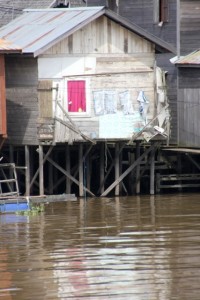 coal barges and a towing boat alongside 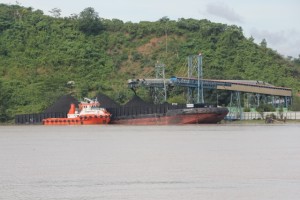 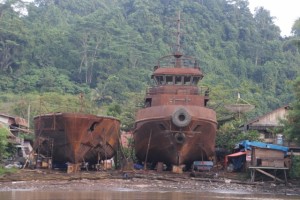 what I initially took as a scrap yard, is actually a shipyard 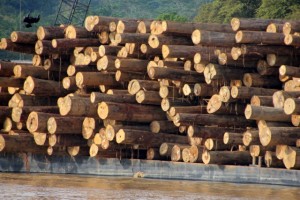 logs stacked on the river bank

Onshore, the left bank (south bank), which is  also the side of the road to Tanggerong, is almost continuously built up with houses, floating and on stilts, interspersed with ship yards and coal mines, or rather, coal loading stations, which consist of conveyor belts that run all the way inland to the mines, beyond sight. The loading stations fill huge barges, easily the size of a sports hall, which are subsequently pulled down river by often brightly-coloured towing boats, a stark contrast with the black coal. The towing boats and barges are constructed in the shipyards, although the first time I saw this, I thought that I was looking at an old, rusted remnant of a towing boat: unfished, unpainted, they look rather less attractive. The other business is that of hardwood: the Bornean forest that is being emptied is stacked up along the banks of the river.

Tanggerong announces itself through the presence of some bigger buildings, but for the rest, not much changes in the scenery. There is also more build-up on the other bank now, including an enormous stadium, and small ferries ply in between, carrying motorbikes and cars. 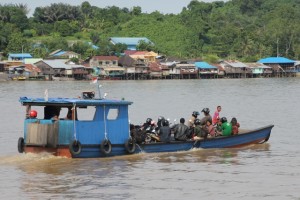 a small ferry taking motorbikes, and their helmets, to the other side

In the days of Carl Bock Tanggerong was the seat of the Sultan of Kutai, who ruled over large parts of the Mahakam River. Then, as now, Tanggerong was a smaller version of Samarinda, according to Bock, with houses “most of them dirty, both inside and outside, and  round of them (…) equally dirty children”. The boat made a brief stop here; even though things may have changed, we had no intention getting off.

we continued, instead, to Muara Muntai 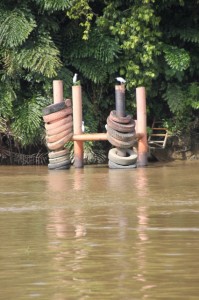 when there are no coal barges, the herons come down 5 Responses to 54. the Lower Mahakam River