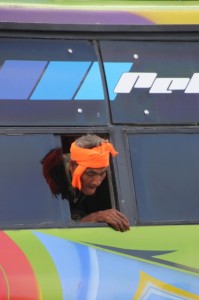 one of our fellow passengers, disposing of betelnut juice

A relatively uneventful bus journey across half of the island of Sumba.

Waika-where? Waikabubak, the second-largest town in Sumba, after Waingapu. And I could continue for a while, we passed Waibukal, another town, and there is Waitabula, where we will end up later. In fact, quite amazing that we managed to get the right bus and ended up in Waikabubak and not one of the other Wai’s (wai, apparently, means water, or spring, the obvious place to establish a town, never mind the confusion for the foreigner). the bus, not your average type

As I said, we managed to get the right bus, which, however, was a bit of a hit-and-miss. The owner of our guesthouse had arranged for a public bus to come and pick us up at the guest house at 7 am, but by 7.30 there was still no bus, which worried the wife of the owner – funnily, I would not have worried for another hour, or so, this also being Indonesia. So she suggested we go to the bus station, instead, and even offered to bring us there by motorbike, an offer we declined because of all our luggage, we rather walked. Only to be spotted by another bus, cruising town for additional passengers, three minutes into our walk, long before we arrived at the station. And which was going to Waikabubak, it sounded – although we would not have picked up the difference between Waikabubak and Waitabula and Waibukal. Luckily, it did, indeed. the bare hills, outside Waingapu The drive, covering about half the width of the island, is quite attractive. The landscape is dominated by rolling hills, mostly devoid of trees, but covered with grass. Not like what you would expect of a tropical island, more like the Yorkshire Moors – except for the climate, of course. I assume that originally the hills were tree-covered, but that these have mostly been chopped, for firewood and building material. Yet, trees do grow, and have been planted, together with bamboo, to fence off small plots of land, and the gardens around houses, all very neat, and also kept relatively clean. The island here is not very densely populated, whole parts are empty, and are not cultivated – if that would be an option at all, because many of the hills do not seem to have a lot of top soil left. Only near the larger towns are rice paddies evident, and some other agriculture. (Come to think of it, vegetable are indeed scarce, and much of the food served in the small warungs, the restaurants, is rice with a small piece of meat, and tempe or tofu, no greens.) The rest of the countryside is given over to skinny cows, water buffalos, goats, and horses – another unusual sight in Indonesia. Horses may have been imported by the Portuguese, and have ever since been part of Sumba culture, used for transport, for dowry, but more importantly, for the Pasola, an annual mock-battle event in which the young men take part, and prove themselves. For the rest of the year, the horses are just wandering around, it seems, in groups, unguarded; although in some towns horses are kept, too, groomed and well taken care of. traditional houses, tin-roofed, sticking out of the tree cover a canoe left under a bridge

The bus dropped us in front of our hotel in Waikabubak, just before it started raining. Which it kept doing for the rest of the day.