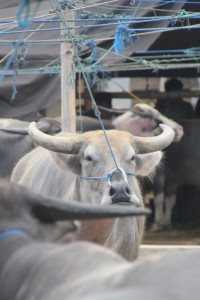 buffalo at the Bole market in Rantepao

Tana Toraja’s cultural capital has a lot to offer, like a unique buffalo market and plenty of outsized traditional houses, so-called tongkonans.

Rantepao is the biggest town in Tana Toraja – land of the Toraja people. This is where the hotels are, the travel companies, the long distance bus companies, the tourist guides, in short, all the infrastructure that was lacking in Mamasa. Tana Toraja is fully prepared for the tourists. And it shows in the people, who are, unusually for Indonesia, indifferent, not particularly helpful, or forthcoming with information. The tour guides are the worst. They will spot you, probably smell you, from far away, and besiege the car as soon as it stops near a hotel. They are a strange lot, all look like 1970s hippies, long hair and the lot – although walking on sandals equally fits 1970s hippies and Indonesians -, and we recognise them just as they recognize us. Somehow, they are also very assertive, in an aggressive and confronting way, for instance if you tell them that you are not interested in their services, and very sensitive about jokes, or anything they perceive is being said to them – equally un-Indonesian. 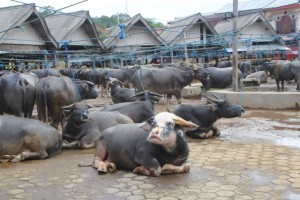 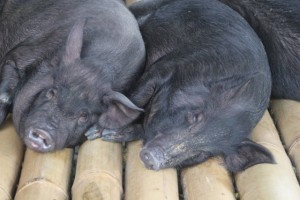 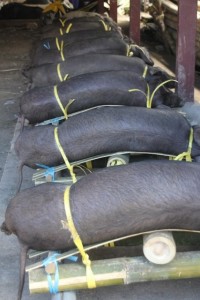 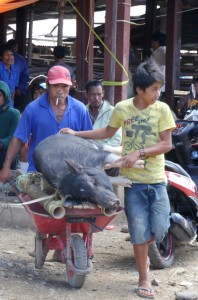 any form of transport will do 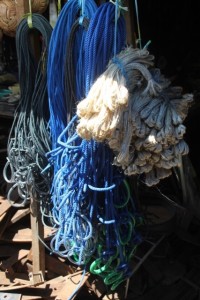 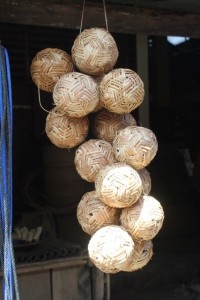 and these are bamboo footballs

Every six days there is market in Rantepao – why they don’t settle for a weekly schedule beats me -, and the day we arrived was such a day. So off to Bole, the northern suburb and the location of the market, mainly to view the spectacle of hundreds of buffalos for sale, many tied up to a rope overhead; to make sure they don’t lie down? I don’t know, some do anyhow. A full-grown buffalo costs around 16 million Rupiahs, more than a thousand Euros. The market had been going on for the whole day already, and it showed, especially on the ground, where the buffalos had left their mark. Glad we were not wearing slippers. On the side, large cots contained lots of huge pigs, too, also part of the market process. Those sold – 2 million only, or less than a 100 dollars, a bargain, really – were being transported in many different ways, mostly tied up, and they were loudly protesting their fate. Animal rights, anybody? Not a pretty sight. 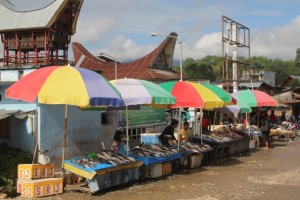 at least the fish stalls are a little more colourful, in front of the tongkonan structures 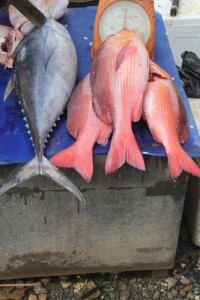 and even the fish is! 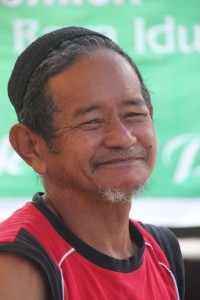 Rantepao itself has not much to offer, except for a comfortable hotel – and an internet connection -, which we thought was well deserved after the previous few days. But outside the center we do get our first glimpse of the Torajan houses, even more extravagant than what we had seen in Mamasa, and also far more numerous. Here, it is obviously a status symbol to have a traditional house – here called tongkonan, and equally positioned opposite one or more rice barns, like in Mamasa -, it reflects wealth. Many tongkonans are new, and many modern houses have a traditional roof extension in the form of a tongkonan, or a carved and painted gable, and people value their cultural heritage. Except that, here too, the thatched roofs have long been replaced by corrugated iron. 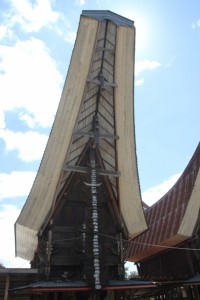 tongkonan in a Rantepao suburb 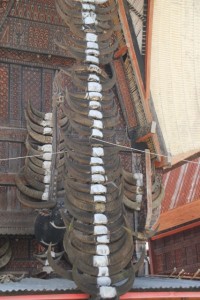 lots of buffalo horns, lots of past funerals 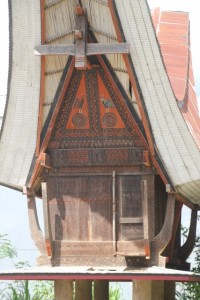 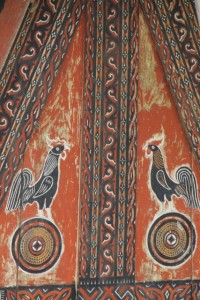 Torajan culture centers around ceremonies, of which the burial ceremony is the most important. It is said that the Torajans work their entire lives only to send their dead to the next world as comfortable as possible, and that includes a huge farewell, with as many guests as possible – number of guests indicates importance of the dead person -, who all have to be seated, which is why they are continuously building platforms for ceremonies everywhere, and who all have to be fed, for which buffalos and pigs need to be slaughtered. And the horns of those buffalos, they once again adorn the houses, so everybody can see how important the family is. 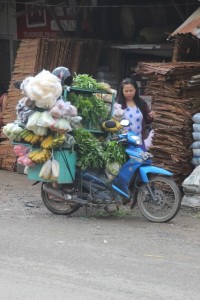 the mobile supermarket, coming to you

Not being too keen on the slaughtering process, we didn’t attend a ceremony, but we did spend a few days around Rantepao, to explore the villages, the graves, and the breathtaking scenery of Tana Toraja.