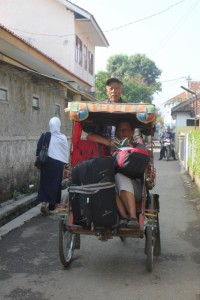 getting out of the hotel in Banjaran with our luggage

When I read about the Malabar Tea Estate, a plantation outside the town of Pengalengan, south of sprawling Bandung, I wanted to go. They have a guest house, so would be nice to stay there for a few days. And getting there, for us public transport experts, should be a piece of cake.

Talking to the hotel owner in Cimaja, we would require two bus changes, and her estimate of the time it would take was a little more than mine, so we decided to leave early. Next morning, 7.30 we waved down an Anghot (local slang for Bemo, which is a minibus – remember?) to the bus station in Palabuhanratu. We were lucky, because the bus, half full only, was about to depart. Only to linger around outside the bus station to pick up more passengers. You see, the schedule says he needs to depart the station at 8 am, but it says nothing about thereafter. However, comfortable enough seats, and air-conditioned. Not a big deal.

A little over two hours later we changed, in Sukabumi, to a bus to Bandung, that would drop us off  at a place called Cimahi, from where busses to Pengalengan would depart. Now were are talking business: luxury, Exekutive class, real soft seats. And we were lucky, because the bus, despite being almost empty, was about to depart…. We spent the next hour crawling slowly through the streets of Sukabumi, in the hope of more passengers. But never mind: comfortable seats, air-conditioner, not a big deal. That’s part of the travel experience. And that the Exekutive bus kept on picking up, and dropping off passengers along the way, that too.

At about two in the afternoon we were near Cimahi. And so were a whole lot of other cars and trucks and minibuses and motorbikes. Cimahi really is the outskirts of Bandung, the place we had tried to avoid because of its horrendous traffic. In the next hour we progressed – no kidding – about one kilometer, half of it thanks to the bus driver bribing a guard to open a gate which allowed us to bypass the main road for a bit, only to push ourselves back into the traffic jam once again 500 m further down. By now everybody in the bus knew we had to go to Pengalengan. Another bus passenger, a young girl, said she also needed to go there – or so we understood -, and we got off with her, to change to a waiting minibus. How long to Pengalengan? “One hour”. Piece of cake. 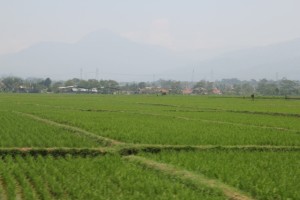 The girl spent the next hour calling and texting, and then wrote down a list of destinations we needed to go to, to change to further minibuses. It turned out that she was in fact not going all the way to Pengalengan, but to Cimahi. Which was not where we had been dropped by the bus driver, the bus was never going to go there in the first place. And one hour, that was to Cimahi only. Anyhow, she was extremely nice, of course, sorting all of this out for us, she then even paid our ticket for us, despite our protestations, and she put us on the next minibus. Asking around, how long to Pengalengan? “Two hours”. Right.

After another hour, and another change, we began to realize that we would not make it anymore, to Pengalengan. After dark, the minibuses that plow up and down between towns stop operating, and in any case, you don’t want to be on these roads, after dark. So we asked around among the passengers about hotel options. A little difficult, as nobody spoke English, but then a young man and his girlfriend joined the bemo, and confidently asked, in English, what we needed. Ahh, how lucky we were! Only to learn that with this one sentence he had exhausted his English language capacity. His girlfriend did a little better, managed to ask “What is your name?” and “Are you on holiday?”, but that was it. With hands and feet, and phrasebook, we succeeded in getting our point across to the other passengers, who then informed the driver, who, after everybody left at the end of the route, dropped us at an hotel in a small town called Banjaran. 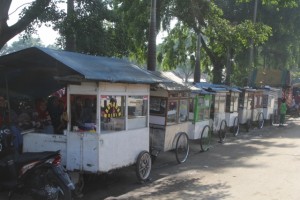 To cut an already long story short, the hotel was pretty basic, even to our standards. Next day, we chartered a whole minibus, no doubt paying way over the odds (I estimate approximately 100 single trips), and instructed the driver to bring us directly to the Malabar Tea Estate, what he did in a little over an hour. Not so difficult, after all.

postscript: I checked the distances, and Pelabuhan Ratu to Banjaran is 150 km, according to Googlemaps, of which the last part – our close to three hour minibus experience – was no less than 25 km, less than 10 km per hour! On to Malabar Tea Estate is another 30 km, which with a dedicated bemo still took us more than an hour!

next: the Malabar Tea Estate

2 Responses to 10. the journey