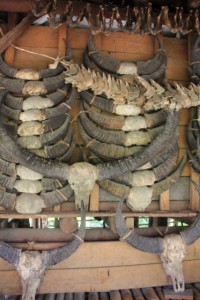 An unusual island in the Indonesian archipelago.

Sumba is one of the poorest islands of the Indonesian archipelago. And it has always been poor, which is why it never received much attention from the outside world. Nominally under various Indonesian empires in the 14th and 15th Century, no outside forces really interfered with the indigenous clan structure, determined by small-scale kings from fortified hill-top villages who fought ferocious wars between each other, complete with headhunting and cannibalism. The Portuguese arrived in 1522, and left again. The Dutch didn’t take note until well into the 19th Century, when they started to appreciate the value of sandal wood, which grew in abundance on the island – therefor better known as Sandalwood Island -, and which was chopped down in great quantities. In 1906 the Dutch decided to clamp down on the island, and invaded. As elsewhere in Indonesia, they subsequently set up a local administration through the existing power structure, maintaining the influence of the elite. With Indonesian independence, the Indonesian government did exactly the same, a strategy that came to a blow in 1998 – a time everywhere in Indonesia things came to a blow – when less advantaged people went on a riots and killing spray, especially in Waikabubak in the west of the island; the old times of headhunting were back, albeit briefly. 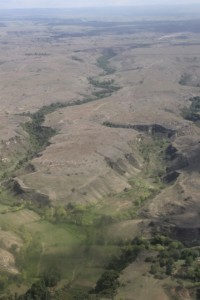 Sumba from the air, grassy hills and trees in the river valleys 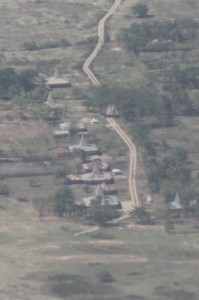 even from the air, the pointed roofs are obvious

The overall lack of interest in Sumba has resulted in the preservation of a unique culture, largely based on animist spirit beliefs. Although officially about 2/3rd of the population is Christian, in most cases this is just a thin veneer, under which the Marapu religion manifests itself: a belief in eternal afterlife, from which ancestors continue to influence happenings on earth, and thus the importance of burials, to send them off into the spiritual world, and of ceremonies to keep the ancestors on one’s side. Ceremonies, including burials, we did not witness, but they usually come with plenty of animal sacrifice – spilled blood is good -, despite efforts by the government to limit this, a rather huge expense for poor people. 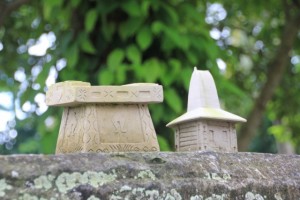 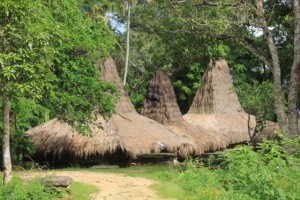 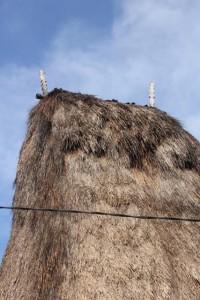 the roof has decorations on top, called “horns of the house” 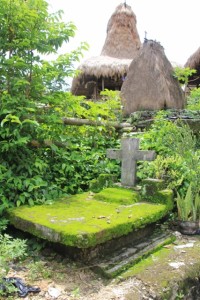 tombs may carry a cross, but for the rest are more Marapu religion-like

The day-to-day evidence of the Marapu way of life can be seen in huge tombs everywhere, those of important kings in the center of the village, others outside, at road junctions, or wherever there seems to be space; and in traditional houses, built on poles and with tall, conical roofs, closest to heaven, under which the spiritual tools are kept; as opposed to the earthly world on the raised house floor, and, literally, the animal world under the floor, in between the poles, where pigs and dogs and chicken roam freely. The houses are usually built in two rows facing each other, with the tombs, and several prayer areas, in between – not unlike some of the Ngada villages around Bajawa in neighbouring Flores. 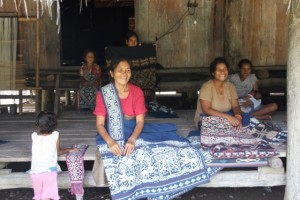 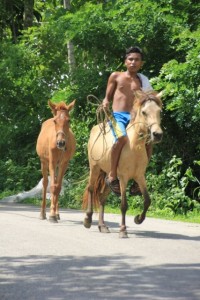 and in horses, a very un-Indonesian animal 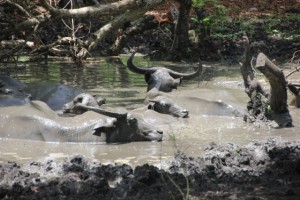 wealth is expressed in water buffalos

Sumba has other chracteristics, too. Again, like Flores, it produces ikan, an intricate weaving, the best pieces coloured with natural dyes. For the rest it doesn’t produce very much, although we wouldn’t be us if we would not have found a number of artefacts, in wood, in stone and in bone, to add to our collection. Wealth is measured in water buffalos, and , rather un-Indonesian, in horses – which are also an important part of the dowry, although increasingly this is substituted by a motorbike. Apparently, the dowry system is also stimulating cattle theft, by the braver, and import of women from other islands (where no dowry is expected), by the wiser. And it leaves many Sumbanese women unmarried. 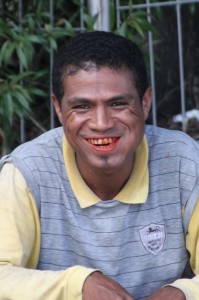 Of course, all of this is under threat. The practice of transmigration, bringing people from densely populated areas to where space is plentiful, introduces different cultures and different religions into Sumba. Tourism brings foreigners with strange habits – I read somewhere that the Sumbanese are “bewildered by foreigners either baking in the sun or riding the waves all day on a plastic plank” -, and habits experienced as offensive; after all, how would you feel if some camera-wielding stranger walks into your back garden and pushes his lens in your face? But mostly, of course, Sumba is not so isolated anymore, from the rest of the world, there is satellite TV in even the tiniest village, and internet, whilst still rare, will ultimately be available, too. But for as long as it lasts, this is still a unique place, with a unique culture, of which not many are left in the world. 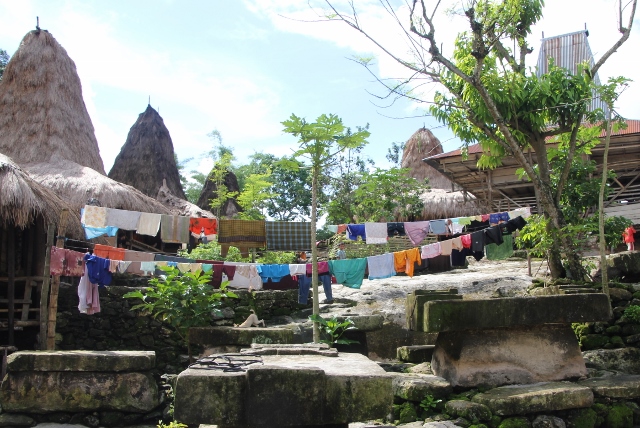 fortunately, laundry livens up the village scene somewhat; Indonesia, after all!

One Response to 64. Sumba