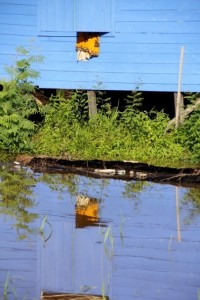 Another boardwalk town, non-descript stop along the Mahakam River.

To get back to the main river from Mancong and Tanjung Isuy our ces once again crosses part of the Danau Jampang, only to suddenly dive into the weeds to follow a for us invisible channel, equally suddenly ending in a narrow stream through a forest. This is obviously a connection with the Mahakam, as there is a fairly strong current against us, but even more challenging for the boat driver are the sharp bends in the stream, and not knowing what is on the other side – like other ces, for instance, we encounter quite a lot of traffic. The monkeys are also back, and so are some of the birds. A nice surprise, and an enchanting one hour until we reach Muara Pahu. 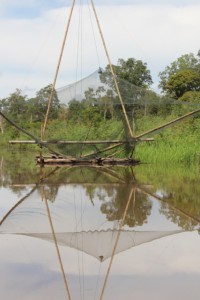 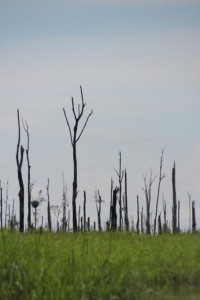 some part of the forest burnt down recently 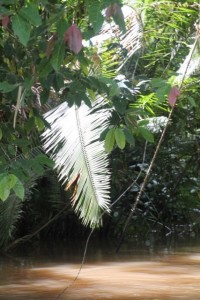 back in the jungle, on the way to Muara Pahu 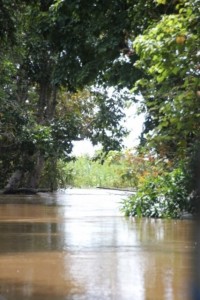 narrow channel back towards the Mahakam River

The water is indeed high, so high that the ces cannot pass under the bridge to reach the dock, and drops us outside the village instead. Which requires us to change to flip-flop mode, slippers, and wade up to our knees through the water. Never a dull moment. 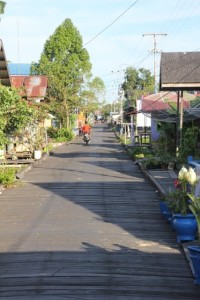 the only street, board walk, in Muara Paho 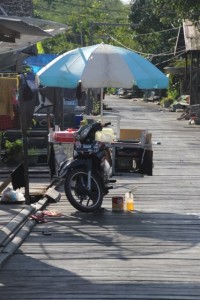 and one of the sellers, parked on the only street 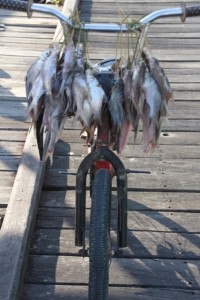 catch of the day, delivered by bicycle 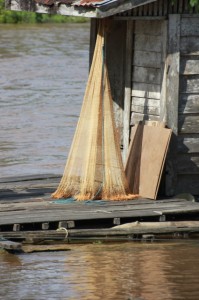 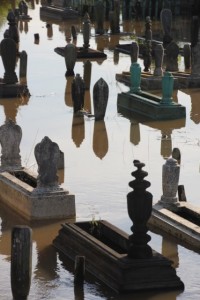 high water, even the cemetery has been inundated

Muara Pahu is not more than one street, or rather, one long board walk, along and at the mouth of the Pahu River, another tributary of the Mahakam. Shops, a wooden mosque, some restaurants, and houses, all along the board walk, some of the parts of which are loose, to the effect that even I, walking alone, emulate the sound of a tank passing.

The guest house is the same basic affair, room with a bed and a fan, and shared bathroom, but the place happens to be next to an internet café – populated with all 6-10 year olds behind large screens, playing games – from which we get the wifi password. Quite unexpectedly, internet along the Mahakam River! (with previous century connection speed, but never mind).

Carl Bock used the same route via the Jempung Lake, during his 1879 expedition, but he didn’t go further upstream the Mahakam than Muara Pahu, from where he followed the Pahu River instead, southwards. Muara Pahu in his days was the furthest place Malay people had settled, indicating a certain civilization and safety. Anything further inland was entirely Dayak populated, and thus suspect and dangerous on account of head-hunting practices and cannibalism. Times have changed, I hope! 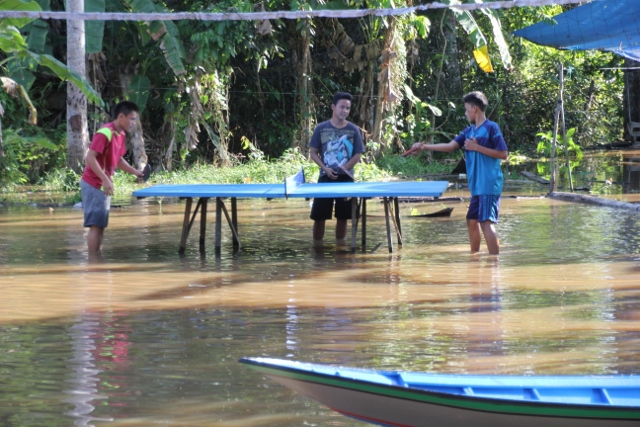 a laundry country, I have said it so often