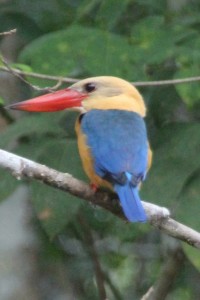 kingfishers don’t come nicer than this

Scenic Dayak village at the end of a beautiful and lively jungle river, somewhat marred by rubbish.

The Sungai Ohong – Ohong River – is a tributary of the Mahakam River, which empties in the Danau Jempang. It is also one of the most spectacular sceneries of our Mahakam River trip. 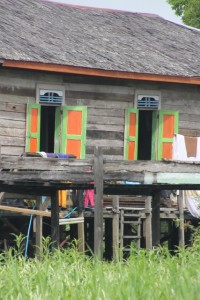 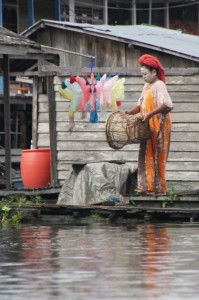 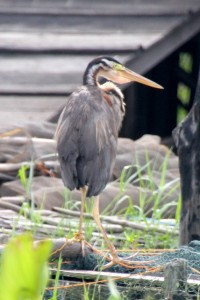 a heron, apparently used by the fishermen 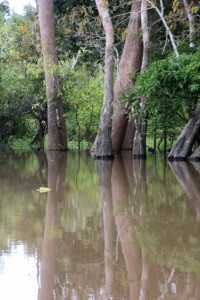 trees, partly under water, along the Ohong river 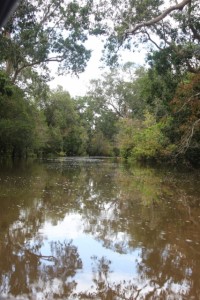 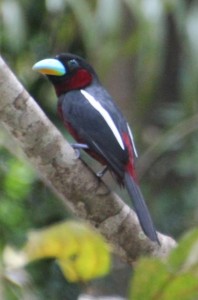 the blue and grey bird I was talking about

A short ride from Tanjung Issuy is Muara Ohong, a village from where we leave the lake, and enter a fairly narrow channel that turns out to be the Ohong River. Initially, the banks are covered with low trees and reeds, the water with weeds through which our ces finds its way. Soon, however, the trees grow taller, the river narrower, and we are cruising through what feels like a tunnel, the trees overhead occasionally closing in. 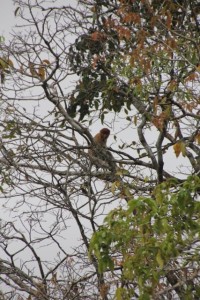 monkeys in the tree 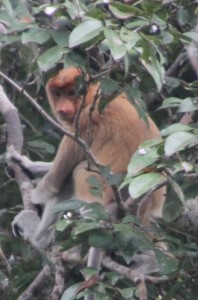 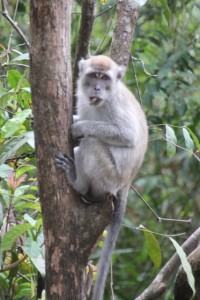 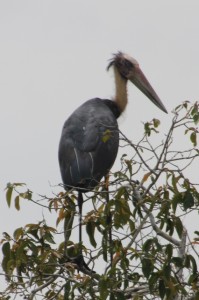 large bird, unknown to me, and not particularly pretty

Kingfishers, brilliantly coloured blue and yellow, zap across the water, disturbed by our presence. Another beautiful bird, blue and white with a red chest and a light blue beak, is rarer, and more elusive. In between, red proboscis monkeys and the good old black macaques move through the trees – easily identified when whole branches violently move from an overkill of monkeys landing on top of them. High above a hornbill, and several other large birds which we don’t recognize, fly along the top of the forest, out of reach of our cameras. This is also the Indiana Jones-feeling. Fabulous. 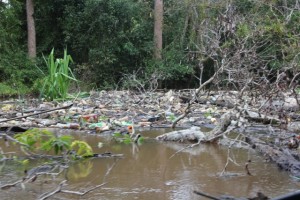 rubbish accumulating in the river

and rubbish being collected behind the bridges 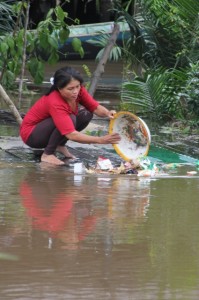 and this is how it gets into the water: woman emptying the rubbish bin in Mancong 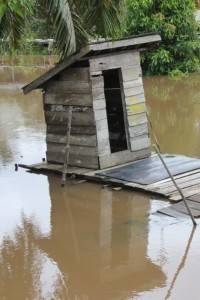 Except that in every bend, and at every whirlpool, rubbish has collected, plastic bottles, paper boxes, bags, anything really. At some of the villages we pass, the water under the bridges is clogged with rubbish, mixed with forest debris. Everybody just dumps whatever they don’t need anymore in the water; the water will take care of it. Which it doesn’t of course, but that doesn’t seem to bother the people. They seem to be quite at ease with living in between their own waste. Never mind that they wash their clothes, and themselves, in the same water that contains the rubbish, as well as their excrements, of course; one of the advantages of a house on stilts is that the sewerage is taken care of. 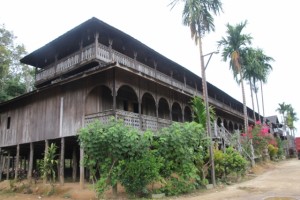 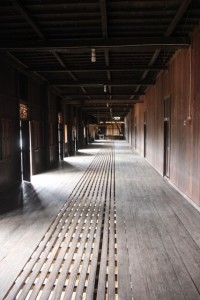 inside, the length of the longhouse is even more impressive 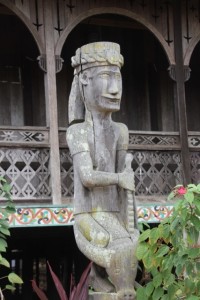 patong outside the longhouse, with moustache 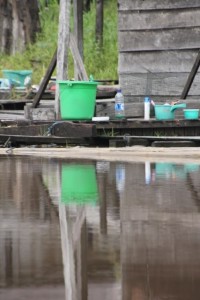 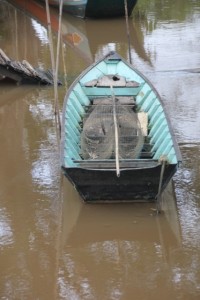 Mancong, the village we were heading for, is a case in point. Lovely village, all wooden houses on poles, connected with board walks above the water– it has been raining a lot, and the water is very high. And rubbish floating everywhere, to which I see a woman happily adding another pile. Which does distract, but only a little, from the magnificent two-story longhouse of Mancong, complete with patongs – tall wooden sculptures of people or spirits. We climb inside, but there is nobody, the place seems deserted; here and there the roof is caving in. Off the main hall, which stretches the full length of the longhouse, there are rooms, with stairs to the upper level. Unfortunately, the stairs are blocked: perhaps for the better, I wouldn’t want to come crashing down from the second floor.

After an hour, or so, we leave Mancong again. Despite the rubbish, the way back, back through the jungle the same way we came, is just as nice, with more birds and more monkeys. Absolutely brilliant. I am not sure the houseboats would have managed this.

next: back to the main river at Muara Pahu