As always, some reading material accompanies us on our trips, for the better understanding of what we see around us, for some historical context, and for the entertainment provided by other’s adventures. 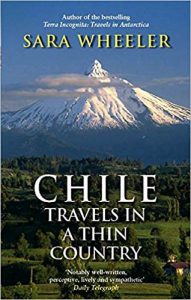 “Chile: Travels in a Thin Country” (1994) is Sara Wheeler’s account of a trip from north to south Chile, Ms Wheeler writes easily (although the occasional “wrinkled hills transmogrified into brown shale”, “the candelabra cacti”, and the “fecund valley floor”, all in one paragraph, may suggest otherwise), but her observations lack the depth of a good travel book, and focus too much on Ms Wheeler herself, and the variety of travel partners she encounters. Some of the local characters are very interesting, but she more often than not forgets to exploit the full potential of these contacts, we never get to know what they really think, how they really fit in. Likewise, occasionally she stumbles onto an interesting historical subject, which she then fails to explore to the full: it never gets beyond what you find in the average travel guide. I read the first half of the book, relevant to my upcoming trip, and then put it away. I don’t think I will ever finish it. 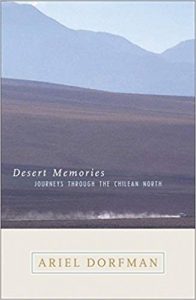 How different, then is Ariel Dorfman’s “Desert Memories: Journeys through the Chilean North” (2004). Mr Dorfman is a poet and a novelist, which comes back in his eloquent, lyrical writing about the issues that really matter in this part of the world. He is fascinated by, and at the same time fears the desert, the emptiness, yet finds there the world’s largest telescopes, the world’s largest Coppermine, and above all, Chile’s now abandoned nitrate ghost towns, one of the main themes of the book. The other theme is his personal quest to find what exactly happened to an old friend of him, who was executed under the dictatorship.

Mr Dorfman’s early background is one of an Allende supporter, and activist, who lived in exile during the Pinochet years. This aspect comes back frequently in the book, sometimes unnecessarily (as in the meeting with company representatives in the nitrate towns), but at other times it adds perspective. He has an impressive network of friends and acquaintances on whom he can call in every aspect of his journey, who open doors, and who provide an incredible amount of insight and experience. and which significantly adds to the value of Mr. Dorfmans account. Beautiful book.

The latest travel account on Chile in my library is the account of a four months sabbatical in 2015 by Australian Terry Hannan, “A Slice of Chile” (2017). Mr Hannan’s short chapters have all the hallmarks of a blog, written for family and friends back home, and apparently this was also the original format. It should have stayed this way. The first 70 pages or so are a series of bland observations, interspersed with references to acquaintances Mr Hannan and his wife meet, or memories from earlier international trips. Utterly uninteresting for the average reader. I quit after a two-page story about a mislaid key, which – as so much else here – had nothing to do with the subject in the title of the book. 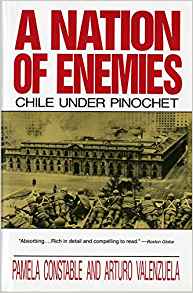 To understand Chile’s recent history, “A Nation of Enemies: Chile under Pinochet” (1993) by Pamela Constable and Arturo Valenzuela, is enlightening. The authors have spoken to hundreds of people, from all political shades, all social classes, from which they have pitched together an interesting analysis of the Pinochet era, from how the coup came about to how the dictator ultimately lost the referendum on his presidency. In a series of focused chapters several aspects are being discussed, from the army and the secret service and their increasingly unaccounted-for actions to the complacent and spineless judiciary, the petty politicians far removed from any sense of realism, and the economists that presided over the economic miracle that ultimately collapsed. The set up of the book is a bit chaotic, and repetitive because of it, and much of the text suffers from far too many details, which would have been better left out to make the point clearer. Yet, whilst I am not sure how ‘independent’ this review really is, it provides for fascinating reading about an utterly divided country. 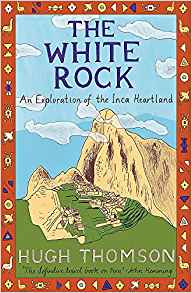 Erudite and entertaining, that is what travel books need to be. “The White Rock” (2001) by Hugh Thomson is exactly that. In 1982, still somewhere in his 20s, Mr. Thomson goes to Peru to re-discover an Inca ruin that was found, then lost again. This he achieves within the first 50 pages, or so, of the book, but luckily for us he spends the rest of his time looking for more, and traveling the old Inca empire. In the process, he comments on his interpretation of Inca ruins, the steep trails, the magnificent views, on the Inca past as it has been pieced together, and about the many adventurers who preceded him, foremost the “discoverer” of Machu Picchu, Hiram Bingham. In the process, he cleverly weaves together the history of the Incas, rise and internal strife, as well as rapid decline after the Spanish invasion. He returns in 1999, to finish where he left off, and pursue his quest for the latest Inca sites, pushed deepest into the jungle, and the ultimate fall of the last Inca. Great book, both before and during a trip to Peru! 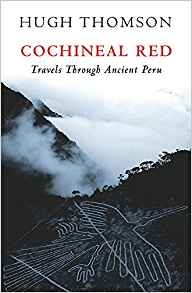 In “Cochineal Red” (2006) by Hugh Thomson, the author return to Peru, some 20 years after his first visit (documented in The White Rock). By now Mr Thomson has matured, from the adventurous young man of The White Rock, proposing innovative if fancy theories about the Incas, to a knowledgeable explorer, carefully weighing arguments from his vast network of archaeology-related friends and acquaintances. The book is less of a travelogue, and more focused on the archaeology, and many of its related sciences. In particular, Mr Thomas is charmed by the evidence provided by astro-archaeologists, about the advanced knowledge of the Incas, and many of its precursor civilisation, about astronomy. Those precursor civilisations makes the book so worthwhile, as not many people get beyond writing about the Inca, whilst there is so much more to discover in Peru. Which is exactly what Mr Thomas does, in this book. Caral, Chauvin, Nasca, Moche, the all get covered, and to top it off, Mr Thomas ends with participating in a mountain ceremony that may have originated very long ago,  a remnant of the pre-Columbian Peru. 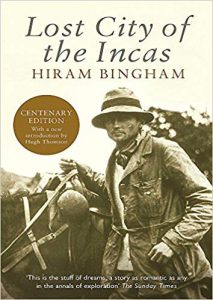 Of course, an important source for Mr Thomas’ books is Hiram Bingham’s  “Lost City of the Incas” (1952), in which he describes his expeditions that led to finding Machu Picchu, more than 40 years earlier in 1909 and 1911. 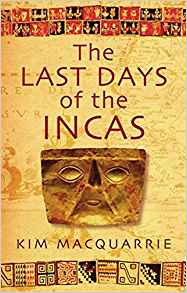 There are several books about the history of the Incas. The one I chose is Kim MacQuarrie’s “The Last days of the Incas” (2007), and it is a good choice. Mr MacQuarrie writes, in a very accessible style – sometimes perhaps a little too lightheartedly – about the rise and fall, over a very short period, of the Inca empire. Briefly about the rise, its first expansion in around 1470 and further growth in the years after, and mostly about the Spanish band of conquistadores under Francisco Pizarro and his half-brothers, who expertly manipulated the naïve Inca emperors and where necessary – and often unnecessary – demonstrated their cruelty in subduing the locals. Which ultimately, despite a 30 year guerrilla war, led to the empire’s demise, ending with the execution of the last Inca emperor Tupac Amaru in 1572. Mr MacQuarrie tries to explain why a bunch of 168 horsemen manage to capture an emperor protected by 80,000 warriors, and why time and again small groups of Spanish beat large armies of Incas: they simply proved invincible with their armour, their steel weapons and their horses. Even internal intrigues and open hostilities amongst various Spanish power brokers are not being exploited by the Incas. It remains hard to believe, but the facts of history are there.

The last few chapters are dedicated to the explorers who discovered several of the major Inca sites, Machu Picchu and Vilcabamba, in the 20th Century. Entertaining, reading how they frequently were more focussed on their own achievements, and on competing for fame, than on historical correctness.

Great book, great to read whilst traveling Peru and visiting all the sites that played a major role in the battle between Spaniards and Incas. 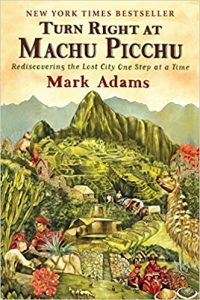 Another Peru travel book is “Turn Right at Machu Picchu” (2011), by Mark Adams. Mr. Adams tells several stories, one is that of Mr Adams himself, and another that of the Incas, and their empire’s quick demise at the hand of the Spanish. But the main concerns the life and obsessions of Hiram Bingham, the first to rediscover Machu Picchu (or not, there may have been other claimants to that title, too). The book is part biography, part following Mr Bingham in his tracks. And part trying to understand how he could have been so wrong in his identification of the last stronghold of the Incas, claiming that it was Machu Pichu whilst missing the obvious clues further into the jungle. Mr Adams works in the publishing business, yet, the book is too long, too many irrelevant elements in the story – not in the least Mr Adams’ life story itself and his penchant for metaphors which are often far-fetched, and not necessarily funny, however hard he is trying. Still, the book is nice enough to have finished it. So, a careful recommendation then. 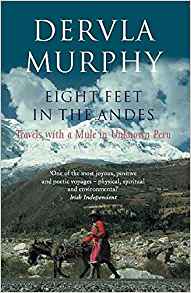 I have great admiration for Dervla Murphy; she has written many travel books in her life, some of which have made it to my reading lists; as a youngster on a bicycle to Afghanistan and as an distinguished lady of respectable age in Laos. Somewhere in between these books she wrote “Eight Feet in the Andes” (1983), where she tells of her travels in Peru, with daughter and donkey. And here again I admire her travel spirit, walking from Cajamarca in the north to Cusco in the south, in the process crossing many high passes, and equally many deep valleys. It is just that there is not much to tell, at least not in the first 100 pages, after which I put the book away. How many times can you describe the no doubt spectacular views, how many times can you elaborate on how difficult it was to find the path? The people she meets on the way, very few, are shy and evasive, and even if they meet up with Ms Murphy for a little longer, they remain strangers; I suspect this has to do with Ms Murphy’s limited Spanish language abilities, something she refers to herself several times. So, great trip, but not such a great travelogue.

We had “The Rough Guide to Chile” (2015 edition), often a good choice, and this time no different. Background information for starters, and good descriptions of the actual sites, towns, routes etc.

In addition we the Dutch language Dominicus guide “Chili en Paaseiland” (2010 edition), which we left at home, in the end. Not enough depth for a background guide, and not enough practical information for a travel guide.

In Peru we traveled with the “Lonely Planet” (2007 edition). Obviously, the hotel info, bus times etc was somewhat dated, but maps were useful, and LP does go to many places and does have lots of interesting suggestions.

We also had the “Insight Guide Peru”, which we had downloaded on the telephone, so that we could leave the book at home. Mistake, as the navigation and the readability of the book, on the telephone, is a nightmare, really poorly done. And the information was mostly limited to the main sites, missing out on lots of smaller locations that the much older LP did mention.