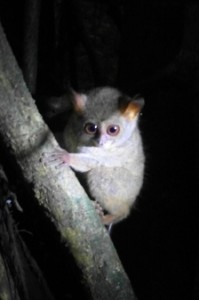 a tarsier, just as curious about us as we were about him (courtesy Sofia)

A jungle National Park where it is difficult spotting animals, for different reasons.

Our final few days in Sulawesi were earmarked for the Tangkoko National Park, touted as one of the most accessible parks in Indonesia, with guaranteed sightings of tarsiers, black crested macaques and hornbills. Tarsiers? Apparently, the smallest primates in the world, indigenous to parts of Indonesia and the Philippines. Black crested macaques are monkeys, and hornbills are birds. 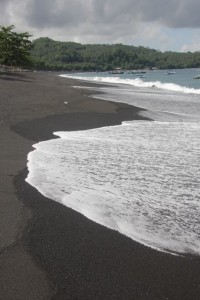 the black beach in Batuputih

So we made our way to Batuputih, a small coastal fishing village at the edge of the park, for a couple of jungle walks, one late afternoon and one early morning. The late afternoon one was a joke. It was a Sunday, which is the day that the park is also open for beach parties, or so it seems.  Large groups of youths, with cars and motorbikes, and blaring stereos, had taken possession of both the beach and the access road, which is also used by everybody else. Cars, motorbikes, stereos and people, especially youths, are the four things that make most noise in Indonesia, and if you have them all together, no tarsier or monkey or hornbill is going to come near. 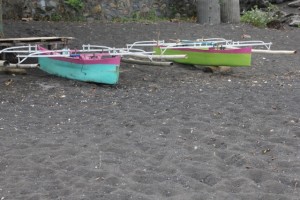 colourful fishing boats on the beach 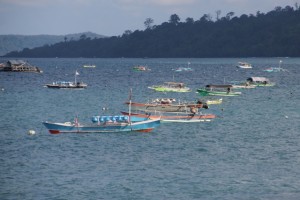 and in the sea 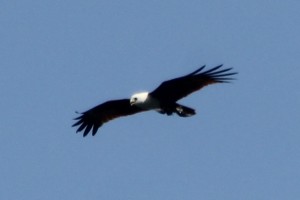 the fishermen have competition, a fish eagle 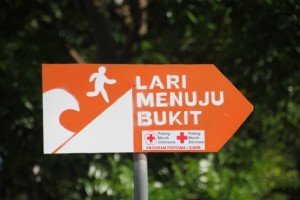 everywhere along the coast are these signs, pinting in the direction to higher grounds in case of a tsunami: excellent development

In the end we saw two tarsiers, indeed tiny little animals, but only because our guide walked straight up to the tree where they lived – apparently, tarsiers spent their entire life in the same tree. And then we walked straight back again, edged on by another group, whose guide was coming to visit the same tree, same tarsiers. Total and utter waste of time. 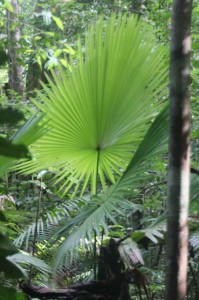 the jungle is quite attractive, even without animals 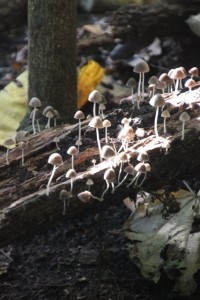 a humid environment, full of mushrooms 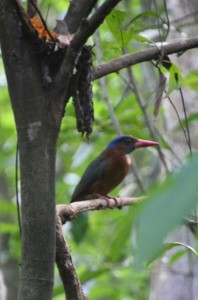 a kingfisher, difficult to spot in bewteen the dense foliage 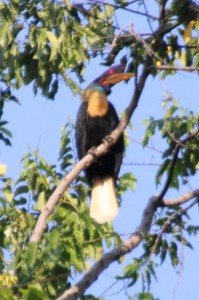 and a hornbill, equally difficult, so high up in the trees 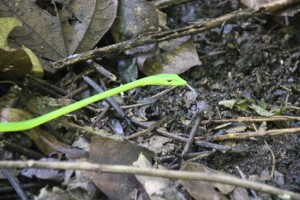 if you wouldn’s know better, this is just an especially green branch, no?

The next morning we spent another four hours walking, spotting an average of one animal per hour; one tarsier, one kingfisher and one hornbill – hornbills live in the tops of trees, and trees in the jungle are very tall. And a scary green snake who occupied the track we were following. The morning was saved when we encountered a large group of black crested macaques, all the way at the end of our walk, very close to the park entrance. Monkeys are always fun to watch, and so were these, the adults foraging, the younger ones chasing each other through the trees. 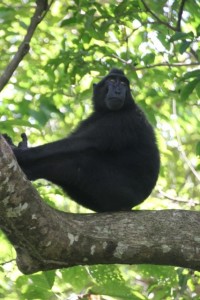 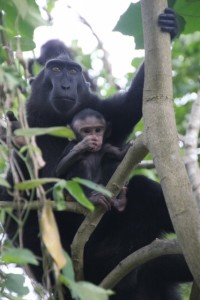 woman and child, so cute 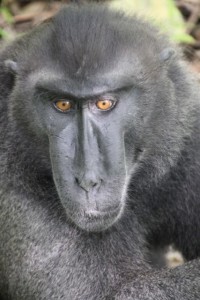 and one of the dominant males

The animals we didn’t see were the ants, or the mites, that attacked my ankles, but they surely made the most lasting impression of all. I have been scratching for at least another five days.

next: a special burial ground at Sawangan 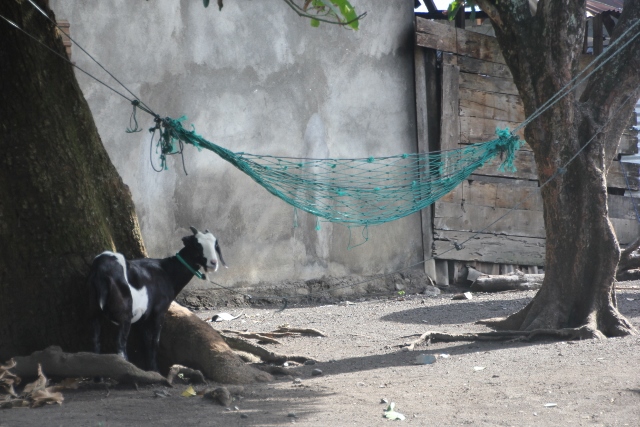 goat contemplating whether to get in the hammock or not